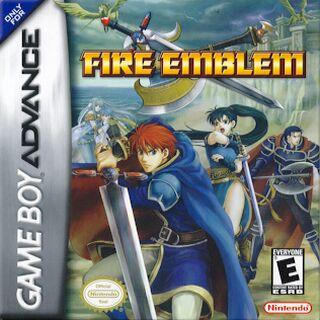 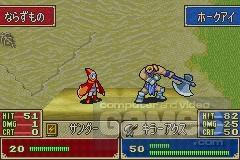 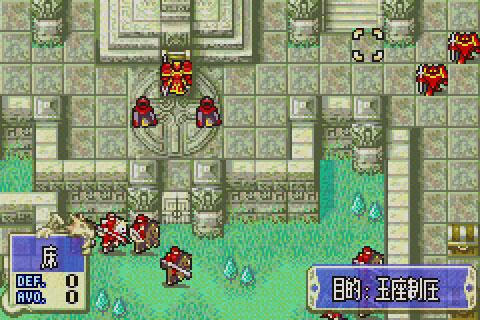 Fire Emblem is a tactical RPG. To the players of Advance Wars (which has become the de facto standard for this genre on the GBA), Fire Emblem does not feature the resource management of its military cousin. However, it replaces that element with a unit support system that makes groups of characters more interesting to manage carefully. RPG fans will also appreciate the more involved and pretty darn alright story that Fire Emblem features, with characters that are much more interesting than those developed in Advance Wars.

Battles can typically be played in 15-30 minute bursts (though some take as much as an hour to finish), which makes for excellent portable pacing. The characters are engrossing enough that you will find favorites and less favorites and even notice subtle character transformations as the game progresses. The battle system is simple enough that you may not even need to read the manual for the first few levels; but complex enough that later on you may decide to revisit the skills section in order to refine your techniques. I have had very little patience for RPGs in general, but this game is an exception. It drew me in much more effectively than Final Fantasy Tactics and has proven as addictive as the Advance War series over the past week and a half. In terms of graphics, the game uses the Golden Sun engine (also seen in Mario Golf), which gives the game a very Super Nintendo feel to it.

The turn based game play is centered around a series of triangles (rock paper scissors style) that is similar to Pokémon. Axes receive a boost when fighting characters wielding spears. Speared characters vs. swords, and sword characters vs. axes get similar boosts. In addition, there is a triangle for magic wielders as well. Finally, in battles between magic wielders and weapon characters there is also a form of hierarchy. Add to this, ranged weapons like bows, odd character classes like druids, dancers, bards, thieves, Pegasus riders, all sorts of special weapons and eventually the number of attacks begins to approximate infinity. Furthermore, there is a support system in the game that boosts a fighter's performance based on the positive relationship he or she might have with other characters in proximity. It may all begin to sound overly complex, but the game eases you in to it at such a measured pace that it never seems overwhelming. You only realize how much you've learned if, at some point, you decide to go back and try an early level again -- what originally seemed reasonably difficult is now a breeze.

The only downside to the game is the long-winded and skippable dialog, luckily there is (start button) an easy way to glide past the dialog which is especially important when playing a level for the second time through. I understand that cut scenes and voices are difficult to feature on a GBA game for a variety of reasons, but an editor was needed here. The need to play through a level a couple times will definitely arise on multiple occasions as some trial and error will be necessary to determine just how strong an enemy is and what sort of magic or range he or she possesses. With no real undo, unexpected deaths will happen about once per level and on at least a couple occasions you will wish there was a "go back" feature.

Along with Mario Golf and Astro Boy: Omega Factor, this game was one of the 3 GBA games that I became completely hooked on in the past year. As noted before it's the first RPG game I finished in probably close to a decade (yes, it has almost been that long since FF7). I think almost everyone will find a reason to like Fire Emblem and players who enjoy either Tactic games or Advance wars will almost certainly love it. I highly recommend this game.
Review Page Hits: 2 today (284 total)
mediahook