It may be a little rough around the edges, but this one's a keeper! 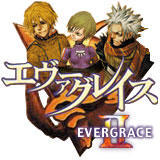 When I first saw this game for sale I was like "Hey this looks kinda cool." And then, when I found out that it was the prequel to EverGrace, I was like "How in the hell did that game get a prequel?" Don't get me wrong, I'm actually a fan of EverGrace (and now its prequel), but I never thought in a million years that it would receive a prequel or a sequel, at least outside of Japan, as it just didn't sell well enough. But to my surprise, Agetec decided to take a chance and published Forever Kingdom (EverGrace 2 in Japan) in the US. Anyway, enough of this meaningless talk, on to the review!!

Graphics: I personally thought that the graphics were quite good. The textures are nice, bright, crisp, and colorful. The shadowing effects were some of the best I had seen in a console Action/RPG, which makes the outside environments seem alive and simply breathtaking. There is a bit of slowdown and some nasty aliasing issues, but most PS2 games have aliasing issues so that's no big surprise. Score: A-

Sound: Forever Kingdom's composer should be given some type of award. I haven't heard game music this original since Xenogears, and it just fits. The voice acting is good...it was just edited badly. Whoever put the voices into the game did a terrible job as sometimes a character's voice will either be cut because its the end of a cutscene or it just wont be there at all. But all in all, I liked all the voices as they seemed to fit the game just like the music.

The sound effects were done very well, from bashing an enemy with your oversized ladle to slicing them up with your sword to bonking them on the head with an enormous ice hammer. Every weapon has a different sound, which is amazing considering the mass amount of different weapons there are in the game. The other sounds are great too, from crunching grass with your feet to moving slowly through some mud. Even though the graphics are really good, the sound department is where Forever Kingdom really shines. Score: A

Gameplay: The gameplay is very original, maybe too original for its own good. You run around in a three person party and you choose which character you want to control, which is great...that is, if your other characters ever attacked!! Normally the baddies will all be dead by the time your other party members even swing. Luckily, you can control their Palmira Actions, so they're not a total waste. Palmira Actions are this RPG's "special moves" or "magic". Each party member equips one accessory (there are quite a few throughout the game, but you start with three) that enables them to perform these "actions", and pretty much all of them are amazing.

You can also use these to "juggle" an opponent by somewhat careful timing. It's hard at first, but it becomes much easier as you get the hang of it. If you perform a juggle correctly, the enemy will drop Palmira pieces (they come in red, yellow, and blue, and are all worth a certain amount of points), which are used to upgrade the armor/weapons that you buy/find throughout the game. One last thing about the gameplay, YOU DO NOT LEVEL UP IN THIS GAME. Your accessories do, but the characters do not. You gain HP by equipping the armor you find throughout the game, and you and your other party members share all the HPs, due to some nasty magic curse that is cast upon you and your friends at the beginning of the game. So if one of them dies, you all die, which can make the game quite challenging (and annoying). Score: B-

Story: I don't want to say too much about the story due to spoilers, but here are a couple of things. This is the prequel to the PlayStation 2 game EverGrace. The story is mostly told during "camp" cutscenes ala Grandia and Grandia II. They're not too spectacular, but they get the job done. You will most likely want to play Evergrace before or after you play this game because it contains some backstory, or should I say forward story.

I found the story to be quite interesting and, when you put both games together, some stuff makes a lot more sense. Score: B+

Replay Value: The game is only about 10-12 hours long, but you'll probably want to play it more than once as that's the only way you can get a certain accessory. The arena adds some extra play time. But other than that, there's not much else. Score: B

All in all, I found Forever Kingdom to be a great game, and since you can pick it up for about $20 right now, it's definitely worth a purchase. I highly recommend this game. Overall Score: B+
Review Page Hits: 0 today (943 total)
mediahook