A 3rd Person shooter with Muscles, Gunting and Guns! And that's both sides! So sit down if you don't think you're Man enough! 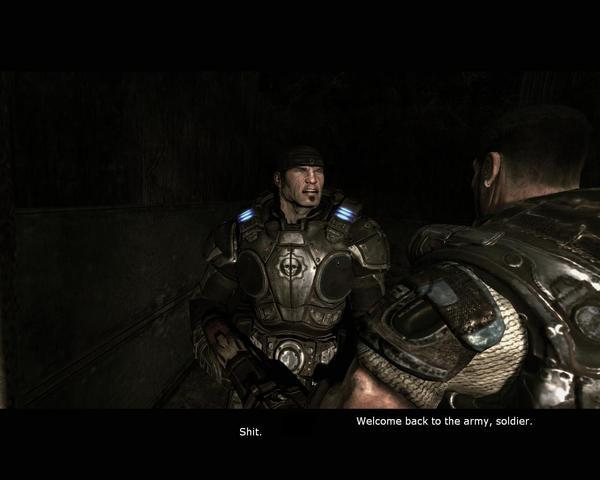 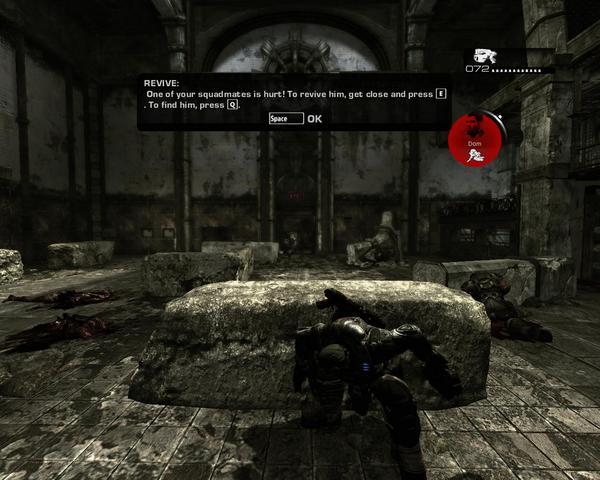 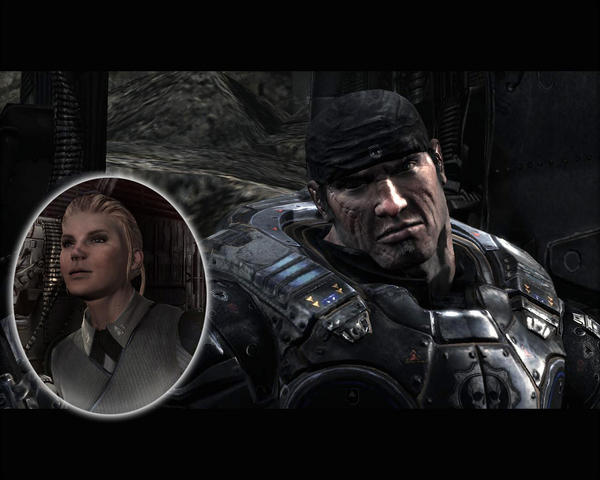 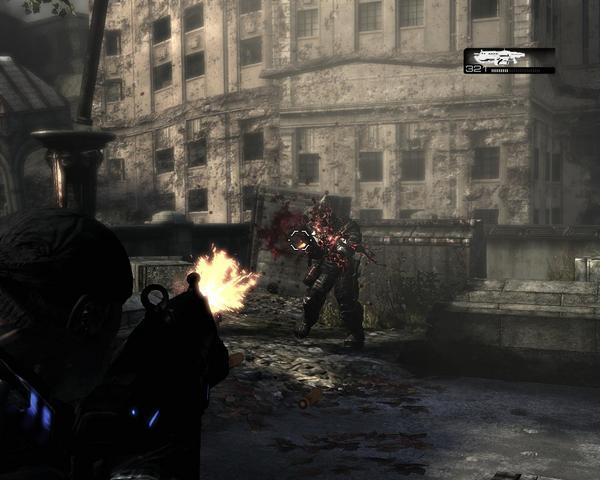 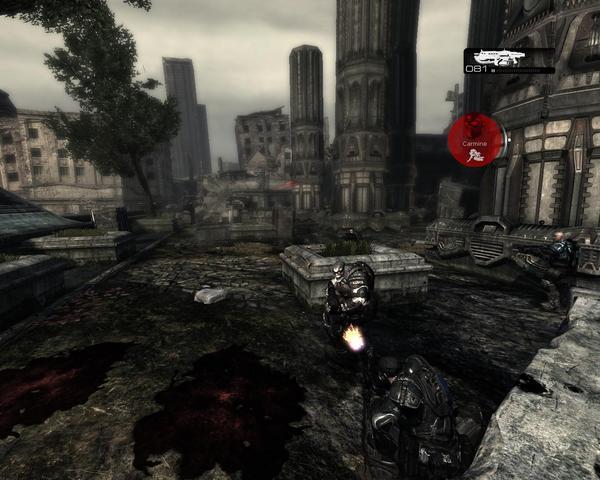 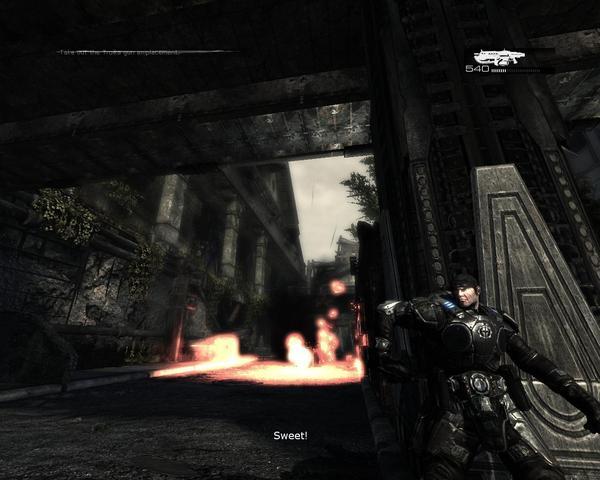 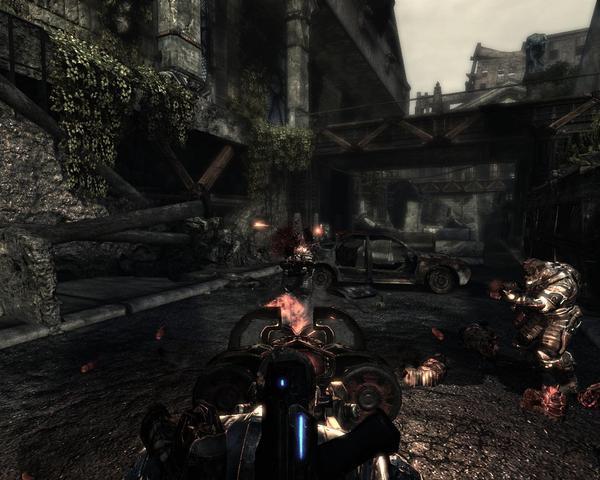 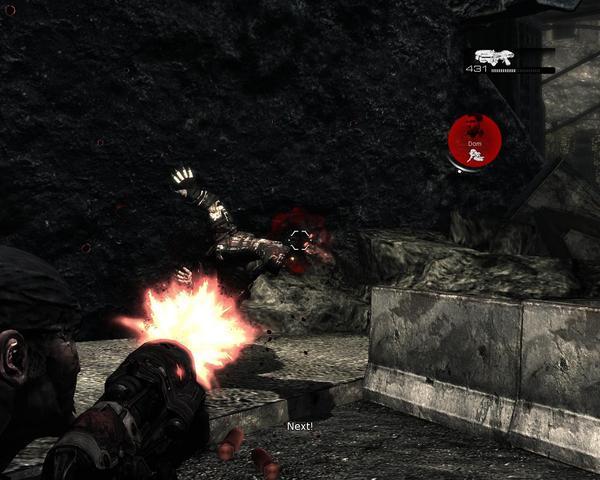 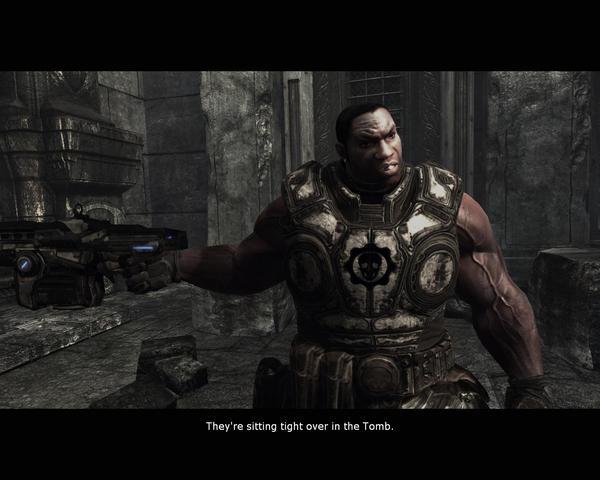 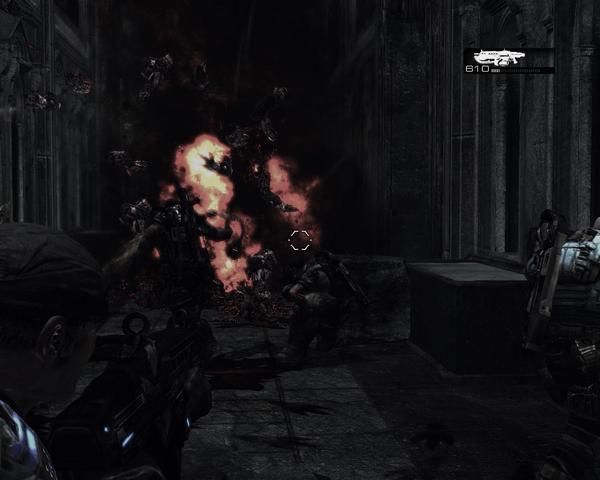 There is a land far in to the future, where the men are grrrrh and the enemies are WTF? In fact, that's what they should have called this game, "Grrrrh of WTF?" This is not a story driven game; in fact there isn't a hint of a story here.

Yes, you are told the basics - Locust Horde, bad guys, rise from the ground and kill humans. You are Marcus Fenix, who disobeys orders to save his father, and serves time in prison. The whole thing seems like an oddly placed story! Seeing that Marcus is such a tough burly man, and the Earth like planet, Sera, is being slaughtered by tough and burly mutants. You would think that they would need every man, woman and child to pick up a rifle, even if he did disobey an order!

But there is no intro to take you into this game at all. If you want to learn about the story you're going to have to pick up the instruction manual and read! I mean the cheek of it! (Didn't Epic know what century we live in?) However the funniest part of the story is during a cut scene, and fairly early on in the game. It's the prison stare, the first time Fenix has seen a woman in a long while. (See Pic!)

EDIT: I take that back about no introduction, there is one! Yet if you never find it, I wouldn't blame you, I only found out by accident. When you load the game, and it reaches the first Menu screen, asking you to press Enter, Don't! Wait for a minute and it should play! I haven't a clue why that is, and I suspect many people haven't seen the introduction movie, but they aren't missing much.

However, one clever little feature used to tell the story, and to great effect is the "Point of Interest" technique. This is a clever function that when something happens you can choose to look, and for how long. Say if a building is falling down, you can take a quick glance, stare intently, or not even acknowledge it. This gives you the freedom to carry on fighting, as most of the time that is what you will be doing, and also be aware of story plots in this game. A quick glance and you know something extra about the story, while living the thrill of the fight.

The story is of a real bleak future! With surprisingly muscle bound men/mutants in a war ravaged planet. There are plenty of bullets, but low on resources like food, time and I suppose baby oil. But it's the muscles on these guys that really gets to me! Forget the "Arms like Tree Trunks" it's more like, veins, and that gives me an inferiority complex. (Time for that New Year's resolution!)

Starting this game, I could not very well choose the easy difficulty level. I want to show them I had a pair, so I decided to play Hardcore. When you play, you are given the choice of Causal and Hardcore. The last option, Insane, is only available to you, after completing the game.

Hardcore! I wish it was! The Locusts take more of a pounding before going down, and other clever maneuvering tricks. But it's not really that difficult, but it is more satisfying when you take a Locust down, as you know he is more lead than mutant.

No, the real problem lies in your squad's AI. I know people generalize about muscle bound men. But these guys are so stupid it takes the biscuit jar and swallows it whole. Half the time you fight, you'll be running around and saving your fellow squad mates. For a game that uses cover by the bucket full, you would think your AI characters would do the same. That is until you realize that they can't die, and as soon as you have clear the area of bad guys, they recover instantly!

Recently I got a game pad for Christmas, so I thought I'd give it a go on this game. For some reason, everyone seems to like the inverted stick choice. The choice that was intended for plane simulators; and you would be wrong in thinking it's a simple case of going to the control options. Let me tell you, they cater for left-handed people, but not for pushing the stick forward, to mean forward.

This annoys me somewhat, because the whole game feels like it's been repackaged for the PC. I suppose this is how the console player used to feel. No longer are games being made for the PC, then repackaged for consoles. Now we will be on the receiving end. Everything about the game booklet screams Xbox 360, and while that isn't a bad thing. Did they really have to make us wait?

The other problem, and sometimes not, is the over use of the cover button. You get into/out of cover, cover slip, evade, mantle, run, and swat turn all with the same button. While this makes it easier to remember which button to press, another thing it does, it limits your choice.

Say I approach a wall, and I want to jump over it. Well it is not possible. First I would have to run up to the wall, then take cover behind it, finally I am able to jump over. While taking cover behind a wall is never a bad idea, limiting your choice makes the game feel a little bit repetitive. Plus on a little side note, running, called "Roadie Run", is a little hard to control.

But after all said and done, this is actually a fun game. And though it can be highly annoying at times, for the most part it has done a lot of things right. Epic have taken new innovating things and made it their own, one of them is reloading a weapon. Now it's an active event, rather than a waiting event as in all other games. This means you can speed up the process with good timing. Of course you can mess it up, taking longer, or just let it run its normal course. But I commend them for a simple tool and well used!

This is a very good single player game. But when you come to the multiplayer aspect, this really comes into its own. One of the greatest benefits of this game would be the fact that it takes a good few shots to take someone down. This means that teams really need to stick and work together, otherwise they will lose. This notion of strong teamwork takes games where they should be, played with good friends and enjoyed. However, you don't re-spawn when you are dead and have to wait for one side to lose. This is a nice change to the constant re-spawning all the time! Of course if you're the first to die, you might have to wait awhile!

Lastly the graphics are very detailed and well thought out. It reminds me a little of Tomb Raider Legend, only slightly more modern and without the visual sexiness. Where everything is in ruins and things are falling apart! Plus there is also a dark tint over everything, giving the impression of a barren and wasted society. The characters in all their huge proportions, spending most of their time behind well placed cover, are detailed and are believable. Even the blood and its dark thick red coat, comes across well. The colour scheme, mainly shades of red and black, is what paints this game. But is more than enough to immerse you into this depressing world, where you are the last hope.

While there is a basic story, it will be the last thing on your mind. It's all the tough guy attitude, the mindless violence, and shooting from cover that will keep you entertained. One last thing, there is an orbital satellite weapon, Hammer of Dawn, that you get to control. Mind you, you only get to use it outside and when Epic allows you too. I won't spoil it, but trust me it's worth playing just for that alone!