wikipedia link
no death play through 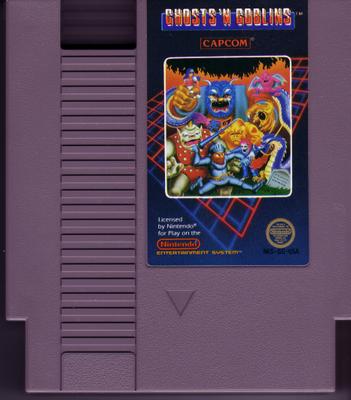 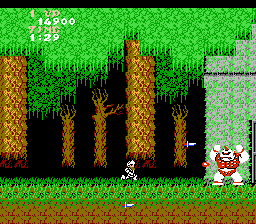 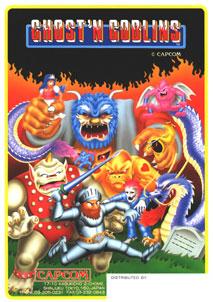 Ghosts `n Goblins... it sends a shiver of fear down vintage gamers backs. It is notorious for being almost silly in how difficult it is. I watched a good friend of mine play this game all the way through when I was a kid... I remember how satisfied he was when he finally beat the end boss, and then the game does that which is truly evil, it notifies you that you must play through a SECOND time to 'really' complete the game. That good friend of mine was a pleasant individual UNTIL Ghosts 'n Goblins pulled this trick on him... to this day he is scarred and kinda a jerk because of it.

But given some years and some experience with video games I have grown to more and more appreciate the old games, particularly NES games. Video games should be hard as they are about challenging ourselves to fill the role of someone on a quest, or trying to be the best, or killing all the evil, or whatever. Quests should not be easy, if I go on a quest and it is easy then it would be better to classify it as a vacation. Quests are about the possibility of dying, or failure, or redemption, or victory. With all of that said, keep this in mind when getting your ass handed to you in Ghosts 'n Goblins.

The music and sound, just as I have said in my other reviews of NES games, is nothing special, but it engages you in the game and doesn't interfere with gameplay. It isn't overly annoying and it is a game you can turn the sound off for since the sound is not necessary for gameplay.

Graphics are pretty standard fair for the NES, the movement is quick, making for a fast paced game, but the frame rate definitely suffers at times. The side scrolling nature of the game suffers from the white bar flash along the left side, which can delay your seeing an enemy approaching from the left at times. While the frame rate issue is noticeable I would say overall the game does not suffer much due to the issue.

Gameplay is simple, the red devil guy stole your chick so you have to go save her. This is the least overloaded with story game of all time. Basically the story is inferred from the beginning, you are sitting with your chick (at a picnic in the graveyard?), the Red Devil appears and takes her away. You put on your armor and begin your journey to get her back, that's it... oh, and you have an awesome beard, and everyone knows beards are awesome (right Bill?).

You can jump, you can shoot your weapon (lance, fire, shield, dagger--get the dagger) and you can move left and right. This is probably one of the reasons a lot of people complain about the difficulty of Ghosts 'n Goblins... because you can't blame the game mechanics, they are simple and straightforward. The only person you can blame when you die, and die, and die is yourself.

Your armor disappears if you get hit and you flash (indestructable) VERY MOMENTARILY. You get hit again you die. Sounds simple enough right? Except for the zombies (which appear immediately at the beginning, why were they not there for you and your chick's picnic?), ravens, bats, mini devils, knight ghosts, harpooning ghosts, giants, guys who puke on you, evil stalagmites, mini ghosts, dragons, shooting flames, jumping zombies and an incredibly easy final boss... except you have to beat him twice. When you do beat the boss the first time the message is very poorly translated from the japanese, it says: 'This room is an illusion and is a trap devisut by Satan. Go ahead dauntlessly! Make rapid progres!' No I didn't misspell that sentence, that is what is says. And even when you go through the game the second time (same enemies, same worlds), the English doesn't get any better. When you win it says: 'Congratulation This story is happy end. Thank you.' NEXT screen says: 'Being the wise and courageour knight that you are you feel strongth welling. In your body. Return to starting point. Challenge again!' and then beyond that it says: Player 1 game over with ominous music. Probably the biggest let down finish of one of the hardest games on the NES. But we don't play these games for the end credits, or the story, or the graphics, or the music. As I have said before and I still believe, we play these games for the immersion... the putting us into a different world for some time. The games that are best (for me anyways) are games that hours can pass and you don't notice. If I am playing a game and find myself thinking about sex with my wife or tacos or even a different game, then that game is a failure. But if I play a game, like Ghosts 'n Goblins, and I am transported to another world, no matter the graphics or sound or story, then the game has done its job. Hard or not, Ghosts 'n goblins does just that.

All this lends to an incredibly high replay value... it is difficult unless you memorize it and know it front to back. But difficult games make for good gameplay and that is what is a shame about current games. They hold your hand as they walk you through... the old games more or less left it up to you to discover.

Yes it is difficult, but all the best games are difficult. Quests should not be vacations, they should be life changing experiences... and if you play and complete Ghosts 'n Goblins you will deserve a vacation.
Review Page Hits: 2 today (225 total)
mediahook