The DS gets its first FPS, but most will forget about it once Metroid Prime Hunters is released. 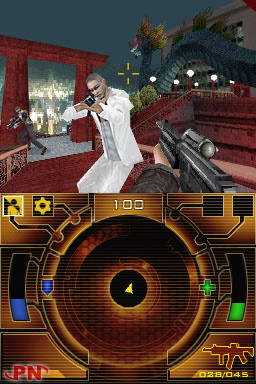 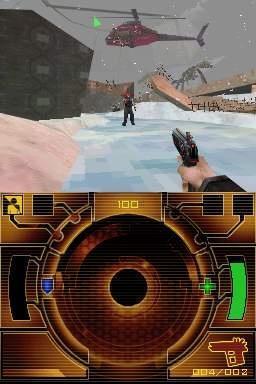 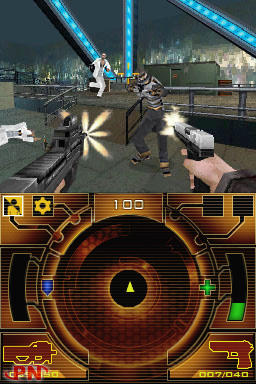 When I first heard there was a Goldeneye coming out for DS, and EA was taking their time sending out news and screenshots about it to websites, I prayed EA would start from scratch and make it totally different from last year's mediocre console versions. Well they didn't. Instead, they just ported last year's Goldeneye to the DS. The game isn't horrible by any means, but at times it feels like they wanted to just rush the game out to shelves so they could have the first DS FPS out there.

The graphics are good. The frame-rate doesn't drop when the screen is filled with enemies, and there isn't much draw-in in the distance. But on some occasions, you'll shoot an enemy and his body will fall through a wall. On the negative side, every enemy has the same death animation and too many of them all look the same.

The controls are solid, and I still feel the DS' d-pad and stylus combo are more precise than a PC's keyboard and mouse combo. Just don't use the default control scheme as it is kind of awkward.

The levels are pretty big and there is a nice variety of weapons to use. In single player, there are check points, but you can't save your game mid-level. And single player mode can be beaten in about 6 hours since your health slowly regenerates over time.

Luckily, you can play wirelessly with 7 other people with just one cartridge. In multiplayer mode, the levels are pretty big as well. In fact, if you only play with one other person, you'll probably spend more time searching for him than shooting at him.

The weapon sound effects aren't too bad, but the background music is absolutely horrid. It sounds like it's from the 8-bit era with all the beeps and boops. You'll probably want to keep the sound off completely.

Overall, as I said earlier, the game isn't horrible. If you need to play an FPS and are tired of the Metroid demo, Goldeneye should keep you entertained until the full version of Metroid Prime Hunters is released. And if for some reason you liked the console versions of Goldeneye last year, then you will definitely like this one.
Review Page Hits: 1 today (887 total)
mediahook