A documentary on wildlife, both human and animal 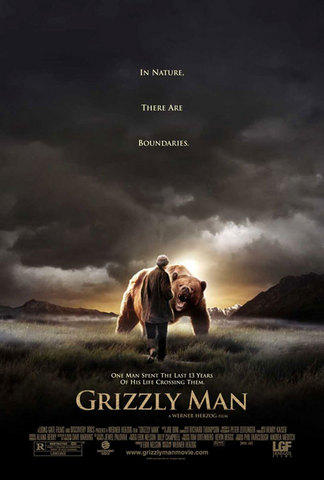 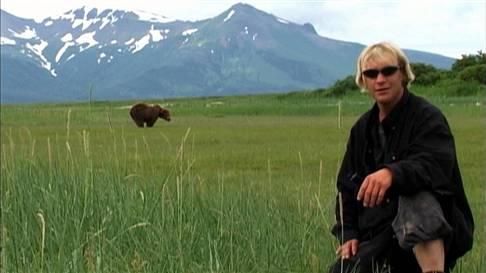 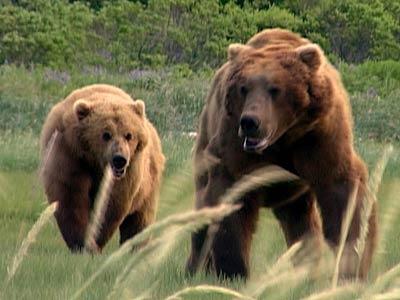 With the new Grizzly Man Diaries premiering on the Animal Planet network (September 2008), my interest in Timothy Treadwell peaked. Timothy is an environmentalist who spent 13 summers in a row in a secluded Alaskan national park with grizzly bears, foxes and wolves. The story told here is focused not only on his work with the bears, but also on Timothy's life and how he got to where he was.

Treadwell is Owen Wilson's doppelganger, except more feminine and a better nose. They have similar mannerisms and the same high pitched voice. The only other difference is that one is funny, and one is crazy. Treadwell fell in love with the Grizzlies after spending time in California trying to be an actor. As is the story with most failed actors he worked at a theme restaurant, drank and did lots of drugs. After an apparent overdoes on heroin, a stint with rehab, Treadwell somehow made his way up to Alaska. He fell in love with the bears and often gave credit to them for kicking his habit. As he says in the film, he needed to stay clean if he was to help the bears to his full potential.

The main story being told in this documentary is Treadwell's death, which came at the mouth of a bear. In the film many people involved in the tragedy are interviewed. From the pilot who came to remove the bear, Treadwell's long time friend who dropped him off every year to the coroner who examined the bodies. What is very interesting here is the reactions from these people which are polar opposites from one another. The E-Vac pilot thought Treadwell might be mildly retarded and got what he deserved. Treadwell's long time (ex) girlfriend speaks of his bravery and love for the bears. A museum curator who grew up in the harsh Alaskan area Treadwell visited spoke of Treadwell's disrespect for unspoken rules he and his fellow Alaskan's had with the bears. They were not to get to close. They had their world and we had ours. In his view Treadwell was crossing these lines and hurting the bears. If they were to get used to one human, they would look at them all the same and would be more easily poached.

Also interviewed are experts within the field of Bears and the Alaskan habitat. One of the most telling interviews is with an Alaskan Bear expert who has one of the most interesting facts within the film. Poaching hasn't been a problem in Alaska for 20 to 30 years. It happens here and there, but isn't a huge problem that Treadwell seems to think it his. This is one of his delusions. He repeatedly states how he is here to fiercely protect the bears from poachers, but in reality poachers are not a problem. Is this just an excuse to be as close to the bears as he is? An answer to that will never be found, but it's something that is very interesting to think about.

Besides being delusional Treadwell shows moments where he is paranoid, questions his sexuality and is deeply depressed when nature takes it course. His paranoia is shown in an expletive laced diatribe against the "Feds" and park rangers. He feels that the government has it out for him and doesn't want him to do his "life's work" of saving the bears. Then there is an extended self interview where he questions if it would be easier if he were gay. And then we see him sit next to a half eaten fox and we see how depressed he gets. Wasn't he prepared to see nature at its worst? As an environmentalist he should know that nature is cruel and harsh, much like the real world.

Despite all of these oddities within the person that is Timothy Treadwell, there is no question he died for what he believed in. He loved the bears and foxes more than anyone and even if he was protecting them from a non-existent foe, he was protecting them nonetheless. When he wasn't in the Alaskan wilderness, he was touring the country going to schools and teaching children about bears and telling this his wild and crazy stories from the wild. He did all of this, every bit, for free. Some may look at a person like this and think he is crazy to do this, but at least he's getting a big paycheck. Not so in this case. Everything here was done gratis.

From a visual perspective, the film is a mixed bag. All footage with Treadwell is on a DV cam. He only had the camera his last five years of his annual expedition. It was obvious from several scenes that he was filming this in hopes to make a TV show. Werner Herzog (Director and Narrator) shows several clips where Treadwell does a dozen takes to get one scene right. It makes sense that Treadwell would try to do a show. No one has gotten as close to bears as he has and he does seem to understand their behavior for someone not formally trained in this field. The other portion of the movie that Herzog films is great. He shows beautiful Alaskan landscapes and gives nice wide shots so that we can see everything he is seeing. Herzog is also the person doing the interviews of the many different people involved and those who knew Treadwell. This brings me to my one problem with this film. There is one of Treadwell's friends who is a former actor and he is obviously acting out his parts. It's had to watch a true life story with such bad acting from on of the interviewees, but thankfully this is a small part of the film and doesn't take much away.

The most interesting scene in the film is where not much happens to the eye of the viewer. Herzog is sitting with Treadwell's ex and listening to a tape. This is the tape of Treadwell and his female companion being eaten alive. Treadwell obviously tried to film a bear he saw approaching and that bear ended up eating him. Treadwell didn't have time to get the lens cap off but the audio is recorded in gruesome detail. Herzog describes what he hears and then tells the ex to destroy the tape. No one needs to hear that. And we don't. He gives us small bits and details of what he heard and leaves the rest up to our imagination. While I am sure some would want to hear what happened, I think that not hearing puts our imagination into overdrive and makes us think for ourselves. More often than not, that is ten times worse then reality.

So the bottom line is if this is worth watching. I think for anyone who loves nature it's a must. For anyone who loves seeing another human on the brink of destruction it's a must. The best part about this film is that when it ends, there is a lot of discussion to take place. Was he crazy? Did he get to close to the bears? Was he harassed by the government? All of this is left for us to decide as Herzog does an excellent job of not picking a side. He just shows the story from afar and we get to make a choice. Was he crazy, or was he brilliant?