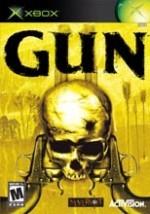 Set in a fictional, Hollywood-style "Wild Wild West," Gun (by Neversoft, the developer of the Tony Hawk franchise) sets us in the spurs of one, Colton White. His "father" has been murdered and he now seeks out revenge against those responsible while simultaneously searching for the true nature of his past. As Colton makes his way in-between the game's two cities, we are treated to a delicious atmosphere Slurpee. "Made with landscapes rich with vibrancy, characters chalk full of awesome voice acting, all blended together in a sea of a time long past yet still deeply romanticized." Mmm...tasty.

Taste is where Gun really shines. The game is brimming with sweet and simple satisfactions. A clichéd Wild West story is saved from mediocrity by careful voice actor casting, including Hollywood actors such as Thomas Jane (61*, Punisher) and Kris Kristofferson (Blade trilogy). All of the actors really bring the characters and story to the screen in a believable, enjoyable fashion. None of the characters involved in each cut scene feels miscast, overacted, or ridiculous; something many current generation games cannot boast (Star Ocean, I'm looking at you). The score isn't bad either, but it is far from memorable.

Sprawling landscapes with rolling hills, gigantic mountain faces, dirty and crowded towns -- all the staple Wild West environments are wonderfully recreated in digital form. Character models are obviously created from a Tony Hawk engine, with their decent, but far from award-winning visuals and animations. This really stands out when you talk to NPCs. Why the hell does everyone shrug when I talk to them?

That is not the only thing Neversoft carries over from its landmark series. Not unlike Tony Hawk, Gun has true "pick up and play" controls. Silky smooth controls coupled with well-balanced missions keep the controlled game experience from becoming oversaturated, unnecessarily frustrating, or flat-out boring. The short, tangible in-game tutorials do help those who may be manual-phobic, but really, just a couple of minutes with the game and almost everything comes out naturally. There is really no situation where the controls do not handle with relative ease with the except of two: the roll, which should be a simple move to pull off but ultimately becomes too much work to be consistently useful, and the lack of a Solid Snake corner-look, where getting lit up after turning a blind corner shows how obviously useful it could have been.

Missions, both story-progressing and optional missions, have a great range, giving a taste test of everything. From shootouts to fetch quests, to herding or sneaking, nothing is left out. There are even some Texas Hold 'em poker missions, but are unfortunately pathetic. Yahoo's version is more entertaining and graphically appealing. It's a shame that nothing innovated was added to the mission mix, something involving a lasso perhaps. There are no mystery flavors here. At least the amount of missions is rather slim, keeping the redundant aftertaste to a minimum, but that's the only plus the short game time receives.

I was rather let down that I finished the game at nearly 80% completed in less than 8 hours with very few optional missions left to finish. It was like the end of a Slurpee, when you are just left with the tasteless, white slush that isn't worth finishing. But you want more, or at least what's left to taste just as sweet as everything that has come before. In the end, you are left with your sugar craving satisfied enough to welcome future visits, but it's hard to not feel like it could have been more. Sure, Cherry and Cola are tried-and-true flavors, but how about something new and crazy to accompany what we know tasted good next time?
Review Page Hits: 0 today (113 total)
mediahook