While new to arcade sticks the Hori Real Arcade Pro EX-SE makes it easy to pull off those difficult moves that controllers have issues with. The stick works perfectly and the buttons are well laid out and responsive. Overall a fantastic product. 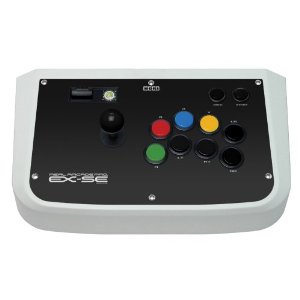 I've not used a fighting stick in maybe 8-9 years and that was in the arcades playing Tekken Tag Tournament, a very different experience than a console stick. So I'd have to consider myself a complete arcade stick noob. I've always liked fighting games but they are extremely difficult to play with the Xbox 360 controller. I tried the XFPS with a PS2 controller and didn't like it at all, so I sold it off and bought a new Hori Real Arcade Pro EX-SE.

I'll start with opening the box, the unit is heavy. Not bad heavy, but "solidly built" heavy, a big plus. I don't want some little chincy toy that's going to slide all over the place or break with use. There is nothing in the box except the stick, no instructions, no warranty info, just a stick. The stick is wired and the cord is maybe 6 feet long, plenty long for me.

I fired up Tekken 6 and the game instantly recognized that I was using an arcade stick and modified the controls accordingly. I don't know if it's because it's a Hori product (Hori also makes the official Tekken 6 stick) or if this would be true for a Mad Catz stick as well. You can modify the layout of the buttons or map the other 4 buttons not needed for Tekken, I left it stock though.

I started off in practice mode knowing that I was going to be bad. The stick certainly takes some getting used to. Thankfully there is not a wide range of motion, something you don't want when trying to pull off quick move inputs. Circular motions are actually the most difficult thing for me to pull off, I think it's because of the square gate. Arcade sticks use either square or octagonal gates to limit the range of motion of the stick. With an octagonal gate you have a stop at your NW, NE, SW, SE directions that makes the range of motion more of a circle. With a square those directions are open so it takes some getting used to.

After practicing and starting to get the hang of it (or so I thought) I decided to take it online and try the stick against other people. While I didn't to overly fantastic (granted, I'd only been using a stick for 30 minutes) it is an absolute blast to use. You've got the mic hookup so you can talk to people, the buttons are well laid out, it was just alot of fun and playing in a public lobby on Tekken felt like being back in an arcade again.

To wrap up my first evening with the stick I threw on the XBLA game Frogger (which I won for free in a contest) and played it with the stick. Even it's a lot more fun with the stick...as much fun as Frogger can be.

A few days later I ordered Street Fighter IV off of Amazon. Technically this is the second time I purchased the game...I bought it right after it was released but the controls were so awful with the Xbox 360 pad that I gave up and sold it soon after. It arrived today and I anxiously threw it in the 360 so I could try it with the Hori stick.

Let me start off by saying there is night and day difference between the control schemes. Controlling your character is easy and quick movements are a snap. I think that as a whole Street Fighter is much more forgiving with move inputs because half circle motions didn't give me any issues at all. Button layout is good although it still takes a lot of getting used to (with Tekken you've only go 4 buttons to worry about which you can cover at all times, with SFIV you have 6 buttons and have to move your fingers to hit 'em all).

Once again the enjoyment factor of using the stick is there, it feels like I'm in an arcade. I went from having bad memories of a mediocre game to really enjoying my experience (although I'll always be a Tekken fan first and foremost).

If you are a serious fighting game lover or just want a fun way to play the games give this a whirl.
Review Page Hits: 0 today (178 total)
mediahook