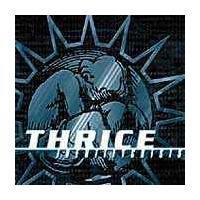 If you aren't familiar with Thrice, their music is like hardcore, only with pop-punk vocals and some metal riffs thrown in for good measure. I assumed that Thrice was just some lame hardcore band, but was shocked as I realized the technicality of their music. The backbone behind Thrice lies in the dual guitar onslaught of Teppei Teranishi and vocalist Dustin Kensrue. Being a sucker for technical punk rock, I instantly fell in love with it, (well sort of). My respect toward Thrice has increased greatly. They manage to combine the rock out and scream elements of great hardcore, but instead of snotty vocals, you are blessed with much softer, So Cal pop-punk harmonies; something that has been attempted but never seemed to work before. On top of that they throw in technical metal riffs when you least expect them.

While Thrice seems to have an excellent idea in the making, the deliverance is only mediocre. Often times, it's difficult to try to find the sound the band is going for, with styles and genres conflicting with each other. The title track is a great example of this. The song starts off with a stereo fade-in and immediately goes into massive metal-riffage. In an attempt to sound like Metallica, they end up sounding more like the Maiden/Priest sound of the 80's, which isn't a bad thing in my opinion. The southern California pop-punk vocals kick and as soon as the listener is settled, they are blasted by hardcore screaming. The lyrics also contradict the sound of the band. Emo-core sounding lyrics reference God in the title track and overall just sound fake ("Image marred by self-infliction/Private wars on my soul waged/Heart is scarred by dual volitions/Juxtaposed and both engaged/Kindle flame, a test of faith/Pray help me see it through/I put all my trust in you.../End this crisis of identity.") Because of this listeners will either praise or hate Thrice. They will either be hated by the hardcore kids or be loved by the pop-punk kids looking for something more rocking. I personally have mixed feelings.

The second track "Phoenix Ignition" starts off acousticly with vocal harmonies and then bashes into a hardcore punk attack. The track then recovers by going into an incredible technical breakdown, something Thrice is great at doing. Thrice however, sounds best on tracks like "Ultra-Blue" and "In Your Hands", which are pretty much straight up California pop-punk rockers. The hardcore of "As The Ruin Falls" and "Torch to End All Torches" are separated by the sound of an early spring rain shower in the track "Next Day", or perhaps it's more like a thunderstorm. My favorite tracks on "Identity Crisis" are "Unquestioned Answers" and "T & C", a song that appeared on the bands now non-existent first record. They are technical punk songs blending the trademark Thrice hardcore/pop-punk sound. "Unquestioned Answers" sounds almost reminiscent of the late Sick of Change, one of the best technical So Cal punk bands ever. Maybe that's why I like it.

"Identity Crisis" is a promising debut (if you don't count the first CD) from a very talented punk band. They have great ideas, but they aren't executed as well as they could be. It seemed as if Thrice hadn't quite found their sound yet, but they managed to prove everyone wrong on their next album, "The Illusion of Safety", which is superior to "Identity Crisis" in every way. Pick "Identity Crisis" up if you are a fan of the band, but if you are just getting into Thrice, I suggest their new record, "The Illusion of Safety", which is musically perfect for the band.