The Illusion of Safety (Thrice)

Thrice's 'The Illusion of Safety' has exceeded my expectations and then some. 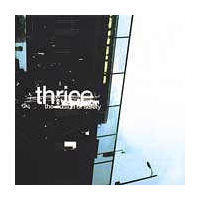 I remember I had this record before the album actually hit stores. I didn't think much of it back, but then one day I listened and was extremely impressed. I never realized how good of a band Thrice actually is.

Thrice's sound is very difficult to pin down. The songs on "The Illusion of Safety" are from the heart and are full of passion. Unlike their previous release, "Identity Crisis", the band has found some good subject matter to sing about. Each song is delicately balanced with a blend of 80's thrash, classic British metal, and post-punk melodies. The beats are driving and pounding, and the guitar riffs will have chills running down your back. Unlike most other bands of the emocore genre, Thrice takes a stab at pop-punk, mixing grand guitar harmonies with the shrill of hardcore vocal wails. Each track is full of melodic hooks that will grab you from your seat right from the get go.

They are most prominent of the album's singles are "Deadbolt" (which has now spawned a video in rotation on MTV 2) and "Betrayal is a Symptom". "Kill Me Quickly" features some insane vocal and guitar harmonies, and the thrash of "In Years to Come" will have you pounding your fist in the air like its your job. If that doesn't sound appealing, try the metal/Incubus sound of "The Red Death" or the unbelievable lyrics blended with metallic riffs found in "To Awake and Avenge the Dead". "The Illusion of Safety" closes with "The Beltsville Crucible" which features an incredible guitar intro.

On their third actual release, Thrice has definitely found their sound, something they hadn't quite found on their two previous records. "The Illusion of Safety" is an emocore record of epic proportions. Now that they are signed to Island, all the label needs to do is hook these guys up with a big producer and they have soon-to-be Top Ten stars.