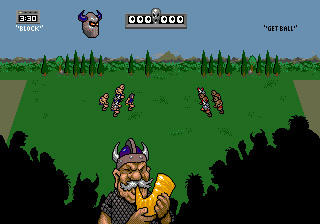 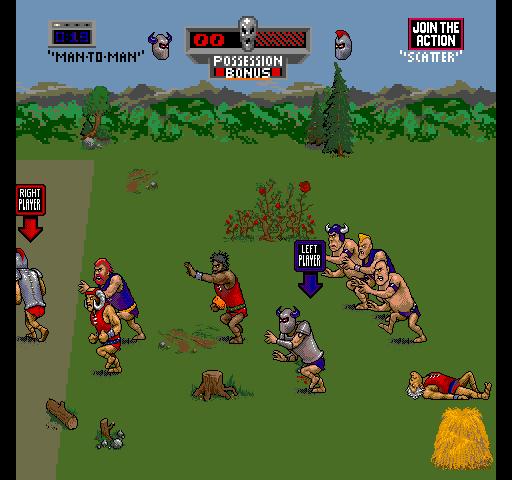 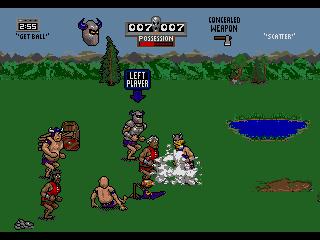 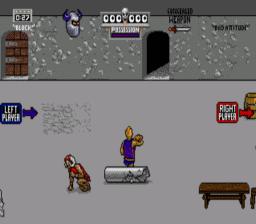 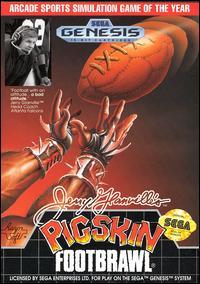 I played a lot of games when I was young man. I played action games, fighting games, role-playing games, but the only games I usually stayed away from were football games. It's not because they were to hard, it was just because they didn't appeal to me as a gamer. If I wanted to go play football I would just go outside and play, but when I played Jerry Glanville's Pigskin Footbrawl I saw a football game that was unlike any other I had played at the time.

This game wasn't as technical as lets say Mutant League Football due to the fact that it's rugby and doesn't follow a strategy or plays/downs system. It was also originally released as an arcade game, so that makes the game brutally short. That being said though this game didn't need a whole lot of depth. It relied on the sheer brutality of the middle ages mixed with the fast paced pummeling of a rugby match.

Let's get ready to Feudal
When you start a game you will be the blue team, or you'll be red if you are the second controller in a two player match-up. As mentioned before, this game is incredibly short with little to no replay value if you're just looking for a one player game. Multiplayer is where this game shines and you'll no doubt want to keep playing with your friends to see who can decapitate, hang, impale, gouge, and completely destroy one another.

Ze Gameplay
The ball is kicked and you are utterly at a loss for words at what is about to happen next. You're running through defenders while trying to dodge death inducing obstacles still all the while trying to grab weapons that you can use to kill approaching defenders. Basically when you run into defenders you get into a Tasmanian devil like scuffle where your team mates can join in on the dog pile which might increase your chances of winning, but if you posses no weapons and the other team does then prepare to witness your fate. Reversing roles as now you are defending it's your job to recover the ball and kill anyone who stands in your way. As well as just moving around annihilating everything you can also choose how you want your team mates to approach as you can select a kind of "play" to control them....uh...sort of. There are also cutscenes when you score a touchdown in which it switches to your spirited fans as they show their team loyalty.


Now halftime, in a sense, is the time of the game where you change to the coliseum arena, and get the ability to check out the stats. Stats being of course how many times you hung someone with a rope, impaled an unlucky player, etc.

A nice feature implemented into the game is if your team is getting creamed then you will have the pleasure of witnessing the TROLL!!!!

It is a special team member that you can acquire to help you make an amazing comeback. As well as having superior defense skills and equally amazing speed he also is different for each team. Both teams can get the troll but I'm still unsure as to how this occurs. Only happened about twice for me.

One bad apple to point out in this game would be that when you're running through the field there are way to many obstacles. I find that playing it more helps to memorize where certain traps are, but still it should not be this hard to get from one end of the the field to the other.

Sound me'lady
Sound is a big let-down in this game. You often here the word,"ouch" as you play. At first it's cool, but it soon becomes pretty annoying. You also hear a lot of punching and kicking as well as other stock SFX.

Controls me'lord
Controls are simple. Sega controls have never been really complicated, but these controls are a far cry from anything hard. Picking this game up and playing it will not be a challenge, unless of course you don't have hands.

Visuals Sire
For it's time the visuals weren't that bad. Textured terrains and gory fatalities make for an interesting time. Each player on the team is also different and this makes for a more believable game of football, even though it's in the middle ages....and when you kill people they magically come back. Did I mention the troll?

My kingdom for an overall gameplay review
So it's not bad as a game. I would pick this game up immediately just to take some of my friends through this amazing game experience. If you have no friends though, and spend the weekends alone than you will find yourself bored after playing through this a couple times. I can't guarantee that you will like this game but.....