When did Sonic turn into a fat white dude who rides an Excite Bike.... oh wait, that's not Sonic, it's Joe Danger. 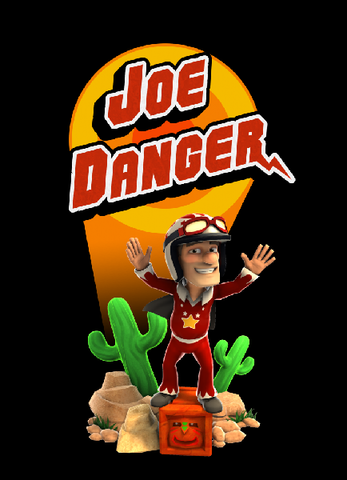 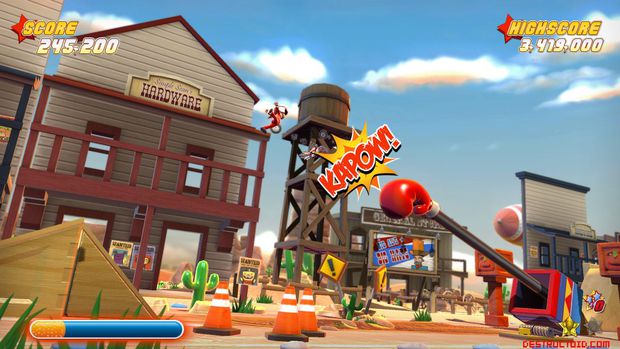 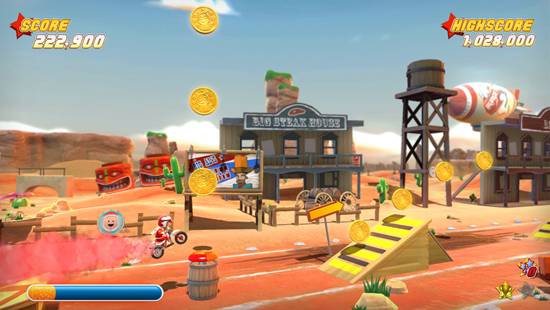 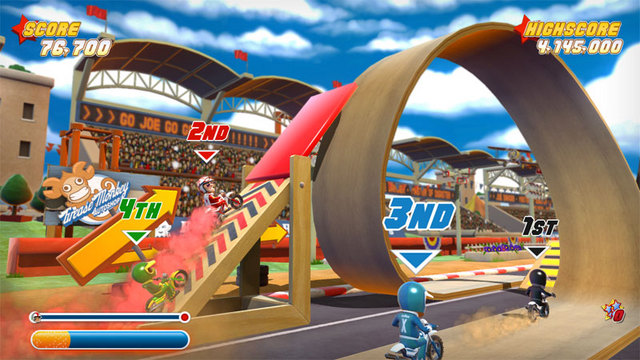 The Playstation Network is home to some of this generations most creative (and fun) games. Whether it's something like the poem that is Flower or the trippy travels of PixelJunk Eden, there is quite a lot of creativity to be found in Sony's online marketplace. Their newest standout title isn't quite as artistic as the previous games I mentioned, but what it lacks in creativity it makes up for with some of the best game play I have ever seen out of a download only title.

Joe Danger is a dare-devil in the same vein as Evel Knievel or Super Dave, the only problem is that he suffered an injury and fell out of grace with the public. Your job is to take Joe throughout dozens of levels so that he can be as famous as he once was. The story is as paper thin as they come, but lets just say the story here really doesn't matter.

You control Joe on his stunt bike and travel throughout levels set up with stunts, traps and targets. The control scheme is very unique when compared to similar titles but it works very well. You use the R2 button to go forward and the L2 button to go backwards. These buttons are key as you aim yourself at targets or try to collect stars. You can also do different tricks when in the air using the L1 and R1 buttons. Boost is controlled with X and is very important to time correctly when looking to complete certain objectives. Circle is used for jumping. The controls are as responsive as you want them to be in a title that takes timing and precision more seriously than you might think.

In my summary I used the reference of Sonic the Hedgehog as well as Nintendo's classic Excitebike. That might sound like an odd mix, but it works perfectly. The game takes the best of Sonic's 2D days as you need to use speed to get through the levels while jumping, boosting and flipping throughout. The Excitebike elements are in the track design and level editor. If you could imagine Sonic riding through an Excitebike level, you got Joe Danger.

Each of the levels have different objectives with many levels having lots of different objectives. The objectives on any level include collecting stars, hitting placed targets, 100% combo the level (do tricks the entire race), finding hidden stars and collecting coins (which are different from the stars as they are timed). Having multiple objectives on each level really helps to increase the replay value as you are going to want to play certain levels over and over to perfect it and get all of it's badges (which are received for each objective completed). The many objectives also bring out the difficulty in the game, specifically after the midway point of your progression. You will literally have to memorize levels and probably try them between 10 and 25 times depending on your skill. Certain levels need to be played perfectly in order to complete them. While the difficulty ramps up in the latter half of the game, it's not so frustrating that it turns you off. If anything it made me want to keep trying so I could feel the accomplishment of getting all those badges.

The game also has a very competent online component with online races and a level editor. I haven't seen the title bundled in with Sony's "Play, Create, Share" mantra but it really should be. The level editor is simple to use and allows for a lot of customization, much like LittleBigPlanet or ModNation Racers. The inclusion of a level editor and the ability to download what others have created takes the replay up a notch. This is one $15 game that you will get your money's worth (and then some). There is also split screen action for you and another person in your house which is great if you don't want to go online.

This is a title that is a must own for Playstation 3 owners. For older gamers, the title does a fantastic job of updating some of our favorites from the NES and Genesis days. For younger gamers it's just a ton of fun to play, even if you don't have the historic reference point. At $15 it's hard to find a better value. There are a lot of single player levels, a level creator and a fun online. The title's popularity out of the gate might mean we see some downloadable content sooner or later. If you got the cash, there isn't a reason to pass this by.
Review Page Hits: 0 today (74 total)
mediahook