Find it on ebay
Other reviews 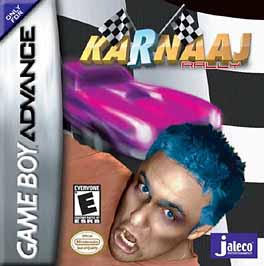 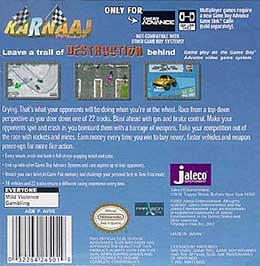 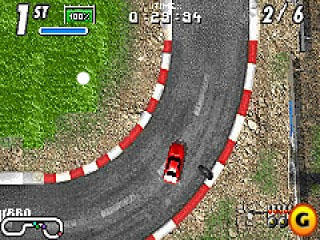 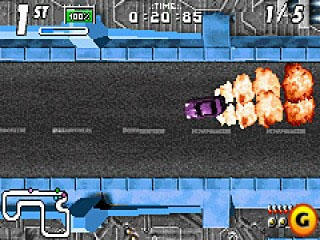 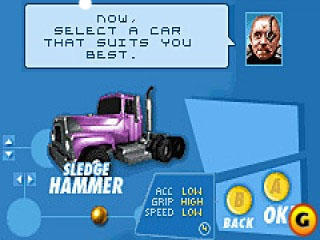 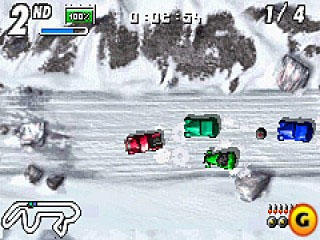 I purchased this game for $9.99 at a Kaybee toys, and for that price I should probably give it a B+, as it is a huge value at that cost. Still, avoiding the concept of value the game is more of an objective C+. It does what it does extremely well, but the lack of real originality, some slightly dark graphics, and an AI that can at times be extremely frustrating serve to bring the game back towards the middle of the racing heap, rather than as a shining star at the top. Still, the middle ain't bad for $10.

If you enjoyed Super Sprint, Rock and Roll Racing or Micro Machines, there is more of the same here. Its a top down racing game with some limited (mines and rockets) vehicular combat. The tracks are for the most part very interesting. While they do require some memorization of key turns, you will be competitive in most after the second or third time you try them. There are one or two tracks that can be confusing, particularly those with crisscrossing pathways.

There is limited interaction with the courses. You'll occasionally knock over a pylon or disturb a rock but other than that... nothing doing. On the other hand, the actual driving is pretty crisp, the turbo is really fun, and picking up items on the course (other than mines which you have to buy) is a breeze. Everything works as it should.

The AI is a bit frustrating, particularly later in the game. There is no handicap so races can be blowout lapped affairs, which is fine in some sense. Ultimately if you don't get out in front after the first lap you are unlikely to win. I recommend a quick boost followed by either a couple missiles or mines right at the beginning to create a log jam behind - enabling you to jump out in front. Using turbo after a turn or after running over a mine is a prime use. The different drivers all have consistent strategies (big tough guys, quick little zippy dudes, etc) and single cars don't dominate whole circuits which I find nice. This means its very possible to win a 10 race circuit while finishing last once and 2nd or 3rd a few times, since all the 1st place victories will not go to a single other car.

After each race you are given a budget to repair your car, add weapons or armor, or improve the engine or tires. Depending on the type of car you have taken (fast/hard to control, slow/easy to control, or medium) these upgrades can help you re-balance your car. I personally found the fast cars almost uncontrollable in the later rounds without at least 2 tire upgrades. First priority is to fix your car, since if it is destroyed during a race, you forfeit. Second priority almost always is getting mines.

If you get to the end of all five circuits you face off on a ridiculously hard moon course. This level is a nightmare. While the difficulty really ramps up after each circuit nothing really prepares you for the final stage. Winning this unlocks several new tracks and cars, but don't expect to breeze through without tossing the GBA a couple of times. There really was no reason for the difficulty of the final level. It was more painful than fun. Finally, multiplayer requires 2 carts. I still hate that... there is simply no reason to require this... The game would be fun 2 player, but based on the number of carts of this game that have sold, finding a second person with it might be a stretch. I personally (sadly) haven't tried this aspect of the game.

The graphics ARE very nice. In fact, graphically this is one of the better GBA titles. The 3/4 angle of view is pretty much perfect for the format. The environments are highly articulated and clear. Each race has its own theme - city, jungle, arctic, lunar, etc. My sole complaint is darkness. Many of the tracks are black and so are mines, so on the original GBA the mines were pretty hard to see. If you have an SP this is NO problem at all, still it was a complaint for me until I got the SP. If you are playing on an SP I consider this game a 10/10 for graphics.

The control is pretty much perfect. The sole problem is the nasty blister you are likely to acquire on your right thumb. The gas probably should be a trigger, rather than a button. Still having the triggers mapped to missile and turbo does have a certain allure. The A button is gas, and the B button is mine. Steering is incredibly crisp (especially after a few tire upgrades) and the drift of the cars around corners is for the most part just right.

The games sounds are cool but a bit over the top, especially the squealing tires. They are just a bit too ramped up and harsh. The missiles and turbo are particularly pleasing. The music is disposable. Overall the sound is of decent quality and while it doesn't distract from the game, it doesn't add a whole lot either.

There are a few other games like this out there so once you finish replay will be limited and you will be likely to move on to something newer. The fact that multiple carts are required for multiplayer augments this. Still, you are able to post your fast times on the web and there is a certain satisfaction to that. Lets just say that the 10-20 hours of gameplay spent going through the single player mode 1 or 2 times will be your high point with the game, but that it could be enjoyable beyond that if you really enjoy the racing experience. The 4 unlockable cars and tracks don't add a lot to the whole time trial/ghost experience but it is more stuff to do.

A quality addition to your collection, this will probably be one of the top 10 racers for the GBA over its system life - At $10 a pop its pretty much a no brainer... way better than expected. Still, if you miss this one its unlikely you'll hate yourself ten years down the road - I don't see cult classic status in its future.
Review Page Hits: 0 today (104 total)
mediahook