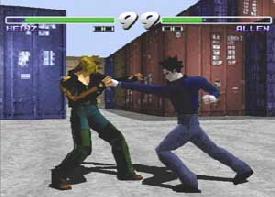 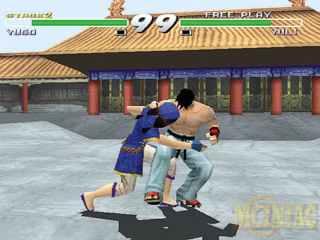 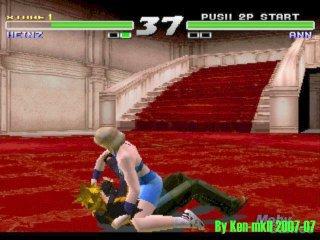 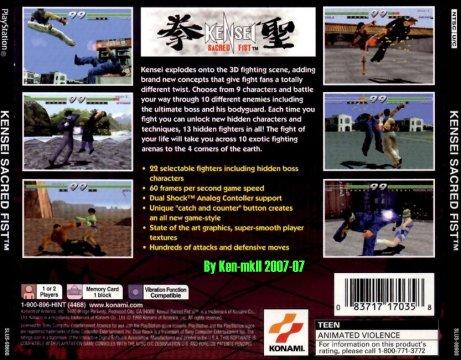 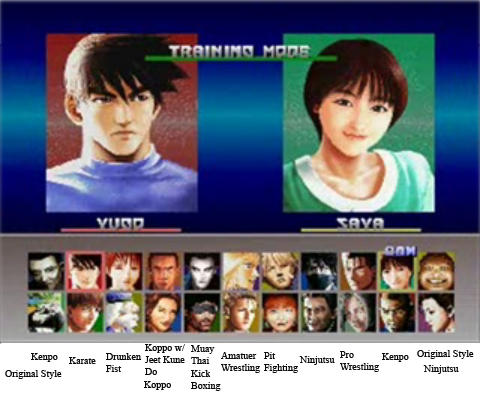 This is a straight up arcade style fighter with 22 martial artists, wrestlers, ground and pounding, spinning kicks, and some juggling combos. When you knock a character down you can block his rising attack and you will step his attack off instead of go down like in most other fighters. There is no story or cut scenes aside from a 10 second game intro movie sequence. There are character profiles though that detail fight style, country of birth and stuff like that.

Kensei Sacred Fist is a 3D fighting game from the PlayStation One (PS1)(PSX) era circa 1998. To put that in a proper time frame, it was during the time Tekken 3 was out and Tekken was the best fighter on the console and had a little bit more polish to it then Kensei. Kensei added a brand new concept called the "catch and counter" technique that made it different but overall never became a popular fight game franchise and a sequel was sadly never made.

In the beginning in traditional arcade mode which in this game is called "Normal" mode you choose from 9 characters and battle your way through 10 different enemies. Each time you defeat the boss fight you unlock a new character. 13 hidden fighters for 22 in all. During the 9th round you fight your rival, the character that you will unlock if you win which is a character with a similar fighting style. Unlimited continues are allowed. To unlock another character you must fight with a different character to unlock his or her rival.

Basically there are 2 characters for each fight style and are a guy and girl version. The styles break down like this:
Kenpo, Koppo, Kick Boxing, Muay Thai, Pit Fighting, Ninjutsu, Karate, Original Style, Drunken Fist, Amateur Wrestling, Professional Wrestling, and one character uses Koppo and Jeet Kune Do; he looks and acts like Steven Seagal, who actually uses a similar style to Koppo which breaks bones but Stevens style is Aikedo. See character select screen image on the side of this review for character and style association. I explain ground and pounders later in this review

Now that makes 12 fight styles and this all sounds good and it is, but there is more to it. There is actually really only about 5 styles that only differ slightly from other characters with the same style, depending on body size..............

Three characters use Kenpo. a small Asian girl, a large Asian man and a medium sized ghostly white guy. As a player you get to choose if you want to fight with the small girl and be quick or the large guy. They use the same move set with a couple exceptions to punch continuations and catch moves. To explain the game mechanics further.

One character uses Muay Thai and his rival uses Kick Boxing, two rival characters use Pit Fighting and one character uses an Original Style-jelly/Billy(not counting Zhou). Sounds all good but just like with Kenpo they are all basically the same moves except with these they are all the same body size so it really becomes which costume and a couple different moves do you like.

Three characters use Ninjutsu, and are two guys and one girl, all the same size and in this fight style have identical moves. So, what the developers did with all the characters and styles was make slight variations on the individual fight styles, gender, and body size.

MOVES & CHARACTER VARIATIONS:
I like what they did in this game. I have played countless fighters and encountered a character with certain moves I didn't like but still liked the character overall. I'm talking about were a natural progression of attacks is missing something, or a character has dead moves. Kensei gives you the opportunity to play the style you like only slightly different per certain characters. There are still 5 styles or 12 to master and this is a good fighter. Slow paced at times and methodical in planning attacks or can be repetitive in executing attacks for the win. On a bad note it is slower then Tekken 3 at times and at times unresponsive.

All depends on your fight style and what character you use. And this is a game that has different styles especially the wrestlers who bring a different method to this fight game all together. Think King from Tekken 3. The wrestlers are ground and pounders who can mount a downed opponent, and also perform wrestling grabs and throws, have a bigger size, but still able to handle the other fight styles. It wouldn't be as good as it is without the wrestlers and Koppo.

It is the depth of characters and moves that make this a good game. You can catch an opponents moves. They call it "catch and counter" and it is refreshing to play with it again 10 years later. Timed just right you have a real tool to fight with. And if you are a button masher, every so often you will pull off a catch and counter and see something new in the fight. You might get lucky and see it once in a 2 round 10 match arcade mode play through.

Character's have unique moves and combinations unlike any other styles. Wrestler, street fighter, martial artist, all play the moves different and attack differently. A few will crawl onto a downed opponent and mount to break an arm and leg, or slam your head into the ground until you or they feel like stopping. and you can reverse a lot and catch most moves and grabs.

Hits land and characters effectively look as if they are blocking attacks, if you sweep kick an opponent as they are blocking, they will step off to the side. I really like this feature and haven't seen it in other games. The hits land, if one character grabs another for a knee strike to the head; you see the head being grabbed, the sway of the head as the player positions him for a knee, the pull in to the knee and the release. All done very well and not seen in a detail like that in other fight games.

You can stomp a downed opponent, reverse them away from you if they attack, a "catch" sort of thing.

This is a 3D fighter you can parry move side to side and use side attacks and side and rear grabs.

OTHER GAME STUFF:
The camera angles move about the rings for optimal effect depending on what moves are being played. The camera doesn't just sit in a single size forward looking view. It will expand and contract with the flow of the fight and with grabs and throws. The camera is actually triggered to show certain views when certain moves occur. In the blink of an eye, a grab move will place the camera with an over the shoulder view. I don't know what it is officially called but all the fighters I have played do this with the camera. A players moves effect how the camera moves and what it shows, a prime example of this taken to the extreme is Street Fighter 4 which induces anime "cut scenes" into the fight.

There are 15 versus fighting arenas which are all available from the start of the game. Three of them have different sound tracks. West Town has a Dethklok metal track.

The graphics are bad by today's standards and Tekken 3 looks better but it doesn't matter. Really the buildings have lights, a dock has crates, walls have wood, floors have carpet, shelves have books and overall blend in with the action and don't interfere but on closer inspection or even passive attention lack completeness. The characters have a detail to them but they to are also missing a certain finishing touch detail. Bu this is old school console gaming and pixels are such, but could of been just even slightly better. I say this cause I played Tekken 3 again and the floor is complete but in Kensei you can see on some levels the floor is moving independent of the walls and objects in the environment, they are not stitched together, and seems like you are on a turn table.

Various game modes, include normal mode, training mode, time attack, versus, survival mode, and a unlockable running game mode where you run on a track. It is dumb and available after unlocking all characters.


OPTIONS:
This game is above average in options still ten years later. The game tracks all character progress throughout each game mode. Longest amount of rounds survived in Survival Mode, most used character, etc...

The training mode of Kensei is packed with options. You can fight a friend or the computer. Choose difficulty settings and layout up to 5 command options to have the computer perform. You can just set the computer stand still or backwards or whatever you want. You can select to turn on or off on-screen data and can select to replay the last few seconds of moves. All you do is select replay to be available and then while playing press the select button and you can watch the last few moves made.

Character Commands are available via the pause menu in any mode and detail in a long listing every move possible. You can scroll down the list or page down 8 moves at a time by pressing right on the d-pad.

David will lay on the ground and kick the shins or knees of an opponent, and can shoot and leg lock-up his opponent and then while clinched up will snap his opponents legs. It's a 4 figure leg lock from a ground shoot. Douglas looks like Steven Seagal and is based on his movie characters with the use of Jeet Kune Do and Koppo. Koppo is a bone breaking technique that Steven Seagal used in many of his films. Steven Seagal actually used Aikido.

There are only 4 buttons used and you can assign them or button map them all to any button. There is vibration function but no analog stick control, only the d-pad.

CONCLUSION
Moves are good from novice to expert players. Button masher to catch and counter-er.

Get this game if you are a hard core fight fan, it has great features; the ground and pounding is excellent and character variations and move sets are what make this a game to spend time with. Still it has some issues like when you jump to avoid a low sweep kick you get hit, even though you are clearly above it up in the air. You have to time moves just right. Overall a great PS1 fight game.