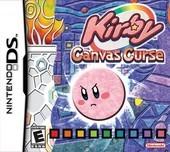 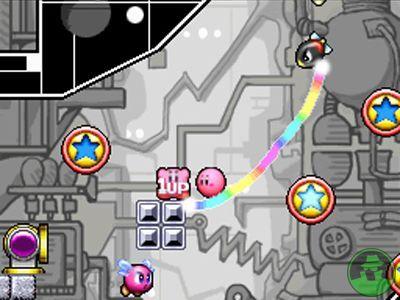 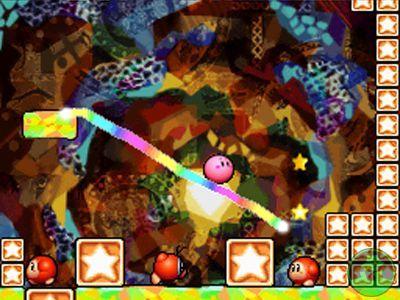 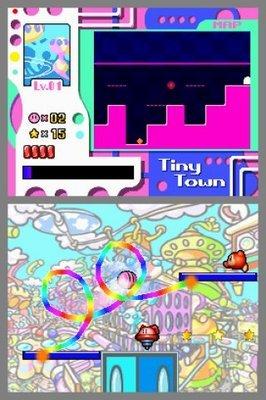 When Nintendo released the DS system, one of the main selling points for its innovation above previous portable gaming systems was the touch screen. Through use of a stylus pen, new forms of console game play could be developed and fresh ideas could be brought to life in ways impossible on other systems. Yoshi Touch and Go was Nintendo's first stab at innovating the side-scrolling genre through touch control, but ultimately only teased gamers with its hollow, one-horse show. Kirby Canvas Curse followed that game, by way of HAL Laboratory, with the intent to demonstrate what that type of game could accomplish. While they did succeed in creating a game that achieved both a new form of console game play coupled with some fresh ideas, repetitive level design and the underutilization of the game's artful direction keep it from being a DS masterpiece. Think of it more as a Thomas Kinkade painting (same thing, different background) instead of a Claude Monet (masterpiece after masterpiece).

Starring Kirby, one of Nintendo's more popular (and fluffy) mascots, Canvas Curse sees our pink hero saving Dreamland from an evil, art-loving witch. Not only has she cast a spell that changed the world into a painting, but she has also cast a spell that changed Kirby into a ball! But she must be new at this evil witch bit, as she also left behind a difference maker for him, a magic paint brush. Obviously a much better plan would have been turning him into a painting or just offing the little bugger...but I guess there would be no game that way, so I'll have to leave her poor judgment be.

With the help of the magic paintbrush, being wielded by the player, Kirby must roll his way through 8 worlds, 3 boss stages and ton of extra levels in his quest to return Dreamland to its non-framed, non-hangable form. Canvas Curse's biggest departure from most Kirby games to come before it is that you have no direct control over Kirby himself. Instead of moving Kirby, using the magic paintbrush (which is represented in the real world as the stylus) you draw paint lines that guide him throughout each level to the goal. Most of your maneuvering of him results in drawing lines for him to follow, like a car on a track. You have free range of where you draw your lines and how long they are on the screen (as long as you have paint in your paint meter), but drawing pictures on the screen will most likely lead to Kirby rolling off a cliff or getting thrashed to death by enemies.

Kirby can gain special powers by running over certain enemies (just like in previous games when he inhaled them), which are activated the same way you make Kirby dash, by tapping him. These range from turning him into a wheel to giving him lazers, but for the most part add very little to the game itself and could have been left out. Special moves like these are staples for a Kirby game, it's a shame to see them so haphazardly implemented.

Musically, this game makes excellent use of the stereo capabilities of the DS. The songs bounce right out of the speakers, proving to be a nice compliment to the colorful levels. None of them are overpowering or increasingly annoying. They melted into the background, which is what a good puzzle game song should do. The sound effects are effective, though most are familiar sounds to Kirby veterans. Nothing special there.

Each world consists of three levels, each with its own unique artistic theme. The backgrounds and levels look awesome on the DS screen. Each is bright and individual, representing many different types of art. It is obvious a lot of care went into bringing these levels to life. It is a shame, however, that the same cannot be said for the characters and enemies within. Outside of Kirby, who has a very fluid, though unspectacular, rolling animation, every other enemy and object set within the level looks ripped straight from the previous Game Boy Advance and Super Nintendo games. Which, not only does this mean that they appear stale and lazily rehashed, this also means that the character designs take nothing from the artistic pizazz that the levels have. Kirby and company could, and should have, changed with the world, adapting different art genres into their character design to give them some fresh feet to stand on. Nintendo and HAL really dropped the ball just importing tried and true character designs into this game. What could have been special is only wasted potential.

While the game play does not fall under the category of wasted potential, it does eventually fall into a rut. Though far deeper engaging than the previously mentioned Yoshi Touch and Go, which really only has one level to speak of, as this game progresses, it falls prey to the same repetitive nature of Yoshi. The first half of the main game is thoroughly engaging and has more than enough variety to keep you interested - especially the innovative fun boss battles. Each boss battle has its own twist. One has you playing a Kirby-themed Breakout, another is a food-powered race and the last one is a connect-the-dots battle.

But, after those are finished and the second half begins, sans a new set of boss battles, the game loses steam, as each new level begins to feel like the same thing, different background. Guiding Kirby away from spiked floors and ceilings, over and over again, had me wanting to just turn the game off. And a few times I did, only playing a level or so before being bored out of my mind. I saw the game through till the end, but it became an unnecessary chore to do so.

Thankfully, Canvas Curse is saved by a robust set of extras, including three extra modes that you unlock by meeting certain very simple requirements, many of which are bought using medals which can be found throughout the levels of the main game. These modes include a boss mode, where you can replay all three boss stages, and Rainbow Run, which includes both a time trial and a paint trial mode (where you try to finish a level using as little paint as possible) for each of the levels in the main game. What seems like a short game is nearly tripled after adding all these in and brings the play time to around 15 to 20 hours for 100% completion.

For whatever the reason, this game stands as a solo affair. Adding something to be played two player could have really lengthened the stay of this game. At the very least, time trial races could have been a blast, especially with the ability to draw quick lines to halt or misdirect your opponent. But, alas.

Despite my eventual boredom with this game, as a game played in spurts, it can be quite entertaining. Levels are fairly short and progress is saved after every one, making this a perfect game for that short bus ride or lunch break. But sitting down with it for a couple hours will eventually lead to boredom, as the repetition slowly numbs your brain. With better character and level designs, this game could have been a contender for best DS game out there, but instead glides nonchalantly across the finish line in a distant second place.
Review Page Hits: 0 today (133 total)
mediahook