Kick some bot with Kirby 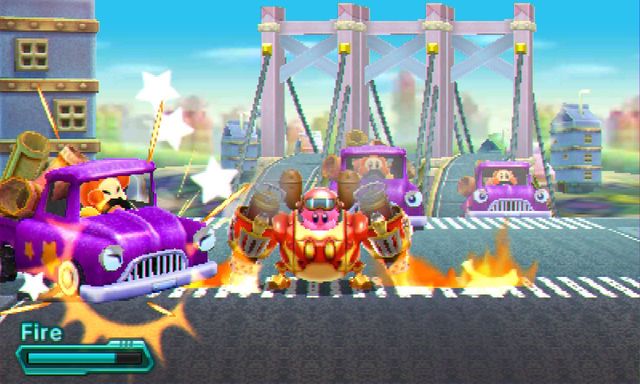 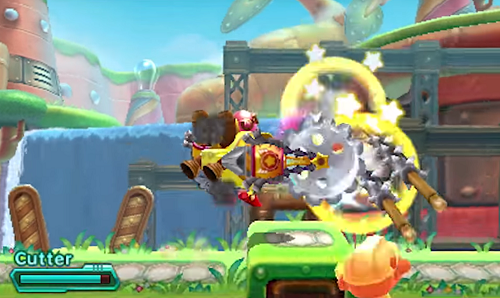 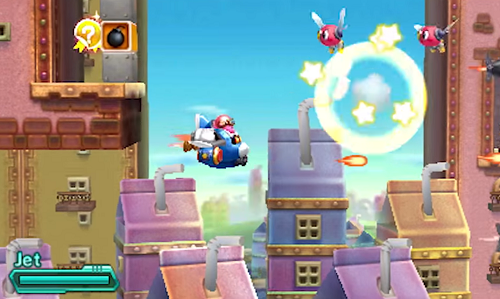 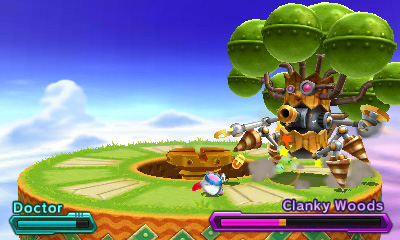 Just a little over two years ago, Kirby arrived on the Nintendo 3DS with his first platforming adventure on the system, Kirby: Triple Deluxe. That game brought the typical Kirby action the series is known for, while adding in gameplay that had Kirby switching between the foreground and background of levels to great and impressive effect. Now, it's 2016, and with the Nintendo 3DS sort of wrapping things up, Kirby is back with a new platforming title, Kirby: Planet Robobot. Late to the 3DS party, but fashionably so, Planet Robobot certainly kicks bot.

The Haltmann Works Company arrives from space with a giant robot spaceship, and uses its mechanical power to infuse itself with Kirby's home planet. In doing so, the pure spaces of Dream Land become mixed with mechanized gears and other unnatural features. Kirby sets out to restore the natural beauty of his home world through doing what he knows best, platforming and inhaling foes to copy their abilities to save the day!

Kirby: Planet Robobot is very much structured and designed like its 3DS predecessor, Triple Deluxe. Each level has a certain amount of hidden collectibles, this time called Code Cubes, that when enough have been gathered in a world, unlocks the door to the boss. In addition to Code Cubes to collect, Kirby can gather stickers that serve as the key chains of Planet Robobot. Not only are these based off of past Kirby characters like Triple Deluxe's key chains were, but this time around they can be used to plaster on the arms of Kirby's mech that he uses in certain levels in-game.

Yes, the Kirby mech is the new gameplay enhancement in Planet Robobot, and it feels like a much better extension to the gameplay than Kirby: Triple Deluxe's decidedly throwaway Hypernova ability. It's used better, and it's much more fun to use. Like being an extension to the gameplay of Planet Robobot, Kirby's mech is an extension of the pink puffball's abilities, allowing him to scan and copy the abilities of a given enemy. It absolutely sent me laughing into stitches seeing Kirby's old school abilities get an upgrade by using them with the mech.

With Kirby's mech, you can grab giant blocks, putting them down to create a makeshift stepping stone to reach higher platforms. You can latch onto screws and loosen or tighten them to lower or raise specific platforms. Stage hazards like oncoming Waddle Dee-driven cars that move from the background into the foreground (a mechanic that greatly shows off the 3D effect of Planet Robobot) that would crash into ordinary Kirby, sending him flying face-first into the screen, can now be defeated easily with Kirby's mech with a well-placed punch.

There are also certain sections of specific levels that have Kirby's mech scanning and copying the Jet and Wheel abilities, turning the mech into a flying spaceship in special shoot-em-up sections and turning the mech into a speeding vehicle for road sections of level respectively. These point is that all of these mechanics change up the gameplay quite nicely and are fantastic additions to the traditional Kirby formula.

Even in the sections without Kirby piloting a mech, gameplay in Kirby: Planet Robobot is packed with variety and fun. Of course, the basic Kirby gameplay is present and accounted for here in Planet Robobot. Kirby can inhale and swallow certain enemies in order to copy their abilities. There are the mainstay abilities of the Kirby games, such as Sword, Fire, Cutter, Ice, Hammer, and more, but there are also new ones such as Mirror, Poison, and Doctor. Each ability has its own set of moves to it that allow Kirby to perform different actions when the time and opportunity call for them. You can press the pause button when equipped with a given copy ability to quickly scope out the simple button inputs to know what each action does.

Completing the standard story mode as Kirby will last most players somewhere between 5-6 hours, but then there's finding all of the Code Cubes, which if all of them have been collected before a boss in a given world, they open up an extra level in that world. There are also rare stickers to find, one in each level.

After beating the story mode, in true blue (or I guess true pink in this case) Kirby fashion, new bonus modes open up, such as being able to play through the game as Meta Knight. He doesn't have the copy abilities of Kirby, but he does have a powerful sword to slash and smash through foes and obstacles. There's less health in this mode, but by collecting and storing enough energy, he can use a variety of moves, some that take off half the health of powerful enemies, while another can partially heal Meta Knight.

There are two side modes in Kirby: Planet Robobot, and these themselves could be stretched out more to be their own games! The first is Kirby 3D Rumble, which you can infer based on its name, is a 3D romp where the goal is to defeat all enemies in a 3D environment while racking up points with combos and multipliers. The other is Team Kirby Clash, where you can choose between four roles: powerful but slow attacker with the Hammer, fast and nimble attacker with the Sword, healer, or magic user with the Beam. You then fight a boss character, whittling their HP down until they are defeated. This mode allows you to play with up to three friends locally or three AI-controlled Kirbys.

Planet Robobot remains as a colorful and charming as you'd expect from a Kirby game. The 3D models and environments are quite endearing to look at, full of vibrancy and things to engage the eyes with. The impressive mix of a nature and machinery in the levels makes for one of the most interesting batch of level visuals in the Kirby series' long history. It's helped because everything runs at a relatively smooth frame-rate as well, which is great. Meanwhile, the music featured supplies listeners with catchy and jaunty themes, some returning from past Kirby games and games featuring the pink puffball.

Overall, Kirby: Planet Robobot is a seriously wonderful entry in the Kirby series, and one of my favorite titles in the franchise yet. Its platforming and level design is absolutely sensational, packed with lots of secrets to scope out. The added (and more challenging) bonus modes bring even more longevity to the game, meaning despite the story's 5-6 hour runtime and its generally low difficulty, you'll be engaged in Planet Robobot for many more hours to come. Kirby doesn't just kick bot with this game. He definitely kicks butt, too.
Review Page Hits: 0 today (204 total)
mediahook