The best Kart racer on the Game Boy Advance, hands down. And yes, that means it's better than Mario Kart: Super Circuit. 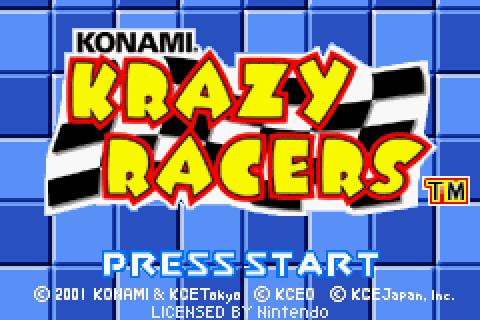 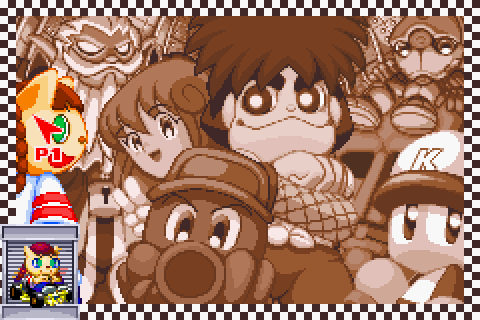 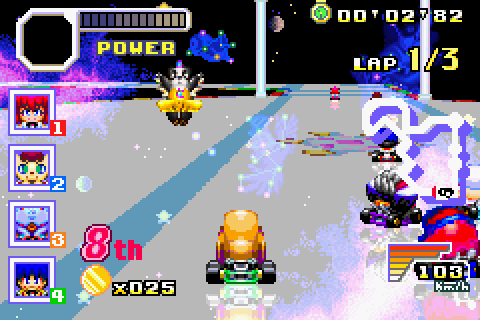 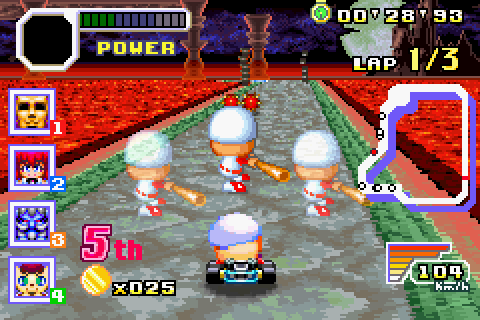 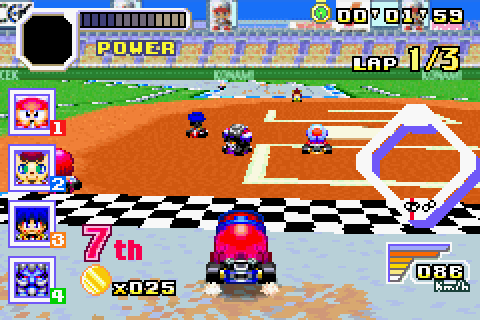 Let's face it - Super Mario Kart was the game that pretty much made the kart racer genre. Since then, there have been countless me-toos and clones. Some were good (people give high praise to the Crash Bandicoot racing games), some were passable (Pac-Man World Rally isn't bad), and some were downright awful (Cartoon Network Racing, anyone?), but the Mario Kart games always managed to remain king of the ring, maintaining the highest level of quality among their counterparts.

Granted, it's only my opinion, but I firmly believe Mario Kart: Super Circuit to be the weakest entry in the Mario Kart series, and because of that, Konami was able to pull off what no one else has done since. They beat Nintendo at their own game, as it were, and surpassed the quality of Mario Kart with their release of Konami Krazy Racers.

Much like Nintendo, Konami understood what fans want in a kart racer: They want:

1 - Characters they recognize,
2 - Well-designed tracks based on those characters' various games,
3 - Some of the memorable music from said games,
4 - Great controls that are easy to get used to, and
5 - A great selection of useful powerups, both weak and strong

Konami has lots of recognizable characters (though more so in Japan than in the US), and included in Krazy Racers are such venerable faces as Goemon (from Mystical Ninja), Dracula (from Castlevania), Nyami (from Pop'n Music), and many more. It's interesting that some of Konami's best known characters are omitted from the lineup - Solid Snake, for example, is nowhere to be found, although the cybernetic Ninja makes an appearance. Also lacking is any presence from the Contra series, Dance Dance Revolution, Suikoden, Policenauts/Snatcher, or Silent Hill (though Pyramid Head and Robbie Rabbit both make an appearance in the 2009 iPhone version of the game)

It's also a bit of a shame that there are only 16 tracks in the game, which seems pretty paltry when compared to Mario Kart: Super Circuit's grand total of 40 tracks. To be fair, though, half the tracks in Super Circuit are re-hashes of older tracks, but it's still a pretty impressive number. Despite the smaller number, though, the tracks are quite well designed, and offer a fairly large variety of environments, hazards, and turns. And of course, each of the tracks features music from the game it represents.

The controls are fairly simple - you've got your accelerate and brake buttons as A and B, the R trigger will let you do a hop (which helps you to make sharper corners without slowing down), and the L trigger will fire off an item if you have one available. I found the controls in Mario Kart: Super Circuit to be far too loose, and Krazy Racers seems to get the balance of it much better.

As for the powerups, they're largely taken from Mario Kart, but there are some differences:

Blue Missiles are the equivalent of Green Shells, but they always come in packs of 3 and fire rapidly in front of you. They don't bounce off walls, it's just a straight shot and done.
Red Missiles are the equivalent of Red Shells - they go out and seek the nearest enemy to whop them one.
Bombs perform pretty much an identical function to the Bob-ombs in Mario Kart - drop them behind you or throw them in front of you to try and catch an opponent off guard.
Barriers will speed you up and make you invulnerable for a short while, pretty much identical to the Super Star in the Mario games.
Batteries give everyone else on the track a jolt of lightning, but they don't shrink everyone like the lightning in Mario Kart, but...
Piggies do that. They turn every other racer into a cute li'l piggy which moves slowly and is easy to knock about if you run into them.
Eye Potions cause you to become invisible, but they don't steal an opponent's item like the Mario Kart ghost Boo will do.

There's also an ice attack, a mole (to dig a hole), and a special item unique to each character (Dracula gets the Grim Reaper, for example). The specials all have the same basic effect (speed boost for a short while, then fire a homing shot at the nearest enemy), but they're fun to see when you get one. Best of all, there are no blue shells (which so often end up being race-stealers in the Mario Kart games).

Oh, and instead of running over question blocks or item boxes, you run into bells from the Twinbee games to collect your items.

One of the things that sets it apart from Mario Kart is that the coins you can collect on each track can be used to buy additional item quantities, so that any time you get that item on the track, you'll have up to two extra uses of it. Of course, the better items cost more coins, and there are a finite number of coins scattered throughout the tracks, so you have to choose carefully which items you want to have extras of (Red missiles are usually a good pick, though).

Also diverging somewhat from the Mario Kart standard, you don't simply unlock the next cup by completing the previous one - you have to pass a license test, which consists of completing time attacks and races outside the Grand Prix. It works pretty well, but the final test is frustratingly difficult. The final test is really just for bragging rights, as it doesn't unlock anything. Whether that's good or bad is up to you.

It's truly a shame that this game never had a sequel (and the slightly altered iPhone re-release doesn't count), as it could have provide some much needed competition to Nintendo's Mario Kart series. Much like with anything else, good competition tends to make for higher quality products on both sides.

Having to compete with Mario Kart certainly put Konami on their A game, and it really shows in Konami Krazy Racers. I highly recommend it for anyone wanting a portable kart racing fix.
Review Page Hits: 0 today (379 total)
mediahook