The Best Gaming Experience of All Time 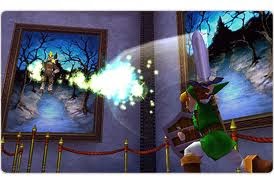 It's strange that I never played much of Ocarina of Time when it debuted on the Nintendo 64. One of my friends had it, and I thought it was amazing during the first couple of dungeons I played, but in my teen years I had other interests and I didn't devote extended periods of time to gaming (that came in my 20s). I usually believe that experiencing the legendary titles of gaming is best when those same games are new. I've played several games over the years that might have missed a little bit of that nostalgic tint that can affect some of our views on those games. They may still be good games, but just aren't the masterpiece we once thought they were. The Legend of Zelda: Ocarina of Time 3D is not one of those games.

I know it's an upgraded version visually, but the heart of a video game is in the game play, and the heart of a thoroughbred runs through Link's classic adventure. Ocarina is a timeless example of great story, great characters, incredible level design and a very high level of polish. It was a system seller, convincing me to purchase a 3DS XL and completely reinvigorated my interest in Nintendo again.

Ocarina begins with a charming scene in which Navi, your fairy guide, is summoned by the Great Deku Tree and tasked with helping young Link in the face of an approaching darkness. From her perspective, we rush through Kokiri Forest, zipping past a few villagers, butting our heads on a fence and finally arriving to rouse a young Link from his troubled dreams. We then set off to see the Great Deku Tree. Here we encounter the first of an amazing group of dungeons, slowly learning the nuances of the game and overcoming some well crafted puzzle elements. As Link continues his journey, he discovers a magical ocarina, a musical instrument that allows link to teleport around the world map, manipulate time and weather, and solve a multitude of puzzles and challenges. As you progress through the game, you will learn new songs that have a nice variety of effects and none of them ever feel useless.

The graphics are nicely done, with all the classic designs in place. The character are both charming and inviting with the usual Nintendo appeal. The use of lighting and color in each area breathes life into the world. Hyrule Castle and the Temple of Time are stunning, and the town square is vibrant and feels alive.The dungeons are filled with creepy Stalfos, reptilian Lizalfos and heavily armed and armored Iron Knuckles.The 3D effect is of a very high quality and works exceptionally well. The only time it suffers is when I would get excited and press the buttons too hard, shaking the handheld and confusing my eyes. For some battles I had to turn the effect off. While not necessary, the 3D adds to the immersion.

The score is simply stunning. Each piece sells the uniqueness of each area. From the organic, whimsical tunes played on the Ocarina of Time, to the sweeping, epic set during the final battle, Ocarina achieves a musical masterpiece that rarely graces even the largest AAA releases. The subtle tones used during the Great Deku Tree's final moments are touching. The higher tempo theme in the Gerudo Desert had me excited and feeling like Link was closing in on the evil Ganon. Foreboding notes painted the dark presence of the Shadow Temple, while the magic of the Lost Woods was addressed with a lively, but eerie quality.

Combat is very simple and effective. Link can focus on a target by holding down the L button. You can then roll, parry or jump to put you in position to deliver sword strikes to your enemies. Aiming your hookshot or fairy bow makes use of the 3DS motion sensors to allow you to aim "through" the 3DS by literally aiming the console like a gun and lining up your shots. This is incredibly intuitive and it's nice to be able to snap to targets so quickly. As usual, Link has a wide variety of items to help him. You'll make a lot of use of you bow, hookshot, bottles and other goodies.

The bosses are all well designed and are typically huge. My favorite boss was the Phantom Ganon in the Forest Temple. In the boss room is a platform and several paintings. Multiple Phantom Ganons appear in the paintings, steadily drawing closer on horseback until he jumps out of the frame. You have to shoot him three times to get him to dismount. Next, you have to swing your sword at his magic blasts and knock them back at him. It turns into a game of magic ping pong as Link and Phantom Ganon bounce the blasts back and forth. Eventually he will miss and be vulnerable to sword attacks. Each boss is about learning what their weakness is, which is usually what item you picked up in the same dungeon, but each one is distinct from all of the other fights.

As par the course for The Legend of Zelda series, Ocarina manages to grab a hold of you and take you on a wonderful journey in a land of fantasy and adventure. The simple, yet deep game play is second to none and has more than held up since the original release in 1998. This is easily the best game experience I have had not just in the last generation, but in any generation of video games.
Review Page Hits: 0 today (805 total)
mediahook