While Little Big Planet offers endless possibilities, it is still lacking and leaves you wishing the developer had thought things through a bit deeper. 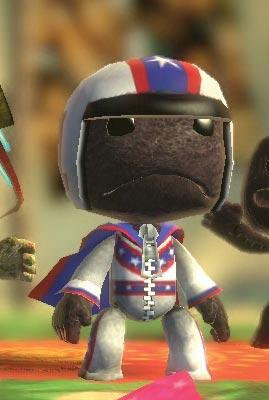 Little Big Planet is a fun game, bar none. However, the game does have its flaws, problems and glitches.

The Good - LBP allows users to create from a seemingly endless array of possibilities. The multiplayer can be quite entertaining, and there's something very satisfying about collecting new items to create new characters and build levels, amongst other things. The game looks wonderful, and just makes you smile the second you pop it in the console. From racing sleds, to grabbing sponges, to jumping cliffs, to slapping other players in the face, you really feel like anything is possible in the world of LBP.

The Bad - While the multiplayer is really the game's strong point, it can also be a frustrating mess. The camera shifts and focuses on one player at time, leaving others behind in precarious situations with no way out. When a player re-spawns, the camera shifts directly to it, causing the living player to lose sight and focus, usually killing him/her in the process.

The controls feel rather unnatural, and you find yourself having to adjust to the odd mechanics of sackperson movement. There are many areas in which you will have to execute very precise jumps, which can pose a problem, seeing as your jumping is never very accurate. This, again, leads to much frustration.

The music sounds charming for the first few rounds of story mode, until it begins to get under your skin. Some of the songs used in story mode just repeat on and on and on, seemingly forever. Some of these songs are incredibly annoying and only help to push the level of frustration as you attempt another precise jump just to fall in a ditch.

There are a few known glitches in the game. The infamous "wheel of death" glitch is something that happens when your sackperson attempts to grab a wheel moving at the highest possible speed. It kills your sackperson, not allowing you to respawn. Even if you shut your PS3 down and restart, you'll never come back; losing all of your save data in the process.
The game also occasionally likes to freeze up when attempting to join an online game.

One of the greatest parts of LBP is collecting items for use. If you enjoy playing online levels (which are the bulk and heart of the game), you'll find yourself collecting bunches and bunches of player made objects, stickers, etcetera. That's great. The problem is that Media Molecule didn't allow enough profile space to keep everything you find, so you'll occasionally find yourself having to delete objects you want to keep over and over and over, just to prevent the game from automatically deleting items for you. This was incredibly disheartening, time consuming, frustrating, and every other word synonymous with frustration.

All of these (sometimes large) problems aside, LBP is a great experience. It's fun, innovative, as creative as anyone that plays the game, and seemingly endless. I heard someone actually made a shoot-em up level based on Gradius. I've played Silent Hill, Mario, and Sonic inspired levels. All very satisfying and enjoyable.

Bottom Line: If you're looking for a good time with friends and enjoy endless platforming possibilities, this title is for you. If you have the patience and time to deal with the frustrating level editor, this game is for you. If you were the kid that broke six NES controllers attempting to get past level 3 in Battletoads, you might want to steer clear of this one.

I give it a B overall despite it's flaws. It really is a bit disappointing, seeing as this game has the potential to be an A with only a few quick fix downloadable updates from Media Molecule.
Review Page Hits: 1 today (435 total)
mediahook