The most ergonomic gaming input device ever created. 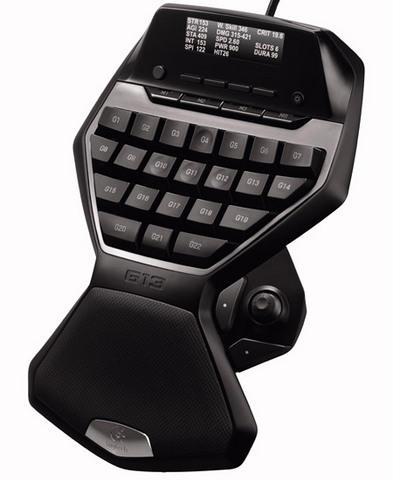 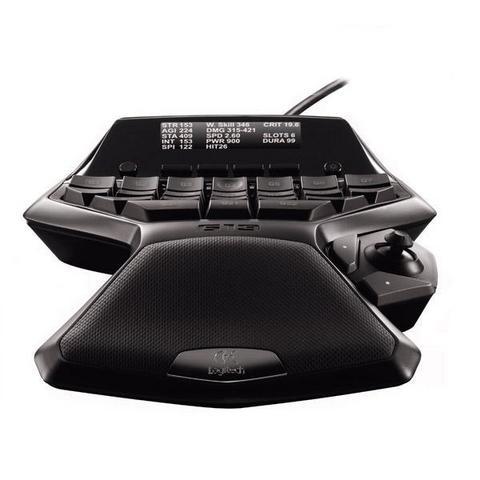 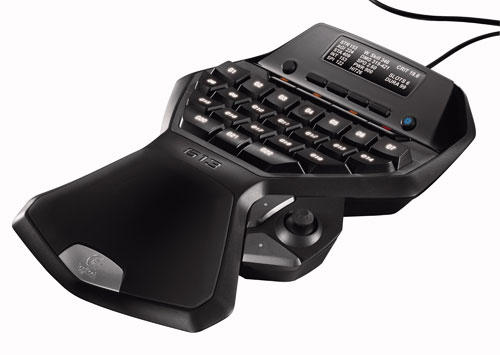 Logitech's G13 gamepad is a rather new addition to the 'G' lineup and gaming peripherals aimed at dominating the market of high-end input devices. It perfects upon older Nostromo Speedpad and Saitek Command Unit by adding perfect contours, a plethora of keys, an analog stick, and even a screen. Every aspect of the G13's design was obviously honed down to the finest of points before the product's release.

The pad is dominated by a large 22-key keypad in the center, with 3 selectable profiles, giving you over 60 programmable buttons. The keys cover the entire area your fingers would ever want to reach, and are sized appropriately based on their positions. They follow a shallow inward curve on a grid, opposite an arched wrist wrest. Rest your hand on the G13 and you will immediately feel at home. No input device has ever felt so comfortable. The wrist rest provides firm support, rather than absorbing your hand, and the "arrow keys" are indented so your fingers will always know where they are on the pad. It's hard to believe but the analog stick is actually quite usable, and rests perfectly naturally under your thumb, without restricting your thumb's access to the right side of the keypad. They keys are on a firm membrane which provides almost no tactile feedback. This aspect comes down to personal preference. It doesn't feel mushy, which is good, but it's far from clicky.

The joystick is a rather confusing part of the device. It is treated as four separate keys, with no immediately apparent way to make any actual analog use out of it. As far as I can tell, there is no way within the Logitech software to treat the joystick as a mouse, as the design would easily mislead you to believe. It's a well-positioned set of four 'keys' but doesn't hold much use as a joystick. Like modern console joysticks, it clicks, but it feels very awkward and isn't tactile enough. It's easy to forget that the joystick clicks. The 2 buttons near the joystick are similarly awkward and have much too much give before they click, however they are still usable.

All the keys, including the joystick, on the G13 have to be programmed using the easy-to-use programming software. The default layout makes the board similar to the top left of the keyboard, which is usually adequate, and there are tons of ready-made profiles for various games. Every key can be assigned a keypress or a macro to automate repetitive tasks. While previous gamepads were usually designed with the FPS in mind (or included fewer keys), the G13 targets the MMO market. Macros can be recorded and used on the fly with the "Macro Record" button, which is very simple to use. The only issue is that on-the-fly macros can't use time delays. Time delays have to be set with the macro editor using the Logitech software. This is somewhat annoying, and reduces the functionality of on-the-fly macros, but doesn't affect anything once you're all set up.

The screen on the device is nearly useless. It uses the same GamePanel as Logitech's G15, which displays various game information or even things such as RSS feeds, system resource usage, and a stopwatch. It feels like a gimmicky add-on, and I don't see why anyone would look at it in game or out of game. The backlight of the device can be changed to hundreds of different colors, so at the very least the screen will glow your favorite color.

The G13 is not without flaws. It's aimed at right-handed players, it has a screen of dubious usefulness, and the analog stick could function a bit better. That said, it performs absolutely incredibly for what it is. Using it is much better than a standard WASD setup, and serious PC gamers should find it wholly worth the price of admission for a peripheral they will likely not need to upgrade again for some time. Logitech is making a bold move setting the standard for the gameboard market. It's more than twice the price of some Nostromo products, and although exercises obvious superiority over the market, might not break into it due to the price and current economy. The G13 deserves to be to the left of your keyboard. It is the highest quality, more ergonomic, most user-definable keyboard-based gaming input device I've ever used and is wholly worth the high price tag.
Review Page Hits: 0 today (431 total)
mediahook