One of the best mascot racers ever. 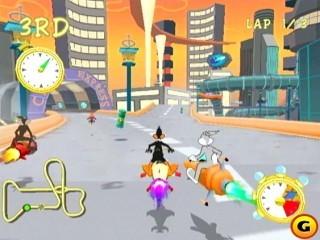 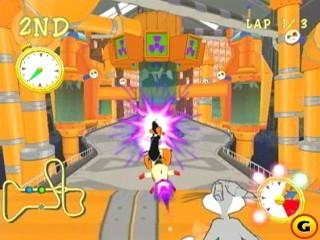 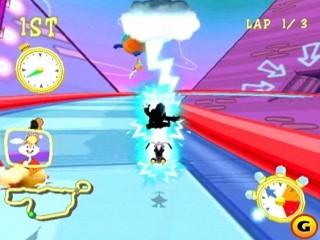 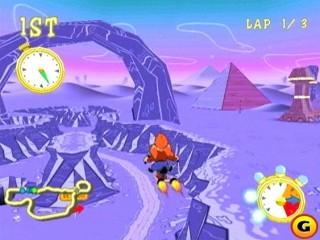 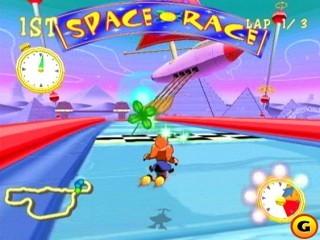 There are many mascot racers out there, so to find a fresh game is very appealing. Loony Toons: Space Race is that fresh game. The background story: the Acme Corporation is sponsoring a race to see who can take the number one spot. The grand prize is a lifetime supply of Acme products. Players fly on character specific hovercraft-style machines while using various Acme products to slow your opponents.

Graphics
The graphics of Space Race are very appropriate. Space Race uses the cel-shaded approach that was pioneered on the Dreamcast. It makes everything look exactly like a Loony Toons cartoon and pulls you into the game with that appeal. At times, the framerate gets a bit choppy but that's the only downside to the graphics.

Sound
The music, well...there isn't much. But every character talks and says their signature lines during play. Aside from each character's own voice is the sound effects of the Acme products. Each effect sounds like it's coming directly from the cartoon, which it most likely is.

Gameplay
Players choose from eight (plus some hidden) classic Loony Toons characters to race around 12 different tracks. Each track has jumps, traps, and even shortcuts. Aside from the single player tournament mode which utilizes a point system, there is also multiplayer where up to four players can race each other around the track at once.

Replay
Aside from going back to play the multiplayer, players can also unlock additional items, 3D artwork, and characters. This will have you coming back to the game. However, once you unlock everything, there isn't much else to do but play multiplayer.