Great gameplay, yet nothing out of the ordinary. They actually TOOK OUT features for the 360 version. 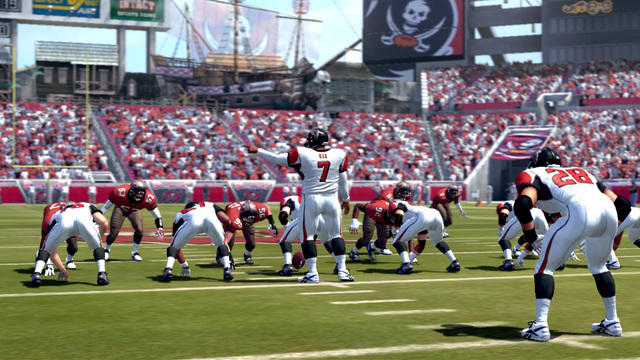 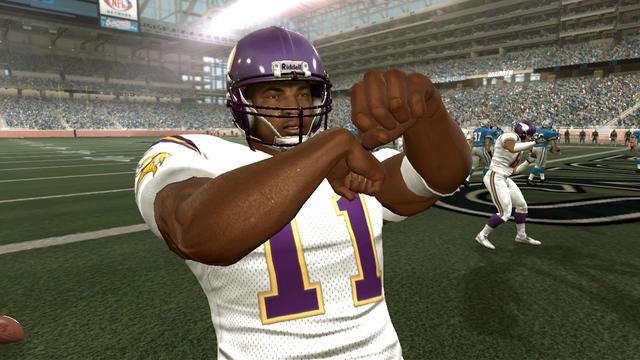 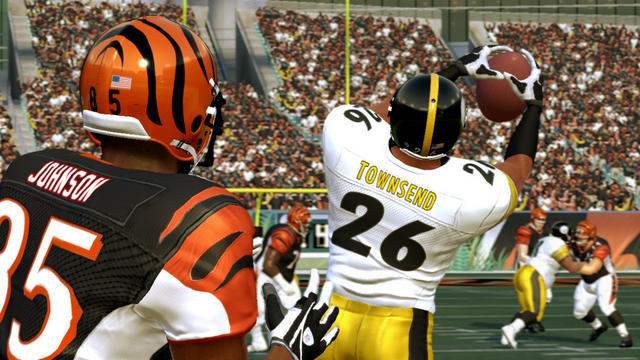 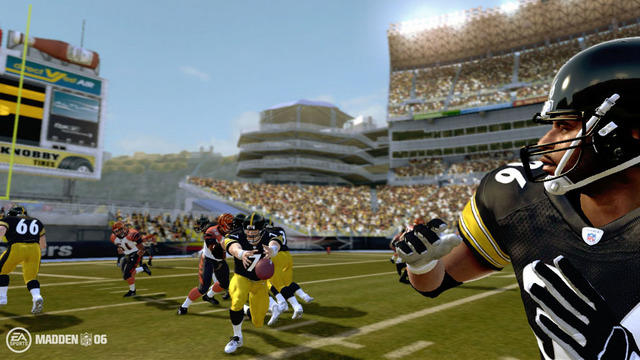 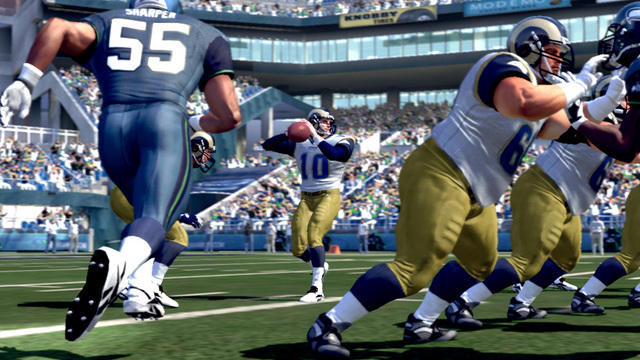 The Madden franchise has been a great NFL franchise that has been consistent throughout the years and always delivered a great game and it does have its own unique license from the NFL itself. The same is true with Madden 2006. The graphics are AMAZING as you would expect for a new system. It looks much better than its counterparts on the PS2 and Xbox. You can actually see the mesh on the players' jerseys and the muscle definition is so real that it's almost disgusting at times. You can see the sweat dripping down someone's face when you look at them on a play or on a replay it's even easier to see. The crowd will react to certain things that it likes and each crowd member looks like a unique person instead of a part of a blob of colors like most older football games. Even the grass looks amazing as you can see each individual blade of grass. Although the weather does look a bit weird, the rain seems to me to be annoying slightly transparent white dashes that will just go across your screen and make it harder to see. Each team has a unique stadium that is very much like the real one, and some even have cool unique things to them, like how the Tampa Bay Buccaneers have a pirate ship in the background on their field.

The gameplay remains constant like in the other Madden games, as the plays can be unique to each team or each coach, or you can create your own playbooks. The books are organized by type of play, like dime, 4-3, shotgun, etc. You can also ask the coach or use the "Ask Madden" feature, each of which have different playing preferences, and you can ask each one depending on the situation at hand to get the best results. The mechanics aren't anything out of the ordinary; just look at any other football game and it's just like that. It has the standard exhibition matches and a dynasty that you can run all the way up to the Super Bowl and Pro Bowl.

There's some cool new interfaces as well. The way that injuries are reported and things will flash up across the score board and the way the refs run out is all kind of cool, but nothing special. There is also a new "vision mode" that will show you where the quarterback is currently looking and able to throw to. A slight twitch of the thumb stick will affect where he throws and makes the passing game harder. This is made up for by making a much more comfortable running game that makes it feel much smoother to take off with the quarterback down the sidelines. You run the risk of him dropping the ball or getting injured which is more likely to happen with the quarterback.

They left out a lot of features on the 360 version, which is the ultimate downfall of the game. They left out superstar mode that is on the PS2 and Xbox versions, and there are no Madden challenges, training modes, or classic modes that you can do to unlock anything. The only options are Dynasty and Exhibition, which are fun on occasion but, if you like to play football games a lot, it will get boring fast. The online mode is fun and simplistic, offering little more than just a multiplayer game in the comfort of your own home.

The sound is amazing. The commentators all cue in at perfect times and the soundtrack contains rock bands like Bullet For My Valentine. This game tried to go back to a lot of traditional "pump up" rock that gets your heart beating for the game unlike other football games that are buried in layers of rap music. Some of the songs feel out of place, though for a football game. EA needs to understand that, even if it's a good song, it needs to fit the environment to make the player feel like they are really there.

Overall, if you're a casual football fan and you want a next-gen football game, then go ahead and buy it. If graphics aren't a big deal and you enjoy making use of game plays options, then go ahead and save your money and wait for next year's release. It only offers a few features and will lose your interest fast. It has the graphics and gameplay, but lacks content to push it over the edge.
Review Page Hits: 0 today (76 total)
mediahook