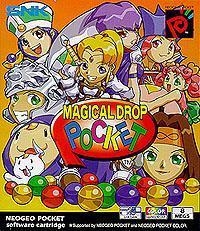 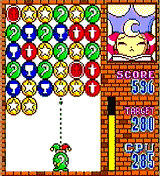 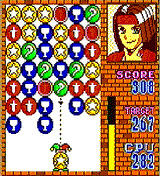 If it's one thing the Neo Geo Pocket Color has plenty of its fighting games and puzzle games. Magical Drop Pocket is one of those puzzle games in the long running series that has only ever seen U.S. releases in Neo Geo form.

Gameplay & Control
The object of Magical Drop is to make the drops disappear by having 3 or more drops touch each other. If some drops are already touching you must pick them up using the A button and drop them on the same color drops with the B button. The more you connect the more points you get, and the more that drop in succession create chain combos for you. The combos are rather difficult to create and often are left to luck when the screen pushes down ala Bust-A-Move. Once the bar on the right margin is full, you've completed that level. Aside from a puzzle games standard unlimited mode (known as Self Challenge in Magical Drop) there is the story mode. You choose one of eight characters to advance through the story with. The downside to this is that it's basically the same story with a few changes for each character. Also, the story doesn't matter anyway so you can skip right through it.

Graphics & Sound
The graphics for the stages are rather bland. The drops are one of plain color and the background is white. The jester at the bottom and the character you control when playing a puzzle have stiff motions but your character's little dance when you aren't moving him is kind of cool to see. The facial animations of the characters in the upper right corner are nice to see when you play to see their reaction to a move you just made but most of the time you're too concentrated on the game to pay much attention to them. In the still screen cut scenes though, the background and the characters are nicely colored and have a good presentation. Overall, the gripes with graphics are mainly restricted to the actual puzzles. However, that is the core of the game so they could be better. Sound is simple and the main theme can be catchy but it's your standard puzzle music and little blips.

Replay Value
There is a two player Friend Challenge where you can link two NGPCs together. Aside from that there isn't any other reason to go back through the story mode because there is nothing to unlock. The game is fun to pick up and play if you have a little time to kill but overall there isn't much more to do.

Magical Drop Pocket is just another run-of-the-mill puzzle game for the Neo Geo Pocket Color. It's fun and is good to kill a little time with, but overall it won't keep your interest very long because the basic formula and strategy of the game is minimal. There are better puzzle games for the NGPC.
Review Page Hits: 2 today (514 total)
mediahook