Save your girlfriend & the world all in one night. LucasArts debuts on Nintendo 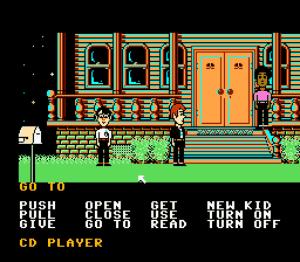 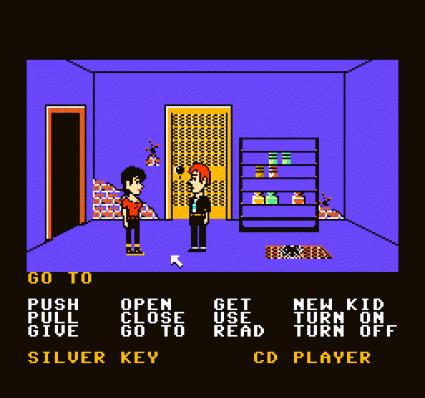 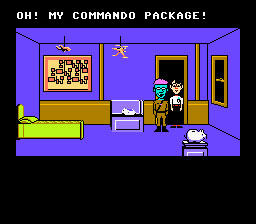 When this game debuted on the Nintendo, there was nothing else like it. The Nintendo audience was mainly unaware that the game was a port from the PC Generation of Adventure games--and those adventurous enough to tackle the new genre were generously rewarded.
Out of a pool of kids, the player selects 3 and begins the search for Dave's girlfriend, Sandy. She was kidnapped by the evil Dr. Fred who wishes to experiment on her brains for the benefit of his twisted science. The kids start out with a minor conversation about this in the driveway and continue into the mansion.

Now, the player only gets to select three kids in the very beginning of the game, and this will ultimately act as the most important decision made throughout the entirety of Maniac Mansion. There is Michael; the swift, cool photographer--or Bernard; the quirky genius nerd--or Syd; the rockstar with an attitude. All of these kids have special niche skills which allow them to perform certain tasks throughout the game. Ultimately, your group determines the difficulty.

I'm not going to get into technical specifics and give you history lessons based on the system--the game was innovative enough. I'm going to get into the gameplay. Being one of the first adventure games, the present gaming audience situated on their Nintendos really didn't respond well to the port. They wanted to run and jump like Mario, not point and click like the cast of Maniac Mansion. If they were patient enough to get accustomed to the controls, they would find that this game had a story that was unparalleled to its Nintendo companions.

The player explores room after room within the Mansion, uncovering items, solving puzzles, interacting with the other characters within the Mansion, while simultaneously witnessing exchanges between the tenants of the Mansion which provides them clues to progressing throughout the game. Picking up everything in sight is highly recommended, as is examining every object repetitively.

Dr. Fred is not the only one to watch out for within the Mansion as it holds refuge to his wife, his son, and two tentacles (Green & Purple), which interact with the heroic kids. In some instances (and with the right combinations) they can help you, other times things don't really go so well. The game has no set pattern, which gives it tremendous replay value--as long as the player has a relative amount of patience.

Maniac Mansion is a gem on the NES. It was revolutionary on the PC, but for Nintendo enthusiasts it is the perfect variance to a string of platforming titles. Now go play it, save your girlfriend, and save the world (or destroy it).
Review Page Hits: 2 today (833 total)
mediahook