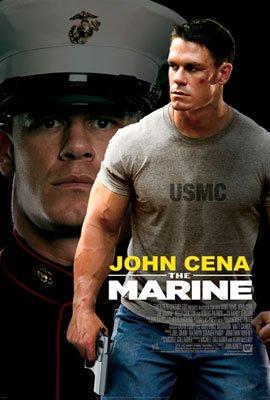 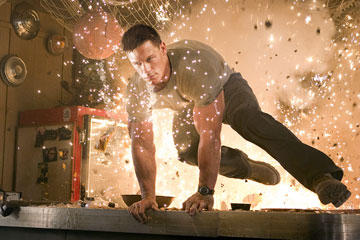 "The Marine" isn't too hard to get. It's basically one big shooter/action kind of film with some visual effects similar to The Matrix; such as the slow motion effects and the fighting skills.

The general plot line is as follows: the main good guy of the film is John Cena a.k.a. John Triton. After getting dishonorably discharged from the corps for disobeying a direct order, he returns home to his wife. He promises to take her on a vacation, and that's when it happens. At a gas station the bad guys of the movie kidnap her and leave Triton for dead. But as they say in the commercials, he's like the terminator and doesn't die. The rest of the movie is a chase/stealth/shooter with a few good wrestling moves for a kick.

All in all "The Marine" is good movie, but I don't think its quite award-winning material. Nevertheless I would recommend it. As far as ratings go, the PG-13 and unrated versions aren't very different. In fact, I can't see anything different, as the unrated dvd comes with both PG-13 and unrated version on one disc. I believe the only difference is the aspect ratio; the unrated is wide screen and the PG-13 version is full screen. But that aside, the movie is above-average but far from perfect. WWE fans will love this and those who like Terminator-style gun play and Matrix-style animations will too.
Review Page Hits: 0 today (455 total)
mediahook