The only thing missing is originality. One of the best multiplayer games for the GameCube. 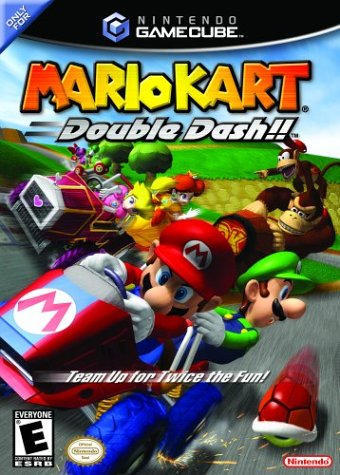 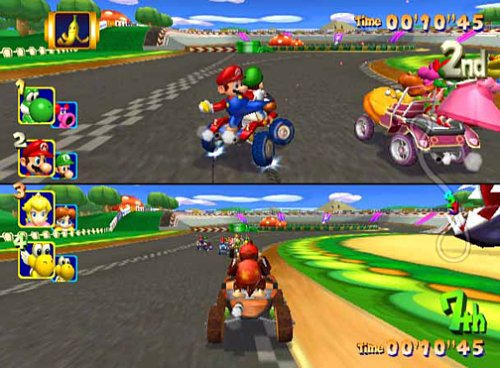 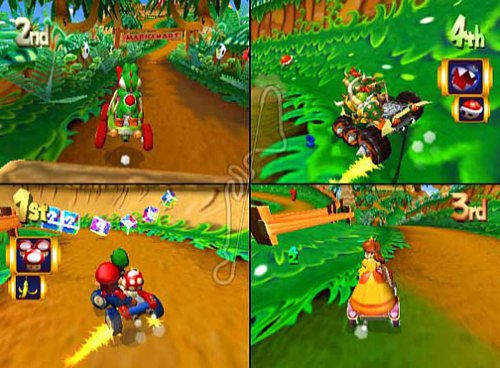 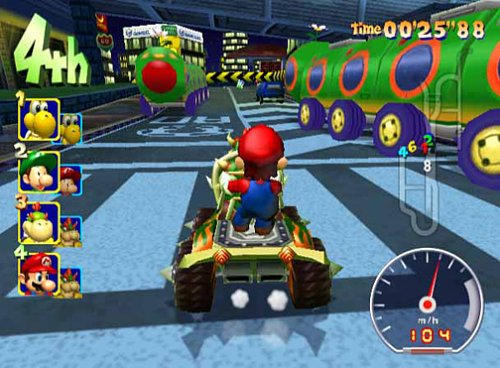 When this came out, people seemed to be divided into two equally sized groups, especially here at GameTZ. The first group said, "Wow, this game plays awesome and is a category killer for the system." The second group countered, "It's nothing new, we've seen it a million times and this is no big deal. Just another kart racer, no biggie." The bottom line is that both of these opinions are correct. The game is extremely deep and fun to play, but it is not a breakthrough revolution in gaming. If you are seeking the latter experience, look elsewhere. For all others, this game belongs in your collection. That said, Double Dash is, and probably always will be, a top 10 title for the GameCube. Other than the lack of originality, the game deserves the highest rating possible.

Gameplay is simple as always. Nintendo really knows how to shove it in other publishers' faces in terms of making a fun game with simple controls. Here, the big green button is "Go" and the red button's for "Stop." As you get better at the game, other buttons play a role. The "X" button fires whatever weapon or boost you picked up along the way and a rear view button allows you to see what is behind you. It is helpful to learn the shoulders' "skid turn", which when used three times on a single turn results in a quick boost.

As expected, the tracks vary between typical motocross action and the wacky stuff (flowers that bite, giant ball and chain dogs, huge open crevasses). Each of the courses is interesting in its own visual style and most also lend themselves to a particular driving style - all out speed, heavy weapons, more cautious, etc.

You choose your driver at the first screen and characters are divided into both size and power classes. For example, Donkey Kong and baby DK both have the same power (they are both able to drop a special HUGE banana) but one is large and one is tiny. Large characters have access to cars with high top speeds and solid weights. Small characters can choose from spunky vehicles with higher acceleration.

One departure from previous Mario Karts, and all other kart racers that spring to mind, is that here you choose two characters. This allows you access to two different special weapons. One character drives while the other mans the weapon choice. The bigger of the two characters determines the minimum size of your vehicle class. The upper right ("Z") button allows you to toggle between the driver and the weapon. Therefore, if your driver has a weapon you want to use, you just switch him/her on the fly into the rear seat and let it go. Likewise, if you collect a weapon you want to save, you can rotate that character into the driving seat and hope to pick up another weapon while you wait. Since each character can only hold one weapon at a time, there is some very basic strategy.

As you move along and progress by getting the various prizes, you unlock additional vehicles. My personal favorite is the red flying turtle car (only for 2 small characters), but you may find many to your liking. The game features 16 race courses (some are unlocked as you go) as well as the normal mirror mode. In addition to race mode, there is a battle mode with a variety of other tracks. I find this mode to be a nice distraction and it features "capture the flag", "3 hits" and other typical stuff.

Graphics are crisp and fun. If you have an adverseness to cuteness, this will again be a problem with Double Dash. Each of the special weapons has its own animation style. One of the best is baby Mario/Luigi's chain chomp autopilot. Unloading this in a crowd or just behind a crowd creates total carnage. The frame rate never noticeably drops and the whole experience is extremely smooth and cartoonish. Sound is very solid and catchy with many songs seemingly reused from other Nintendo franchises.

The whole key to this game is getting together with a bunch of friends and going off in race mode, with perhaps a few battles thrown in. There are a couple of courses where novices can regularly beat out the well trained. At the same time, there is plenty to practice that will allow the finely trained racer to clearly dominate the novice. Other than SSBM, I don't think there is a game for this system that is clearly so aimed at multiplayer modes. There is a co-operative mode, but sadly it's not that good. There just isn't enough action to merit this unless one of the two drivers plans to eat or drink while the other drives. Those looking for a great co-op mode (and who isn't?) will need to keep looking. Head-to-head is where it is at here.

Overall, this game represents an evolution in kart games. If that sounds like something that fits with what you want, you will in no way be disappointed. Endless replay and fun challenging courses await. Highly recommend.
Review Page Hits: 0 today (704 total)
mediahook