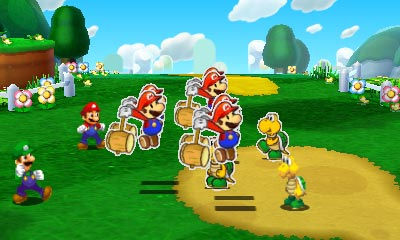 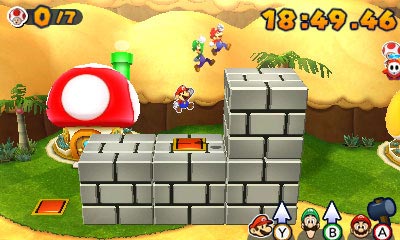 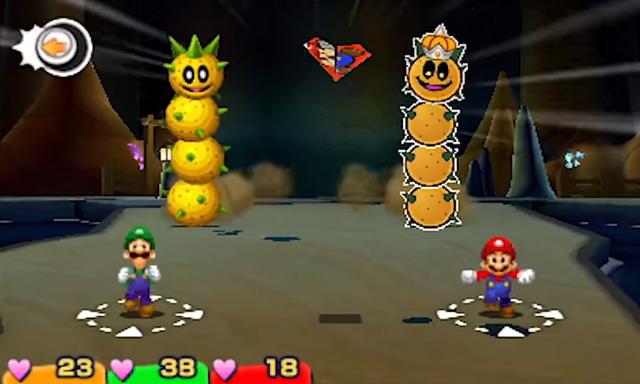 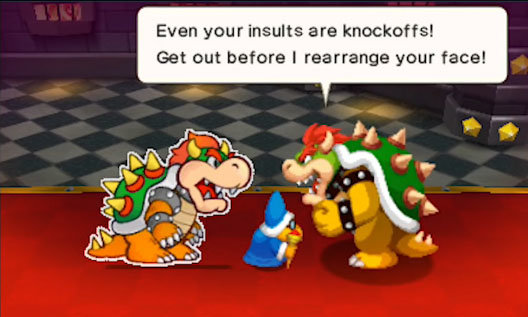 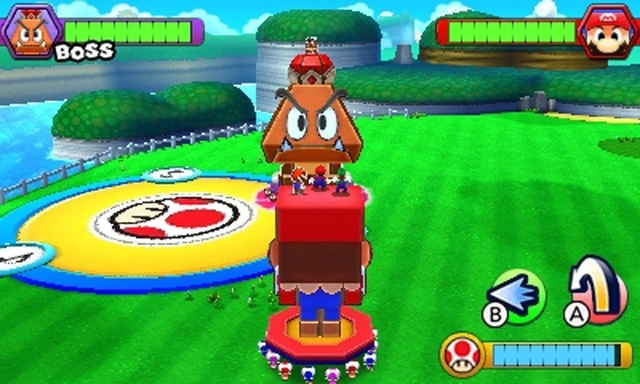 Ever since his first outing on the Super Nintendo in the realm of RPGs, Mario has been a familiar face in the traditionally teenage-faced hero and heroine dominated culture of the JRPG scene. I'd take an Ultra Hammer over an Excalibur any day of the week. That said, not all of Mario's RPG outings have been stellar. His two latest, Mario & Luigi: Dream Team and Paper Mario: Sticker Star suffered from an exhausting amount of required tutorials and obtuse design respectively. However, now with his most recent outing, Mario & Luigi: Paper Jam, many of the problems that plagued those aforementioned games are gone, though some new ones do pop up.

The latest Mario & Luigi features a much more simplistic story than past games. It's also much more cliche as well. When Luigi and a Toad are inside Peach's Castle's cellar, Luigi bumps into a shelf that opens up a magical book. In turn, this book unleashes a profusion of paper characters onto the Mushroom Kingdom, including the always silent Paper Mario. What happens next has both Bowser and Paper Bowser conspiring to and succeeding in capturing both Princess Peaches. It's up the team of Mario, Luigi, and Paper Mario to rescue them.

While the kidnapping of Princess Peach (or in this case, Princess Peaches) is nothing new for the Mario series and is actually a step back story-wise for the RPG series, the true star of Paper Jam's tale is the colorful localization and humor. Furthermore, while past Mario & Luigi and Paper Mario games outside of Sticker Star have introduced multiple new characters, Paper Jam isn't as creative, instead using all characters from the already established Mario universe. This will no doubt disappoint fans looking for the next Mr. L, Fawful,or Don Pianta, but for me, it was nice seeing characters that I was familiar with take center stage. While there aren't new faces to find along Mario trio's adventure, each character that enters the picture is full of hilarious, sharp witted, and charming dialogue, one of the things I always look for in Mario RPGs, and it's here in Paper Jam.

Mario & Luigi: Paper Jam's story has you traveling around the Mushroom Kingdom to six unique locations with sprawling maps to explore. Something that I personally found enjoyable was the lack of 2D side-scrolling areas with this Mario & Luigi sequel, making for more fun exploration. From grassy plains to parched deserts, tropical locales to specter-filled forests, Paper Jam offers a lot of foot travel for the Mario trio, and you're helped by Toads throughout the adventure. This is one of the key elements of Mario & Luigi: Paper Jam: rescuing Toads from capture or hiding.

There are over 150 Toads to collect in Paper Jam, and each one is part of one kind of mini-game or another, another common element of the game. While it would seem tiring to collect Toads again and again, the scenarios are so different and varied that the act of collecting Toads seldom feels forced or tedious. Sometimes you'll have to carefully explore a closed off area, combing the area for hidden Toads; others you'll need to move towards Toads, urging them into an area like a cattle rancher; while others have you fighting to rescue the Toads. This along with a great amount of other mini-game types, whether it's chucking Bob-Ombs at an attacking Koopaling or trying to dodge attacks for a set amount of time, make for a lot of gameplay variety that is quite welcome and usually always fun in Mario & Luigi: Paper Jam.

Additionally, there are special battles that pit your papercraft creation, created by the always adorable Toadette, against a myriad of other papercraft foes in combat. These battles have you charging into other enemies (particularly effective if you do it from behind them or when they're gearing up to attack), and then jumping onto them for the finishing blow as they lay on the ground. The battles don't take too long to advance through, but the need to recharge your energy through a simplistic rhythm game is a bit tedious.

As for the actual traditional battles in Mario & Luigi: Paper Jam, these are typical Mario & Luigi affairs. Much like exploring maps in the game, each member of the Mario trio is assigned to a button: A is for Mario, B is for Luigi, and Y is for Paper Mario. When you're exploring the numerous maps of the game, these buttons used in combination with one another allow the Mario crew to utilize different maneuvers to progress through the game, such as a giant hammer attack that can break large blocks, and a move that stands Luigi and Paper Mario on top of Mario's shoulders, stretching them out to grab faraway objects. You can even drill underground to move along floors and walls, as well as ride a makeshift Paper Mario airplane to cross large patches of terrain.

In battle, it's the same thing, where the A, B, and Y buttons control each plumber. This is obviously utilized when the brothers attack, but also when they need to defend or evade enemy assaults. Like past Mario RPGs, the battle system in Paper Jam is timing-based. That is, that when you attack, if you time your button press to the exact moment you make contact with the foe, you do extra damage. Conversely, when dodging, it's important to not only evade at the right moment, but it's important to plan ahead and use an enemy's visual cues to know which of the Mario trio is about to be attacked. As Paper Jam progresses, the enemies attack harder and their offensive patterns are more difficult to anticipate and avoid.

The bosses of Paper Jam are of course the ones with the most challenging attacks to avoid, plus they have the most amount of health points in the game. Many of these encounters have portions where Mario and Luigi will run towards the screen while being chased by a boss or handful of bosses. While you can use the A and B buttons to jump over small attacks with Mario and Luigi respectively, some require you to move Paper Mario, who takes the form of a paper airplane, over one of the plumbers so they can catch a quick ride, avoiding an otherwise impossible to evade attack.

While regular enemies and powerful bosses have plenty of powerful moves in their arsenals, so do Mario, Luigi, and Paper Mario. The three are able to unleash moves together called Trio Attacks, that can devastate foes when pulled off correctly. Trio Racquet, for instance, has the three plumbers playing a makeshift games of racquetball, launching a ball with proper timing against a wall where the foes are plastered upon. Like every move in the game, pulling it off well results in a congratulatory "Excellent" message, as well as the maximum amount of damage available for that move. Of course, Trio Attacks are the most powerful in the game, but because of this, each Mario trio member must be alive and status effect-free for them to be used. Alongside Trio Attacks are Bros. Attacks that return from past Mario & Luigi games, having Mario and Luigi use strong moves with BP, the magic points of Paper Jam, to unleash them.

After battles, the traditional RPG way is to earn experience. This is no different with Paper Jam. Unlike past games, when you gain a level, you don't get to choose which stat gets an extra increase. Instead, every handful of levels, you earn the ability to add a permanent upgrade to your character when they reach a level milestone. These are things as simple as increased power with every level increase to massively helpful things like a 25% extra damage increase when using hammers or jumping.

However, despite the sparing use of paper characters and abilities in Mario & Luigi: Paper Jam, the game is still a phenomenal effort. Specific alterations to the formula from past games make it a more engaging and enjoyable game. For one, the mandatory tutorials from Dream Team are a thing of the past. The tutorials instead can be accessed through a guide book in the main menu. Secondly, dialogue and story sequences can be slightly sped up by holding down the R button. This is fantastic for repeat plays, particularly if you want to try out the hard mode that gets unlocked after the initial play-through is completed.

Despite only having six or so major areas in the game to explore, Paper Jam is a lengthy play. It lasted me just over 26 hours, but this was with finding all of the item boxes, bean locations, and collecting every Toad. It was enjoyable from beginning to end, which is something I haven't been able to say for a Mario RPG in a long time. Who knew it'd be Paper Jam that would give me that chance.

Mario, Luigi, and Paper Mario are a formidable team, and the game all three star in is a great deal of fun without ever feeling too much like busywork. The lack of original characters might put off some of the more dedicated to past Mario RPGs, but to me, I appreciated seeing old, familiar characters from past games like King Bob-Omb, the Koopalings, Nabbit, Chargin' Chuck, among many others. Collecting Toads can feel tedious at times, but generally each scenario in acquiring them is enjoyable and varied. Overall, the battle system is as good as ever, the story's dialogue is as snappy and well delivered as ever, and Mario & Luigi: Paper Jam's improvements on past games make it as fun as ever.
Review Page Hits: 0 today (303 total)
mediahook