Fantastic game to play for 5 minutes or 5 hours. 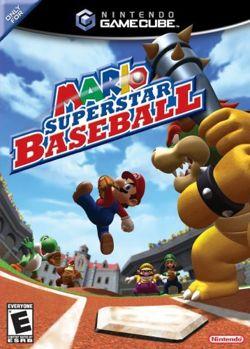 Mario Superstar Baseball for the Nintendo GameCube is a perfect goof-around baseball game.

Sound is to be expected. All the sounds match up with the image on the screen. I wouldn't imagine that sound for a baseball game is too complex to do.

Gameplay! This is where the fun starts. You can start off with just a basic game. Choosing a captain (Mario, Luigi, Daisy, Birdo, Peach, Waluigi, Yoshi, Diddy, Wario, DK, Bowser, and Bowser Jr). Choose the captain you wanna play against. Make your team from leftover captains and a grip of characters(Toad, Koopa Troopa, Shy Guy, Goomba, Toadsworth, Magikoopa, Dry Bones, Boo, Paratroopa, Baby Mario, Noki, Paragoomba, King Boo, and Pianta) although some are locked(Dixie, Baby Luigi, Monty Mole, Toadette, Petey Piranha, and Hammer Bros.). You can also randomize your team as well as your opponents. Place your players at the positions you chose, batting order, difficulty of your opponent and stadium then your good to go! Play ball!

Now that's Exhibition Mode. Challenge mode is kinda like a season mode. Pick your captain and either Mushroom, Flower, Star or Special and you start in a Super Mario 3 esque map. There are mini games and you go around to other captains stadiums trying to win and take their players. There are upgrades for players and you can turn them into star players by accomplishing certain tasks but be warned that some of them are extremely difficult!

Challenge mode is how you unlock players for exhibition mode. There is also mini games on the main menu along with the Toy Field. Practice mode is helpful, especially for learning how to hit home runs with Bowser Jr. Ball fields are littered with obstacles(except for Mario's). Yoshi has piranha plants, DK has claptraps, Bowser has lava pits. Characters have special moves. Birdo has suction to field the ball, Mario has a fireball pitch and Waluigi has a rocket arm when he is throwing to a player he has good chemistry with.

Chemistry is a unique feature where players that are "buddies" increase the chance of good plays. Shy Guy has a better chance of a hit when Birdo is already on base. It also works the opposite. Daisy's throw to Wario at home plate after a sac fly may not end so well since the two characters are not the best of friends. The use of team stars also changes the aspects of the game when pitching and batting. These wacky features can also be turned of as to make the game as normal as a game of R.B.I.

Replay value, I gave the game an A+. I believe this is a timeless game and as long as you have a GameCube and a copy of Mario Superstar Baseball, you will always have something to play.

The B- for learning curve is that it takes sometime to remember which characters are buddies with others. Which character is your second best pitcher when you need to relieve your first one. Plus you seem to always forget about those barrels in the outfield at DK stadium until they bust upside your grill.

It doesn't matter if you have 10 minutes till you have to leave for work or you need to zone out the wife for a couple hours, this game has you covered.
Review Page Hits: 2 today (222 total)
mediahook