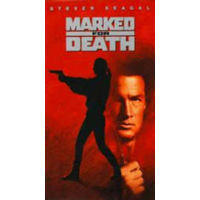 "Marked for Death" was immensely popular in Jamaica during it's release for obvious reasons; The god that is "tough guy" action star Steven Seagal is put up against a deadly Jamaican drug posse. Compared to most movies of the genre, "Marked for Death" ties in a semi-twisted plot, yet still manages to be no exception to the typical Seagal films.

Seagal's third full length feature, "Marked for Death", was actually a Twentieth Century Fox film, as opposed to Warner Bros., where the majority of his films lie. It must not have done too well, because it's the only film starring Seagal from the company. Being released in 1990, Steven Seagal actually looks like a somewhat believable action star here, being only 39 years old. Now that he's 51 and still making movies, he looks considerably younger here, than he does in his most recent attempt, "Half Past Dead".

The trademark ponytail is living at it's finest in this film. Rather than a typical cop film, Seagal stars as John Hatcher, a cop who recently retired from the Drug Enforcement Agency. However, when he returns home to visit his family he discovers that drugs have quickly infiltrated his old neighborhood. As opposed to being after some crooked drug dealer who's after his family in a typical drug-bust related movie, he's determined to drive a Jamaican drug lord known as Screwface, and his bandits out of his hometown. Like most Seagal movies, "Marked for Death"s plot is somewhat believable, except for the fact that Seagal is basically a one-man army, taking out Jamaican drug lords, which is something you don't run across everyday. Well, so the plot isn't overly believable, but it is somewhat original, yet retains the classic "tough guy" movie stereotype.

As stated earlier, the film begins with him leaving his job and returning home. After his buddy, a football coach, proves to him that Jamaican's are selling crack to his star athletes, Hatcher begins sticking his nose in "other people's business". One thing leads to another and soon Hatcher and his family are marked for death (get it?). After nearly killing his sister and her daughter, Hatcher and his friend embark out on a mission to kill Screwface. To make a long story short (and not spoil the ENTIRE film), Hatcher teams up with an FBI agent, who helps track Screwface down back to Jamaica. I'm sure you can figure out what happens next.

For "Marked for Death", like all Seagal movies, it's best to leave your brain at the door. Although in comparison to his other films, I thought the acting was pretty decent. The actor who played Screwface did a superb job, creating a villain that is both feared and hated by all. The tie-in with the Jamaican posses and spiritual rituals make the film all the more suspenseful and horrific, especially during the scene where Hatcher's sister is nearly killed. "Marked for Death" comes across as a senseless action movie and ultimately passes the test. There are plenty of great hand-to-hand combat scenes, with plenty of broken bones, which is something that is becoming more and more rare in his later films (and for good reason). He's young (somewhat) and agile (somewhat) here, so they make the most of it.

The one thing I loved and hated the most about "Marked for Death" was Screwface. He is such an outstanding villain that you love to hate, but almost in a frightening sort of way. That was the one thing that set this film apart from his others. A slightly different storyline, terrific villain, great one-liners, a plethora of great action scenes, and another great character name for Seagal (John Hatcher, it just makes you say "hell yeah!") make "Marked for Death" one of Steven Seagal's finer moments.
Review Page Hits: 0 today (134 total)
mediahook