This is easily the best game on the PS3, find out why 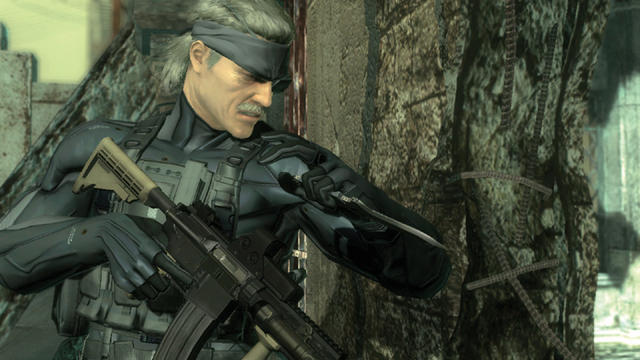 Metal Gear Solid 4 is the last game in the Metal Gear Solid series. It does an amazing job at closing the series. It answers every lingering question you may have about the series. Why Vamp can't die, why snake is so damn old, who the patriots are, and why they have so much power. That being said, it also has the game play to back up the amazing storyline, and is the perfect ending for a legend.

We all know Metal Gear games have a tendency to be pretty weird. This game is no exception, but it makes it all make sense. In the year 2014, the world is now controlled by the war economy, and there is constant warfare around the globe. This is accompanied by nanomachines that allow companies to launch PMC's without any combat experience. The nanomachines work with S.O.P which has master control over people. These nanomachines also can nullify pain, post traumatic stress, as well as increasing their skills in battle. The five main PMC's are Praying Mantis, Otselotovaya Khvatka, Werewolf, Pieuvre Armement and Raven Sword. Which are controlled by Liquid Ocelot. Snake is approached by Colonel Campbell, an old time friend, ad is asked to do one last mission, to assassinate Liquid Ocelot.

In terms of game play, Metal Gear Solid 4 has changed plenty. Now, it plays like a more modern shooter instead of those clunky controls of game's past. Now when you draw a weapon, you hold down L1 to look over the shoulder and then press triangle to aim through first person. When in first person, you can let go of L1 and you don't have to hold triangle down either, allowing a precision shot. MGS4 also has a revamped CQC (Close Quarters Battle) system. With no weapon drawn, hold down R1 behind a target to grab them, you can then hold them to the ground and search them for weapons; you can kill them, or put them to sleep.

The environments also complement the game play, seeing how the world is in constant conflict, it helps snake sneak around. You'll see constant explosions, gunfire, and soldiers screaming in pain through the first few acts. These soldiers can also come to be of use. If the militia see you killing PMC troops, the will become friendly, and will not shoot at you. It's also good to help the militia because they can help you get through certain areas unnoticed by the PMC. Now, MGS4 is a stealth action game, but you don't have to play it that way. You can go into the game like a standard action title and get mixed results, but I'd still recommend that you stick to stealth.

Drebin is a gun launderer, and becomes a contact that can get you weapons. He becomes a very useful asset as the game goes on, as he allows you to collect Drebin Points. With the new Drebin Points system, you can customize weapons to your liking, which will allow you to add scopes, grenade launchers, and even shotgun attachments to your guns. Also, this will allow you to finally pick up weapons off of the enemies you kill, making it that much easier to enjoy, instead of hunting for weapons and ammo.

Snake is using a new octocamo suit, which allows him to blend in with the environment. It's a big step forward from the camo in MGS3, but don't rely on it too much, because if an enemy gets too close, he will still spot you.

You have a Metal Gear at your disposal in this game. No, not like Metal Gear REX or REY, but Metal Gear Mark 2. The little thing has stealth camo equipped, and you can use it to sneak around and stun enemies using its shock attack. This is also what carries your excess gear and accessories, and links you to like the codec used to.

The solid eye will become your best friend as you go through the game. It is like radar that works on sound. Anything in the area that emits noise will show up on the solid eye. It also has a binocular mode, as well as a Night Vision mode. The solid eye works on a battery, and as such, you can't rely on it throughout the whole game, and will have to turn it off every once in a while.

In MGS3, you had to constantly worry about Snake being fed, so that he would perform the best he could. In MGS4, that translates into the Psych meter. This shows how snake is mentally as the environment is around him. It also directly affects his performance on the battlefield. As the psyche meter goes down, Snake starts to tremble, making it harder to land shots. Also, when Snake is climbing or swimming, the psych meter will change to a grip or O2 meter.

In the graphics department, this is easily the best looking Playstation 3 game available. No bland textures, the characters animate well, lighting is amazing, and shadowing is also very good. When an explosion goes off, you'll see blood spatter on your screen, the constant warfare going on as your trying to sneak around looks and sounds amazing.

Metal Gear Solid 4 also comes with the Metal Gear Online starter pack. They plan on expanding this later with more packs and game modes. It uses the gameplay of MGS4 and throws it online in the MGS universe. You start off by making a Konami ID and GAME ID, which is a real pain to do, especially since the game just shoots you a link to the website which you browse on using the PS3. The site is very slow and it's really annoying to have to make 2 ID's when you have your PSN ID to use. The game ID is what people see, and the Konami ID is going to be used to buy additional content. You then login and create your character. You get one slot free, and then you have to pay to get another slot, kind of like an MMO. When you create your character, you chose 4 base skills for him, including thinks like an Assault Rifle skill, SMG skill, CQC skill, and so on. As you use the skills in the game, they will level up, making your character better with said skill. All in all, it's an okay addition that wasn't needed and it doesn't work too well in the MGS universe. It will appeal to hardcore MGS fans, but the average gamer will not get into it.

In the end MGS4 does exactly what it was advertised to do. It wraps up the story of Solid Snake, and it does that very well. It even manages to make MGS2 make COMPLETE sense, yeah I know, crazy. It's a great game that I believe everyone should play. And for those who haven't played a Metal Gear game before, go download the free MGS Database off of the PSN and it will tell you all you need to know.
Review Page Hits: 0 today (218 total)
mediahook