The First Slug in Your Pocket is a Good One. 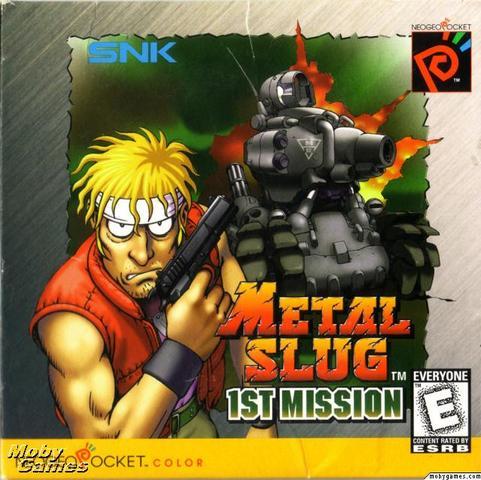 Metal Slug: First Mission (MS:FM) is the first outing of the series on SNK's portable. This game is not a port but rather a new game for the NGPC. You're a soldier that must wage a one-man-war against a rebel army where you must destroy their facilities to get to the leader of the rebels.

Gameplay & Control
The Metal Slug series has always followed the choose-your-own-path way of advancing the story. This means that depending on which door you enter/exit or whether you leave a level at the top or bottom each will take you to a different level. To fight you have your standard pistol and grenades to begin with but you can acquire new and more powerful weapons like flamethrowers and rockets by defeating enemies. When an enemy is killed they either drop coins or some sort of random object (like a frog for instance) that gains you points that can get you more continues if you happen to die. Aside from gathering these items you must keep an eye out for POWs to rescue to help complete the game.

The controls work just like the arcade version, i.e.: meaning very well. The analog stick emulates that arcade feel very well and is easy to use for movement. One nice thing about the analog stick is its 360 degree ability when firing a gun. The A button is use to fire while the B button is used to jump. With the limited amount of buttons on the NGPC the Option button, when press quickly, switches your gun for grenades and vice versa. Pressing and holding the Option button then pauses the game.


Graphics & Sound
The graphics are nicely detailed in MS:FM but overall are a little bland. It's no doubt meant to come off a little bland though for a war time look and feel though. The character animations are nice and kind of funny when an enemy dies. Explosions are a big factor in the Metal Slug series and it is no different here. When a big boss is destroyed the whole screen is filled with the effect. There is one down negative in the game though. When there is too much action of the screen there is a little slowdown. The sound design is great in MS:FM. SNK has designed it as a more military style of music, much like other Metal Slug games, so you can hear the drum beats which adds a nice touch to the feel of military combat.


Replay Value
Having the choose-your-own-path way of gameplay means you'll be playing through the game many times to take each path and beat each level. This isn't a problem either because the game is a lot of fun to play. However there is nothing to unlock once you beat the entire game and there is no co-op. One nice thing is that you can continue your save by choosing S-Continue instead of having to start all over again from the beginning like in the arcade conversions of Metal Slug. This is very helpful considering MS:FM is a portable game.


This is a great action/adventure game for the Neo Geo Pocket Color with very fun gameplay and a cool military feel. Any NGPC owner should pick this game up.