This 3-D conversion of the great Metroid series worried many at first, but made jaws drop upon release. 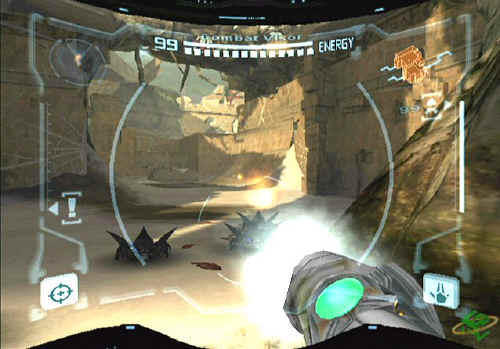 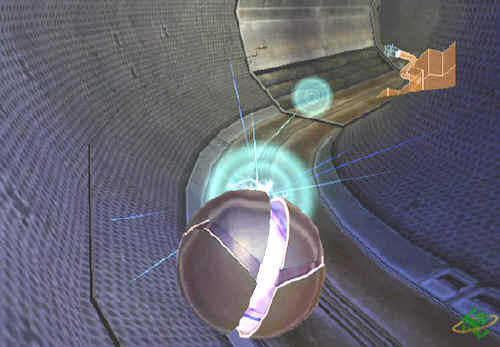 Metroid Prime is an American made First Person Shooter game based on the classic Nintendo game, Metroid. Metroid was more popular in the United States than in Japan so it really makes sense to make the Gamecube game over here. So, Nintendo worked with RetroStudios to make a damn fine game. Since Rare was bought by Microsoft, the new close relationship between Nintendo and RetroStudios could not have come to a better time. If Metroid Prime is a good example of what we have to look forward to from RetroStudios, then who needs Rare on the Gamecube? This game is really important to Nintendo because of the legacy of Metroid.

The level of detail in the world on Metroid Prime is really something else. The virtual environments are all meticulously modeled and textured to be organic and rich. There are almost no boxy repeating levels that you expect to find in a typical first person shooting game.

This game also sports some great lighting shades and pixel effects such as glows. When you shoot a charged beam there is this really neat Matrix like visual rippling as the energy ball distorts the frame buffer in a 3-D space.

The music is very moody, and Metroid Prime, like every other Metroid title, has a fantastic soundtrack.

The creatures that inhabit the worlds of Metroid are a mixture of new and instantly recognizable creatures from the now over a decade old 8-bit game. The Bosses match environment and are fun to fight. There usually aren't very good bosses in FPS games so this is quite a treat.

The game is a lot about searching environments and solving puzzles, with a good mix of action like the original 2-D games. There is no multiplayer and no online play but it is not really needed because it is a damn good first person experience.

The controls are easy to move around with. You can look vertically and lock onto targets by pressing a modifier trigger on the top of the controller. Also, there is the classic Metroid rolling into a ball to fit into small secret passages. This is a cool example of real time physics as Samus rolls around the tunnels and canyons self lit with a pixel shade.

In my book, this game is better than Halo and some people thought that Nintendo needed games like this to attract the so-called "mature" market to their small but powerful game system. But as for me, I don't think Nintendo has ever disappointed with its franchise titles.

This would be a fine choice as a first Gamecube game if you don't already have one.
Review Page Hits: 0 today (682 total)
mediahook