Mother on GameFAQS
Mother on Wikipedia
Mother on Starmen.net

The beginning of a great trilogy! 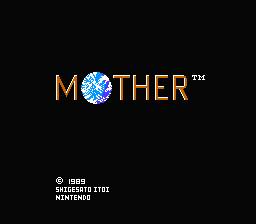 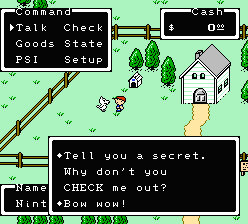 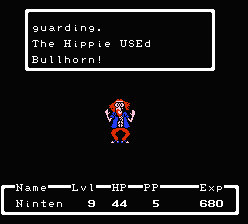 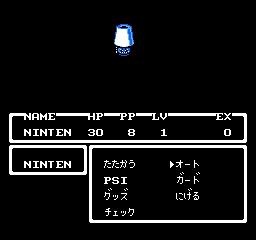 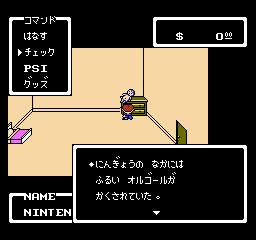 A lot of people may not know this, but EarthBound, the biggest sleeper RPG game on the SNES, has a prequel. This video game is named after a John Lennon song of the same name, odd as it is. This game was almost released in the United States under the name "EarthBound", but marketing issues and fear of the game flopping kept the game from being an international title. A prototype came into existence (with quite a few changes to the original) and Demiforce, a game translator group, got a copy, hacked into it, and renamed it "EarthBound Zero" for clarification. To this day Mother, especially EarthBound Zero, is one of the most popular NES imports out there, not to mention the cartridge has a nice blood-red color to it!

In the 1900's a young American couple was abducted by a group of aliens. Two years later, the husband came back and did certain "studies" all in seclusion. No one knows what happened to the wife. 80 years later, 1988 to be exact, a young boy named Ninten was minding his own business when a poltergeist attacked his house. After the incident, he called his dad, who told him that strange things are happening around the world, and Ninten must find new friends, explore new places, and collect 8 pieces of a melody that will solve the mystery and defeat Giygas in order to save the world! Along the way Ninten and his friends will meet goofy characters and find strange lands in his quest. This story certainly feels more endearing than EarthBound, although it's not as funny. It's a little bit spooky, too!

The charm of the game is the gameplay: An RPG set in the modern world. You run around in an overhead view, talk to people, and do battle with strange foes, such as a hippie, a cigarette-smoking crow, a grumpy neighbor, 1950's cars, and extraterrestrial aliens, via a Dragon Warrior-like battle mode! Instead of swords, cloaks, and magic, you'll use baseball bats, lucky coins, and PSI to fight and protect yourself, along with hamburgers, asthma spray, mouthwash, and "life-up cream" to replenish your health and cure you of poison. There's tons of people to talk to, each one with crazy things to say (some people will give you colds!). You'll traverse though towns, forests, swamps, mountains, and even a magical world, where its existence is the key to all the mysteries that surround the game. It's very easy to get KO'd in this game, particularly the beginning (where you'll have very little experience) and near the end (where the enemies are strong!), and you WILL get all 8 melody pieces before you can even beat the game, and there's few clues to where they are, let alone where to go next! And, of course, you'll have to do tons of grinding in order to even survive.

It may not be the fanciest Famicom game in the world when it comes to graphics, but this game does very well on this area! Ninten looks like Charlie Brown, most of the world looks very grassy, Magicant is dreamy, the factories are heartless, and the mountains look rocky! Each place has its own unique charm separate from each other. The enemy sprites look quite detailed, with a crazy or scary look to them.

The music is the second strong point of the game and, in my opinion, is better than EarthBound itself! Every tune is pushed to the limit for an RPG. From the first town and creepy crypt to the snowy village and the final mountain, every song and ditty has the word "win" all over themselves! You know a game has a good soundtrack when you catch yourself humming or whistling to its songs.

Although not as known as EarthBound, this game is good enough to gives its famous little brother a run for the money! Despite its difficulty and grinding, the music, charm, and characters are more than enough to make you want to put this game on your import wish list. From the moment you flip the switch to your Famicom/NES system, you'll be hooked from beginning to the end. The impression will last a long time. This is how great games SHOULD be made!
Review Page Hits: 0 today (292 total)
mediahook