The gameplay could have been enhanced a bit more, but the same great football game you have come to enjoy over the years is still the best any fan can hope for. 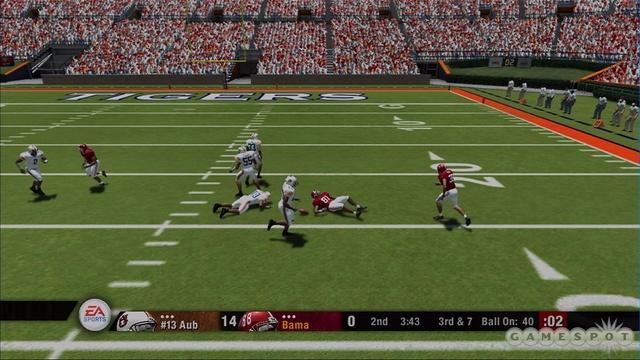 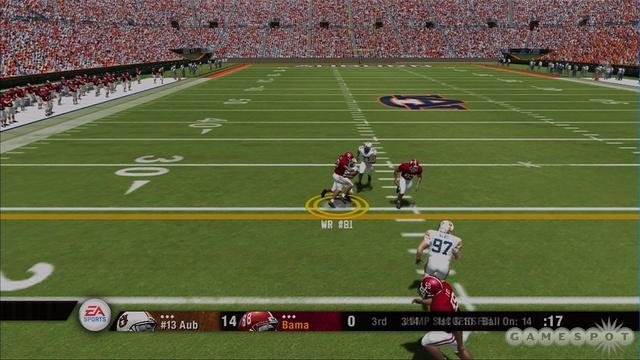 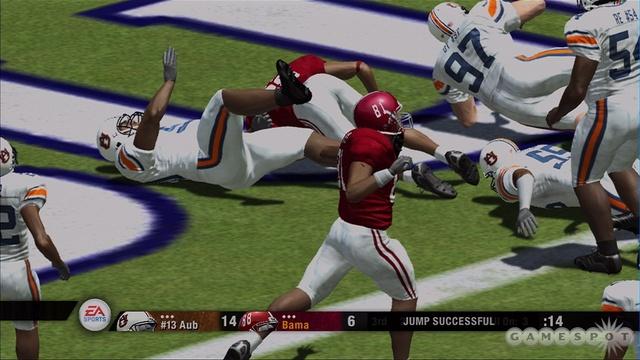 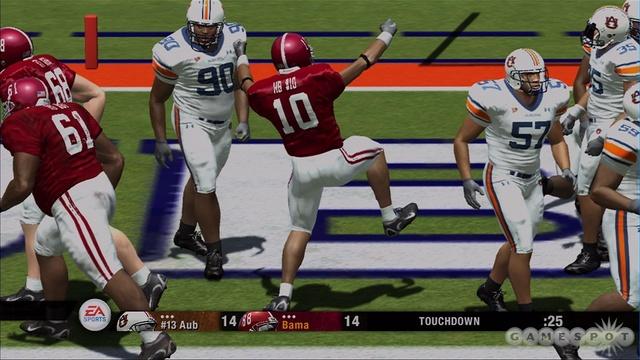 Last year's NCAA 07 title may have been the best college football game in a few years, but it still lacked that one key component to make it the truly best college experience around. While NCAA 08 expands the gameplay to offer deeper and richer customization options, the lack of any notable changes for the on-screen options or presentation make this addition feel almost similar to last year's version, which is fitting on both ends of the football spectrum.

The game still plays relatively the same to last year's version with a few minor tweaks thrown in. The play-calling moves at a much faster pace this time, and players will not stand around waiting for you pick a play. The problem with NCAA 07 is that it mainly relied on the amount of downtime you experienced during each play, and NCAA 08 does a good job of organizing the menus for easier and faster movements. Picking plays is easier than ever as you can arrange each section by formation, type (run or pass), and even strength (such as if it is going to be a long pass or a short pass). This new feature makes things run a lot smoother and never bogs you down with choosing a new play.

Playing the game is still relatively easy for fans of the series, but newcomers may find it hard to grow accustomed to all the buttons. While executing plays on the offense is quite a simple feat, the AI never truly feels adequate to cater to your specific difficulty. Constantly the computer will pick off throws that are impossible to catch with even four hands, let alone two. Even on offense the computer exhibits almost near perfection in passing and shutting them down is literally impossible. The high jump from All-American to Heisman difficulties seem rather unbalanced as well, with games making veterans feel like rookies after dominating a perfect season beforehand.

A new mode called Super Sim allows you to take full advantage of your time by allowing you to skip through sections of the game you find irritating or tiresome. Hate trying to guard that wide receiver on defense? Simply simulate over your next defensive stand to make things easier for you. This new feature not only allows you to skip over series of downs, but also quarters, halves, and even entire games. You can even pause the Super Sim at any moment to regain control in case your team starts to play on autopilot and you need to regain composure. Utilizing Super Sim correctly can turn inevitable hour-long blowouts into short twenty-minute games.

NCAA 08 is definitely more hands-on than previous games as there are plenty of things to keep you entertained for a good while. You can still set up a game and hike the ball any time you please, but with the new ability to personally call recruits on the phone, as well as build up your own custom character from the high school gridiron make replaying the game an incredibly high factor. One of the best new features is called Campus Legend, in which you literally live out your college fantasies through a muscle-clad football player. Starting out as a high school player, your career ends during the State finals in which you play to impress scouts of various college schools. If you manage to do well, you will get offers to different school at the end of the finals and how well you will be positioned on their team (some higher ranked schools may make you a third string player or lower).

Once you pick the college of your choosing it is up to you to gain that starting position job as well as maintain a steady supply of academic knowledge. While the old cliché may see the jocks as boneheads, keeping up with your schoolwork is vitally important in order to remain successful in '08. If you start slacking off in class or fall behind, you will be forced to sit out games until you improve your grades. Besides studying hard, you must also choose how well to spend your free time, whether it be going out with friends or practicing new plays on the field. Different scenarios garner different points and as you accumulate enough points, you can ultimately gain that starting position spot. Once you actually manage to play games, things will move at a much faster pace since you only play when your player is on the field. Choosing plays is never up to you, and although sometimes you may never get the ball or a decent play called, proving yourself to your coach is what is truly important.

Dynasty Mode is still well intact in NCAA 08 and a few new things make this addition better than ever. Like Campus Legend, you have the chance to participate in recruiting, but instead or picking a school of your choice, you set your sights on 25 various players all of which have admirations of playing at your college. You can start off by sending them memos in the mail that you are interested in their attendance, and if they happen to respond, you can even schedule meetings, phone calls, or scrimmages with your team. Once you narrow it down to a few worthy players, you can set-up practices and interviews in which you discuss campus life, such as pep rallies, games, and even girls.

The amount of customization and flair that was put into Campus Legend and Dynasty Modes is a welcome change, but more could have been done to the already dry formula of college football. While different teams can face off to create classic showdowns (such as Rivalry Games and Grudge Matches), there isn't a whole lot of "college" in the overall scope. Gone are the marching bands, pre-game pep rallies, mascot fights or crowd interaction. It hardly feels like a college game at all and if the faint music in the background was not playing the school's fight songs, you may not be able to tell the difference anyways.

The presentation seems to have taken a step down as well. While the gameplay didn't need an overhaul to remain solid, the same cannot be said about the visuals. NCAA '08 shows no apparent upgrades from last year and characters still look abnormally disfigured. It is nice to see characters having the right size bodies for their positions this time around, but there are still occurrences of 300-pound linebackers chasing down wide receivers. The crowd hardly looks decent either, with no apparent solidarity between any two people. Every person moves in comparison with the person next to them, and movements are constrained to spastic arm movements and head turns. It only ever looks decet from afar when the different colors make it seem like everyone is doing their own thing.

The commentary, which needless to say is terrible, is probably the worst and most annoying part of the game. Constantly the bonehead commentators will be talking about plays, which happened two downs prior, or even talk about things that don't even relate to football whatsoever. Lee Corso is still the most annoying thing to ever happen to ESPN, and every time he talks it is always the same thing- to choose his play cause it's the best (which it never is).

Multiplayer is still a major selling point for the NCAA series, and although nothing has changed, it still plays rather well. Lag is apparent in most cases (even in co-op), but it only ever happens during the menu screen, which is really mind-boggling. The game seemed to move faster on the Xbox 360 during online play but not by a fairly large margin, as both slow down occasionally to be noticeable.

With all of the new features in NCAA 08 this version feels a lot more in depth and intuitive for fans. The endless amount of customization and recruiting available allow for endless hours of replay in order to build up both your character and team throughout the years. The gameplay could have been enhanced a bit more, but the same great football game you have come to enjoy over the years is still the best any fan can hope for.
Review Page Hits: 0 today (393 total)
mediahook