Next in the line for the NFS series. 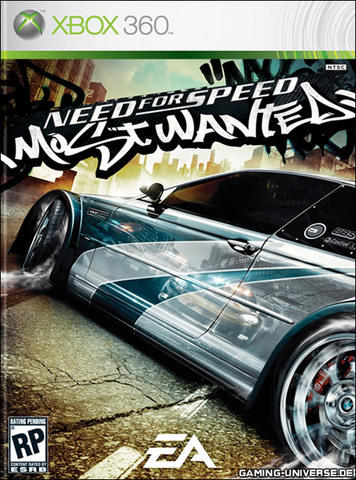 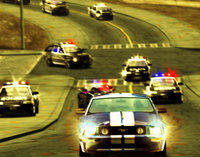 NFS: MW is a nice edition to the NFS series and it returns to the whole cop-outlaw formula. Though if you don't have a 360 yet, you wont be able to play this version.

NFS: MW looks GREAT. Of the 5 360 games I own, it probably looks the best. Granted, each of those titles have their strengths and weaknesses, but on the whole this game looks fantastic. As usual, NFS: MW does a great job of depicting the high speeds at which the player is transverses its landscape.

The sounds, while not great, do their job. The different cars have a different whine from their engine and you can hear the breaks as you press on them but it is nothing spectacular. The mediocre sound is made up for with the really good soundtrack though. The soundtrack has some hip-hop, some rap, and some rock. While I am not a fan of the former two, I do appreciate the quality that this game has on it's soundtrack.

Now on to the gameplay. Take your basic racing game and add cops. It is almost as simple as that. There are a few different types of races, but that is all this game really boils down to.

More on the re-edition of the cops: They really add a bit more patience to the game. You can still speed through the city, but should a cop get on your tail you will be hard pressed to shake one, as usually when you finally DO shake a cop, you run right into another one. My only beef with this system is that if the cops do catch you, you aren't really penalized, save for a bit of money. They definitely are nice, though I would like to see more of a consequence for being arrested, as they seem more like an annoyance than a gameplay factor that should be taken into account.

This NFS game has a bit of a harder difficulty than the recent editions, but the bottom line is if you're an NFS, or any racing game for that matter, vet you wont have a problem with this game save for one or two instances.

Bottom line: If you really want a racing game for the 360 right now, get this or PGR3. Personally I prefer PGR3, but if you were a fan of the NFS series before go ahead and pick this up. Otherwise I would just wait for something a little more "wow".
Review Page Hits: 0 today (227 total)
mediahook