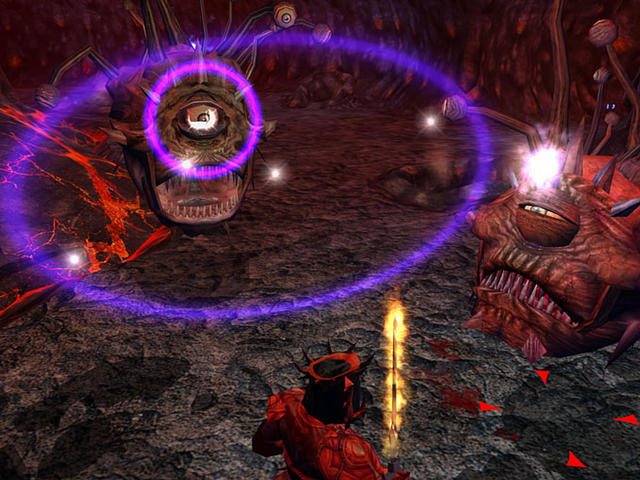 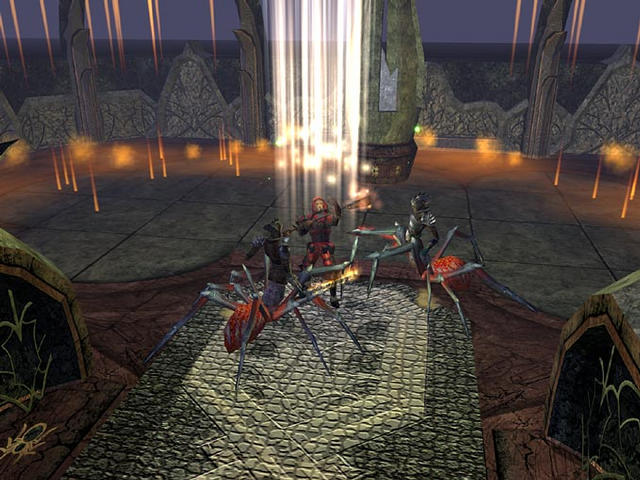 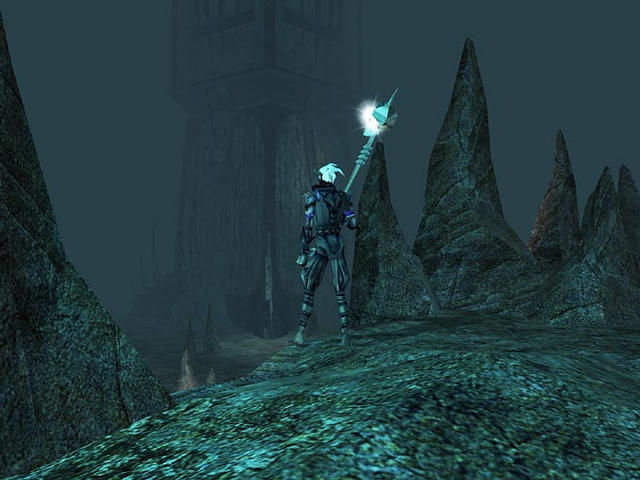 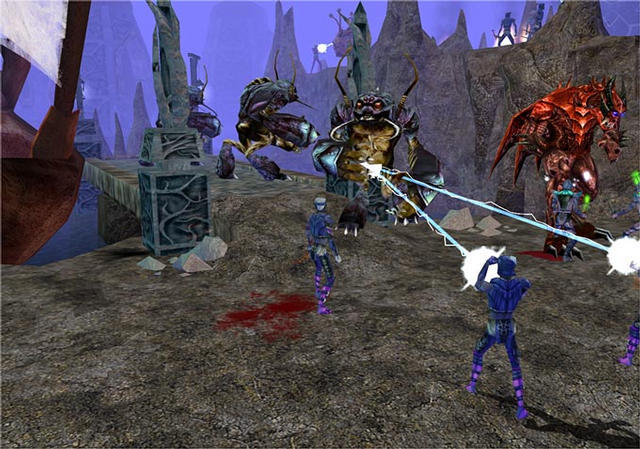 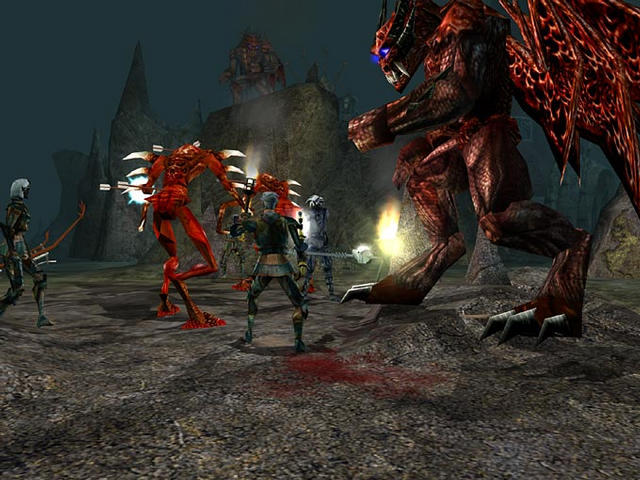 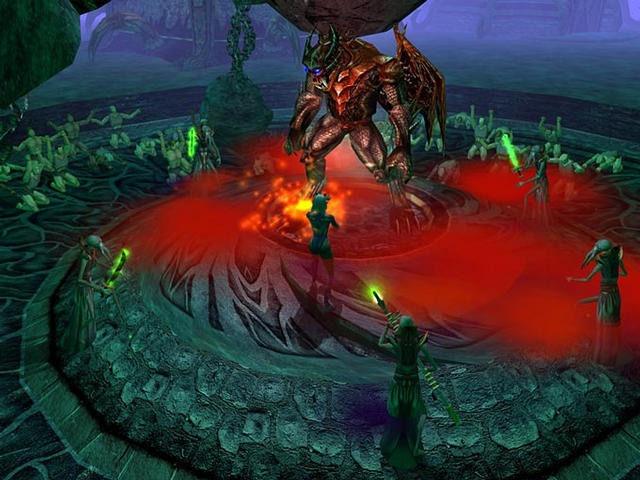 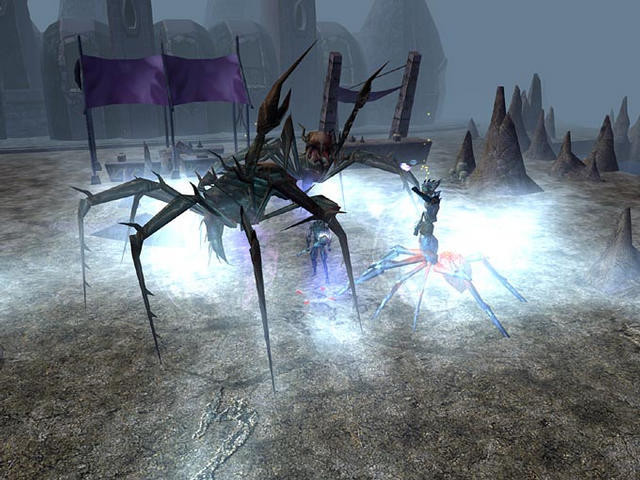 This is an epic adventure that will take your character into the "Underdark", a classic underground area that is known as an evil and vile place to any RPG game. In this installment of Neverwinter Nights, your character has been called to aid the citizens of Waterdeep from an invasion of evil creatures that have come up from the "Underdark", and are being led by a ruthless drow priestess known as "The Valsharess", and she is intent on destroying this great city and its people. After character creation, you wake up in the Yawning Portal, the town's Inn, which is run by a retired adventurer called Durnan. He fills you in on what is going on within the city, and has also taken in five "Henchmen", four from the original game, and one from "Undrentide". After you find equipment,
Durnan tells you that there is a tunnel in his Inn that leads to the "Underdark", but you must first go thru the famous dungeon known as "The Undermountain", an incredible and twisted place built by a mad wizard called Halaster Blackcoat. Most of the "Henchmen" decide to take off on their own, and they go ahead of you into this dungeon, and part of your initial quests is having to find them. So once you are ready, you take off into the "Undermountain", and your adventure begins.

This expansion pack is considerably more difficult than the others, so for that reason there is a requirement that the character you choose must be at least level 12. During character creation, you have some options available to you in order to meet this requirement. One of the options is to choose a character that is already made up for you by the game, and this character will be at level 12 or higher. You will still be able to change certain things about this character to make it your own, like name and voice track. If you choose to just create a character from scratch, than once you are done, you will be given a chance to level ALL the way up to level 15.

The Prestige Class feature that was introduced in "Undrentide" is also incorporated into this game.
The five classes that you had in "Undrentide" (Harper Scout, Shadowdancer, Assassin, Arcane Archer, and Blackguard), are still available, but there is also six more that have been added to this expansion game. They are: Dwarven Defender (Champion Dwarven Fighter), Pale Master (Necromantic mage), Champion of Torm (Mighty warriors who defend holy ground), Red Dragon Disciple (Sorcerers or Bards who have the power of red dragon blood), Shifter (Relies on hiding themselves in alternate forms), and Weapon Master (Masters of single melee weapons). Just as before, these classes must meet certain requirements before your character can become them.
Another superb addition to the Prestige Class feature is that now you can reach "EPIC" status. The character reaches this state after level 20, and once they do, you gain MORE bonuses and special abilities in addition to what you had already been granted.

Of course, like any other great RPG, there is always some nasty monsters to battle, and "Hordes of the Underdark" does not dissappoint in this area. Some of the creatures you will encounter in this game include, Beholders (have many eyestalks that shoot beams of energy), Driders (bloodthirsty creatures), Gelatinous Cubes (can immobilize and devour an adventurer), and Illithid (can paralyze an opponent).

There are a couple of excellent additions to the "Henchmen" feature in this game. First, you are now allowed to have two "Henchmen" accompany you on your adventure, and at times there may even be a third plot-important NPC that will join you, but they usually will not stay long. The second change, is that you now have control over your companion's inventory, and this is activated thru the radial menu system that can be used by pressing the right mouse button when centered on the particular NPC.

One of the coolest new features in this game is the ability to craft weapons and armor. To use this ability, the character must have the Craft Armor and Craft Weapon skill. During the course of the game, you can collect materials such as wood planks, steel, and feathers. Using these items in conjunction with the skills mentioned before, an adventurer can create armor and weapons.
Another great skill is the ability to poison weapons with such things as Spider and Giant Bee poison.

There are still great skills to choose from, like the Craft skills I mentioned earlier, and Intimidate (adds dialog options that enable you to talk your way out of situations). There are some great new feats that will help the mage type character be a better spellcaster. They include: Brew Potion (create any potion of any spell 3rd level or lower), and Craft Wand (create a wand of any spell 4th or lower). Along with the Epic status of the Prestige Classes, you can also be granted Epic feats. These feats can include such things as: Dragon Shape (Use Wildshape to change into ancient dragon), and Epic Spell Focus (gains +6 to Difficulty Class for all saving throws against spells).

Graphics are superb in this game, and everything is stunning and wonderfully rendered. Sound is excellent with plenty of ambient sounds, and environmental sounds that make your adventure seem real. Don't forget that there is also some great voice tracks to choose from to customize your character with. The interface is easy to use, and everything is still set-up the same way it has been for the other two games. Gameplay is excellent, and everything that I thought was missing in the other two games has been added in this expansion pack. Replay value is VERY high, and that is mainly because of the choice of Prestige Classes to play, and the ability to go back and play the game again as another class. Learning curve is really non-existent, since you must have the original game to play this expansion game, than you probably have played the original Neverwinter Nights, and therefore whatever you learned in that game can be applied to this one.

Last but not least, is the additions to the Toolset feature. New Tilesets include: Underdark, Frozen Wastes, Drow Interior, Illithid Interior, and Beholder Caves. There are also new Wizards and items that pertain to the mage classes.

Like I have said before, I don't think there is any way you can go wrong with any Neverwinter Nights game, so I would highly recommend this expansion pack, and be prepared to enjoy it for hours on end.