A game to boost your coin-centration 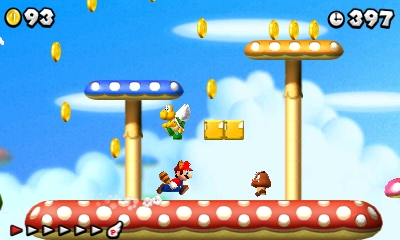 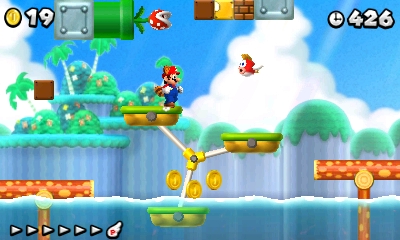 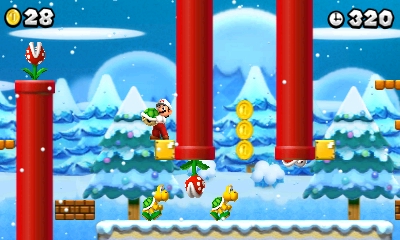 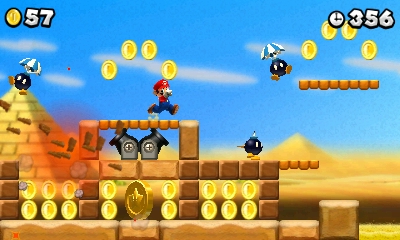 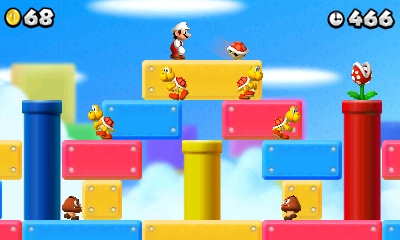 It was the summer of 2012, and Nintendo was gearing up to release its newest home console, the Wii U, later in the fall. However, rather than just release one game in the New Super Mario Bros. line, Nintendo opted to create two, one for the Wii U and one for the Nintendo 3DS, the latter of which became New Super Mario Bros. 2, the one that released in the summer. Why Nintendo felt the need to release two similar platformers in the span of four months, regardless of being on two different systems, is anyone's guess, but it did make New Super Mario Bros. 2 less exciting of a game. While it doesn't hold a candle to its Wii U counterpart, it's still a competent platformer all the same.

Nintendo needed something to distinguish New Super Mario Bros. 2 from its bigger brother releasing the following fall as a Wii U launch title. To that end, the game was centered around collecting as many coins as possible. Coins are handed to the player in all manners in New Super Mario Bros. 2: lying about in levels, hiding in special blocks that Mario can wear on his head, in gold rings that turn enemies into golden versions of themselves to leave trails of coins behind them, and even a Gold Flower power-up, which launches gold fireballs, turning all blocks hit by it into coins and giving Mario a coin bonus for each defeated enemy.

As you can probably guess with this overload of coin collecting, 1-ups in New Super Mario Bros. 2 are pretty fruitless to collect. After all, you're easily going to collect 100 coins for a 1-up that way in a given level, if not multiple times. It makes it so you'll never see the Game Over screen unless you either try, or do terribly in the first levels of the game.

A running coin tally across all three included save files tracks your total amount of coins collected, and at certain thresholds, you earn messages highlighting coin achievements. If you go the distance, you also earn two special prizes for reaching one million and by collecting the maximum amount of coins. Unfortunately, these prizes are hardly worth it, and they seem more like booby prizes than anything else.

A secondary mode in New Super Mario Bros. 2 to help assist in collecting coins, if you still feel the need to do so, is called Coin Rush. This mode has you play three random courses, trying to collect as many coins as possible. You have a Gold Flower that can be summoned from the touch screen to be used in one level, and if you hit the top of the flagpole at the end of a level, whatever coin total you have currently is doubled. There are downloadable level packs available for free and to purchase that feature all-new levels, one of which features some of the hardest challenges in a non-Kaizo-Mario Mario game.

As for the standard adventure, New Super Mario Bros. 2 is a lot of fun. It's Mario, and it's still really good. The level design is a notable piece of the game, as New Super Mario Bros. 2 was developed by a younger team of fresh talent at Nintendo. There are lots of genuinely clever ideas in these levels, too. One ghost house has you escaping from a giant Boo known as a Boohemoth, while another has you using the Mini Mushroom power-up to skim along the edge of a body of water, leaping over instant-death spikes as you perform multiple platforming stunts to stay alive.

Many levels house smartly placed secrets that require intuitive investigation of peculiar-looking areas, where usually you can find one of a level's three Star Coins, the main collectible of the game, or a secret exit that leads to alternate paths through New Super Mario Bros. 2's worlds. Some of these secret exits even lead to special cannon levels, which are auto-running endeavors where timing your jumps as well as bouncing off enemies either lightly or with force can be the difference between success and falling into a bottomless pit.

The special cannon levels take you to two worlds that are otherwise inaccessible to players. Unlike Worlds 1-6, these Mushroom and Flower worlds do not have a unified theme to them, and they are more difficult affairs. After beating the game initially, a third secret world is unlocked, the Star world, which can only be accessed through collecting many of the game's aforementioned Star Coins from the previous worlds.

While most secrets in the game can be found with the right amount of investigation and deduction, the developers of New Super Mario Bros. 2 sometimes overly use the "hidden block" trope used in other Super Mario Bros. games. This is where jumping and hitting an invisible block will reveal a beanstalk to a new area. Most of the time these have a tell, but sometimes they do not, and that's when trying to find some of the game's secrets can be rather... well, frustrating at best and really unfair at worst.

Mario moves and controls as well as he ever has in a 2D Mario in New Super Mario Bros. 2. His controls are tight, making you feel like you're always in control. Walking and then running into a standard sprint feels great, and using that to transition into a series of jumps, all culminating with the ultra-sweet triple jump, is awesome as ever. Mario keeps his ability to wall jump as well, something borne out of the very first New Super Mario Bros. game. Alongside these acrobatic moves, Mario can utilize a ground pound to break up blocks below him and quickly dive-bomb with ease.

New Super Mario Bros. 2 features a standard repertoire of power-ups, such as the Fire Flower, for one, but it also brings back the Super Leaf from Super Mario Bros. 3 to turn our portly plumber protagonist into Raccoon Mario. This form allows Mario to fly temporarily when he gains enough speed on the ground to take off, and it enables him to twirl his tail to take out enemies. Mini and Mega Mushrooms also return, though the latter is only used in a couple of levels and has never really been too exciting anyway. After all, just running forward, crashing through everything-- pipes, enemies, and blocks-- isn't what Mario is really about, as with the Mega Mario form there is no real platforming to be found.

Visually, New Super Mario Bros. 2 isn't a particularly fascinating game. The character and models are serviceable enough, but they keep that sterile, clean feeling that even fans of the New Super Mario Bros. line find boring. The backgrounds are equal in this regard, too. Even the 3D effect that the Nintendo 3DS produces isn't that enthralling or striking. That said, the game runs incredibly smoothly, which makes for a pleasant experience. On the sound side, Mario's use of vocal clips is cute, but the music mostly recycles everything from past New Super Mario Bros. titles, which just comes off as a lazy effort all-around.

While not exactly the gold standard for Super Mario platformers, New Super Mario Bros. 2 is ultimately a competent and highly enjoyable title. Though the central gimmick of coin-collecting wears thin and isn't used to its full potential, it is great fun trying to increase your coin total through taking advantage of each level to its fullest. The level design is impressive, housing myriad secrets, and Mario feels as good as ever to control. Seeing as New Super Mario Bros. 2 is now part of the Nintendo Selects line, it's as good a time as any to go on a coin-collecting expedition with Mario.
Review Page Hits: 0 today (404 total)
mediahook