Someone forgot to put the new in my New Super Mario Bros. 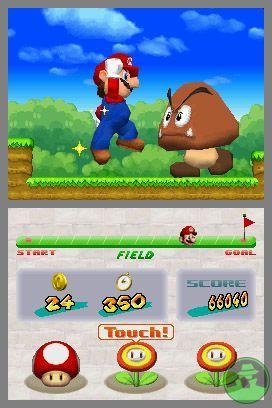 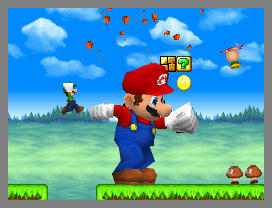 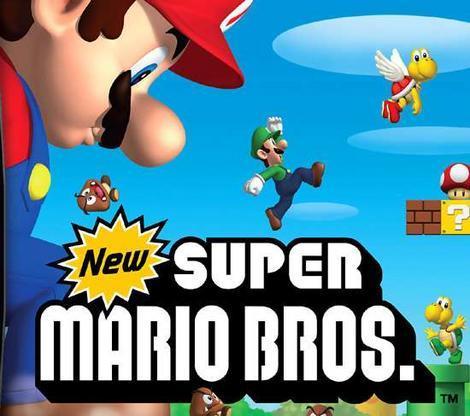 For at least two generations, the name Mario has defined gaming. For some, especially parents who purchased a video game system for their kids in the 80s and 90s, if nothing else, knows exactly who Mario is and it may be the only video game they ever played themselves. But since the 1991 release of Super Mario World, an original side-scrolling title starring Mario as the fat, mustached plumber we all know and love was not to be had.

Now, with the release of this new, side-scrolling Super Mario Bros. game, retro gaming has seen a huge resurge, thanks obviously to trading Web sites like GameTZ.com, along with a new marketing campaign of apparel, stickers, accessories, etc. that can be found at just about any major retailer. Nintendo's take on the New Super Mario Bros. is, thankfully, much more than their take on the aforementioned new wave of merchandise (along with the string of Super Mario Bros. re-releases on the Game Boy Advance): to take something old, give it spit shine, shove it back out onto the shelves and enjoy the extra revenue.

But what is painfully evident to anyone who has grown up playing over and over again all the previous Super Mario Bros. games is that the "new" in New Super Mario Bros. is not for us, the classic, well-played fan. For us, the "new" is to stand for "new adventure." For the people this was developed for, a new generation of side-scrolling players, starting from the youngest players and going up from there. In lamest terms: to develop a new base of Super Mario Bros. 2D fans to compliment the existing base and build off of that for future installments.

If you keep that thought in mind as you play the game, it is a bit easier to swallow. The game starts out as most Mario titles in general do: the Princess has been kidnapped by some Koopa/Bowser-related baddie, in this case, Bowser Jr. Now Mario must bound his way through eight worlds to rescue her. Each world is made of a bunch of levels you can pick from the main map before entering, ala Super Mario Bros. 3 and World, while aesthetically drawing from the game boards in the Mario Party games. Each world has a mid-boss castle and a final boss castle (protection provided by Bowser Jr. and Bowser, respectively). There are Toad Houses you can unlock by fulfilling certain level requirements or by spending Star Coins collected in levels. All pretty standard Mario fair, right? On the surface, yes.

Nothing is more surface level than the graphics, and they are the first thing that will grab you when booting up the game for the first time. The bright, 3D-rendered graphics used are flat-out awesome. To give it some context, it feels much like the first time I played Donkey Kong Country for the Super Nintendo, how great the gap was graphically between it and any side-scrollers before on the system. That is what this does for the DS. 3D-rendering gives the game the feel that the certain parts of the level and the characters are almost sticking out of the screen, something the wonderful use of shading and perception can be thanked for. Everything is wonderfully animated, with Mario's arms flailing at different speeds depending on how fast he is running, water and lava flowing along, sun rays softly shining down, wings flapping on a Koopa or a "?" block. There are even some nice particle effects, such as the burning ashes falling in World 8. It is really a game you have to see in action to truly appreciate the time and effort put into crafting a top-notch presentation (something that Nintendo has severely neglected in many of its previous DS games, most notably Advance Wars DS and Yoshi: Touch and Go).

To go along with the graphics, the sound effects and music enjoy the same excellent touch. The music mixes in new renditions of classic Super Mario Bros. themes along with some toe-tapping new ones. The sound effects follow the same formula, mixing in classic staples like bricking breaking and coins tinging along with some great new sounds, my personal favorite being the death cry of the Piranha plants. Pump all that through the stereo speakers of the DS or through a nice set of headphones and you will really upgrade your experience.

After the initial enjoyment of the presentation begins to wear off and the actual gameplay comes into your mind's view does the game begin to show its true nature of being a building block for the next, albeit younger, generation. None of the Super Mario Bros. titles has ever been a demanding game in the challenge department, but this game is obscenely easy. The game sets you up so that you would have to work extremely hard to receive a "Game Over" screen. Not only are 1ups plentiful, no thanks to the 1up Toad Houses, but mushrooms and fireflowers seem to come every few screens. There is one level, in World 2, where the space between two powerup blocks is one screen's worth! This is also not helped by the powerup Toad Houses, so you almost are never without a fireflower equipped or waiting in your pocket. It's the feel good game of the summer because there is no real way to lose!

While on the topic of powerups, the new powerups, sadly enough, have nothing close to the gameplay impact that the suits from Super Mario Bros. 3 or the cape World had. The wall jump move, new to this game, plays a for more vital role than all the new powerups combined. As for these new powerups, two of which are taken from the Mario Party series, they are: the mega mushroom (which makes Mario the size of the screen); the mini mushroom (which makes you the size of a couple pixels and feather light); and the shell suit (which allows Mario to slide through enemies and blocks). From start to finish, I only landed the mega mushroom twice: once in World 1, where it's found in-level, the second I pulled it out of a Toad House and used it randomly somewhere. It's neat the first time, plowing through everything in the level, blocks, baddies and pipes flying everywhere, but it serves almost no real purpose and that's why it never pops up in-level. Same with the shell suit, which is awkward to control because it is activated by pushing down and you don't know how often you touch down until you activate the suit and slide into a pit. The mini mushroom shows up the most often of the three, and is the key to unlocking quite a few of the secrets in the game. Being small is interesting, since you can run on water and your jumps are high with a float down effect, but unless you need it for a mini pipe or to beat a boss to unlock World 4 and 7, you'll probably just stick with the standard, the fireflower.

My fiancé had a different experience with powerups though. She only got the mini mushroom once or twice, but ended up using a mega mushroom, acquired mainly from Toad Houses, in almost every boss level. She found the mega mushrooms extremely useful, and said she doesn't think she would've used the mini mushrooms much even if she had gotten them more often. Either case, there is a bit of a balance issue afoot.

Despite its complete lack of challenge and disappointing new powerups, is a blast to play. The great presentation, tight controls and condensed, though at times uninspired and/or rehashed levels, make for a smooth pick-up line that is hard to not indulge in. Bouncing and breaking and stomping and running around has never induced a more solid state of fun or felt more natural. But the biggest crime is that one weekend of play, or one all-nighter, and most of the game is beat. There are very few extra or secret levels to unlock, and once those are finished, that's it for single player. Thankfully though, Nintendo tries to make up for this with 26 of the touch screen mini-games (some new, some from Super Mario 64 DS), which can now be played wireless between 4 players and a Super Mario Bros. style multiplayer. In that, one player takes Mario and one takes Luigi and you both bounce around a scaled down level, earning stars and stealing them away. All it takes is a few rounds and the screams of "You took my $#@!$$@ star you stupid #@#%#%!!!!" will erupt. Great fun, though a few more levels would have been much appreciated.

If you are new to 2D Mario adventures or are more of a casual gamer, then this game is a wonderful addition to your gaming library and you can bump my overall grade up a letter. For the old guard, you'll be wondering in-between plays, "Who forgot to put the "new" in my New Super Mario Bros.?" Either way, the New Super Mario Bros. is, without a doubt, one of the safest purchases for the Nintendo DS and is a perfect way to treat yourself this summer, regardless who you are.

The stone for the new generation of 2D Super Mario Bros. fans has been set by Nintendo. Now let the next stone bring both the new and old generations closer together. And then there will be much rejoicing....
Review Page Hits: 0 today (185 total)
mediahook