One of the best RPG/strategy games for the Nintendo 64. 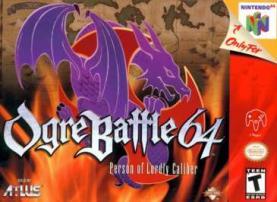 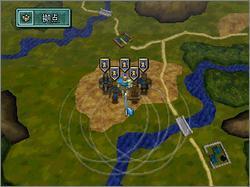 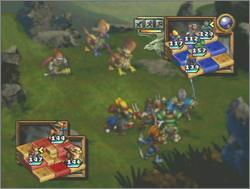 Ogre Battle 64 is, in my opinion, one of the more underrated games on the 64. This is not because it is a poor game, it just hasn't been played by most of the general public. Yet it most definitely is worth the time and money spent finding and purchasing a copy. Moving on...

The gameplay in Ogre battle is... unique. While this is an RPG, it has a completely different feel then Final Fantasy or Breath of Fire. Instead of monitoring the growth of one group of four characters, players in Ogre Battle can monitor the equipment and status of up to I think ninety characters. These characters are organized into units of up to five characters a piece, which are then sent around the scenario map to do various things.

This set up is very, very cool. Why? Well, it is almost as complex as you want it to be. Don't like messing with ninety characters? Fine. The game can be beaten with just the main character. Or maybe you like complete control? That is also fine. Have a class swapping frenzy so that you can completely control the stats of every character.

Oh, and as too classes. That is another great feature of this game. The game features somewhere around one hundred classes. A ''class'' is much like a ''job'' from FFV. It is the role that specific character takes to help the team. These classes only become available once the basic equipment is available, somebody has the proper stats, and that same person also has the proper alignment.

Alignment is another good feature. It basically is a measure of how lawful your units are. For example, Paladins can only be created with a character that is highly aligned, or lawful (duh). And Berserkers can only be created from low alignment units, which are non-lawful (More duh)

Not only does alignment affect your characters, it affects your ending. Different enemy strongholds have different morals, and only a unit with an alignment close to the morale can liberate that city. Any other unit will capture it. Why is that important? When a city is liberated, it raises your ''Chaos Frame'' (CF) When a city is captured, it lowers your CF. Your CF determines your ending. So alignment is important

Nice Audio! Very nice! If you have any spare change, buy the soundtrack. They have great sound effects. The soundtrack itself is also awesome. Parts such as when the Revolutionary Army, Destin, Saradin, and some other heroes come in, a very cool soundtrack is played. The Audio at the start screen also has the cool casual music just like all the others. The music is defintely something to listen to.

The graphics for this game are some of the best I have seen on the N64. I mean, they may not compare to the graphics of today, but you can tell that the makers took a lot of time for the sprites and even the backgrounds. Also the character portraits look very well done. When it comes down to it, the graphics in this game just rock.

This game can be difficult at certain points but it is no where as hard as Final Fantasy Tactics,
so you wont be stressed out as much there is a lot of planning and leveling though. The controls are easy to use! You have a cursor! Just like a computer! So its very entertaining and very easy to use. The only reason I dropped it .5 is because sometimes the cursor jumps around. That's the only reason why though. Otherwise the controls are very easy. Move the control stick to move the cursor, A is select, B is back, R is bring up the menu, and start pauses.

Well, this game is one of the best--if not the best--RPG for the N64. Sure we have Paper Mario
and a few others, but this one stands out as a must play for 64 owners who love RPG/strategy games.