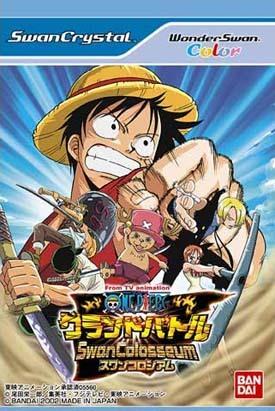 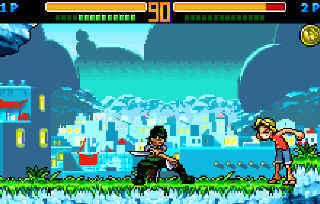 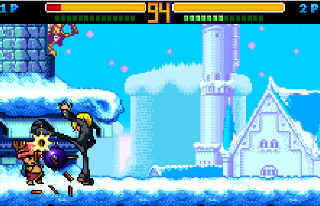 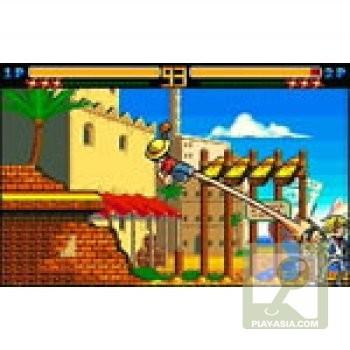 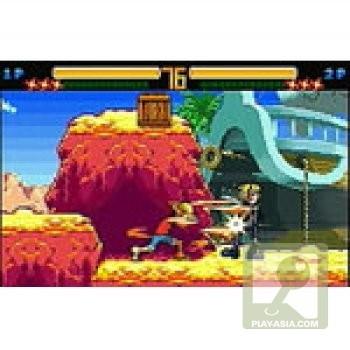 One Piece: Grand Battle Swan Colosseum is a 2D fighting game for the Wonderswan Color/SwanCrystal. Since I have never seen the cartoon, I assume the plot in story mode follows that of the show. The plot is also slightly different for each character in who you fight and why. Unlike other fighters on the Wonderswan, this one falls short.

Graphics
The graphics are very nice in this game and take advantage of all the colors on the SwanCrystal's pallet. Animations are smooth and nice to look at. When you perform a special move, the game goes into a still-cutscene of the attack before it goes back to the gameplay so your character can finish its attack.

Sound
The sounds work well. I assume they are tunes from the show, but there isn't much variety in them.

Gameplay/Control
Gameplay modes consist of story mode, which I covered above, and single play either against the computer or a friend with a link cable and a second copy of the game. There are also mini games that need to be unlocked in order to play. Control is where this game falls flat on its face. There is only one attack button. One! It's frustrating for a fighting gamer to use two buttons let alone one to attack. This leads to a very high learning curve and difficulty.

Replay Value
This is a good thing, as the replay value is very high. There are seven characters to unlock to play as, two additional stages to fight in, a third special to unlock for some characters, as well as an insane amount of cards to collect.

This game is an alternative to other Wonderswan fighters like Pocket Fighter and the Guilty Gear Petit series, however, it isn't as good as those mentioned. Its downfall is the fact that there is only one attack button. However, at the price of roughly $15 off of eBay, it may still be worth picking up if you don't mind a challenge and you've beaten the crap out of Pocket Fighter and Guilty Gear Petit.
Review Page Hits: 0 today (308 total)
mediahook