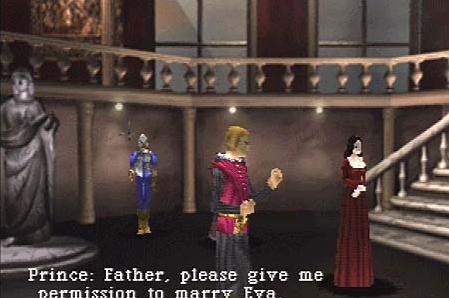 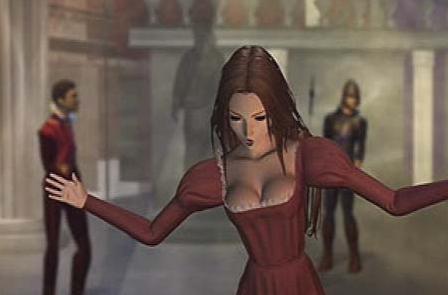 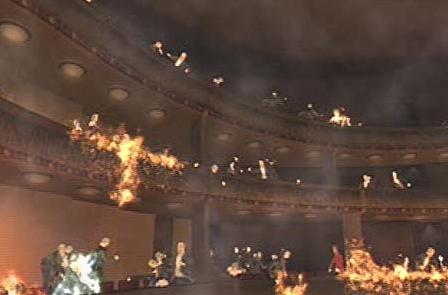 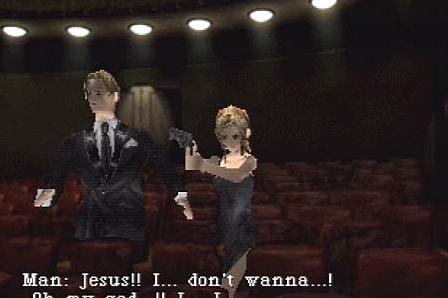 This is by far one of my favorite games. In the late 90's this game offered both RPG and survival horror (thriller) elements, Even though Koudelka also did this, which was a great game as well. These types of games offered a kind of new genre, leaning neither one way or the other, and unlike Koudelka, this game also offered upgradeable equipment, as well as charactera, with bonuses for beating the game like Resident Evil did.

You start the game as Aya Brea, an officer on a date at the opera which Aya doesn't seem to want to be at. You walk into the theater and the opera starts. When Melissa AKA Eve Starts to incinerate the audience you, as Aya, go after her. Your game is about to begin.

The game's controls are easy enough to figure out when it comes to movement around the different areas. With an action button to interact with objects i.e. open drawers or use the phone (Save), a cancel button, and even a button to go into your inventory and character status.

Fights, on the other hand, are set up like any RPG you might have played. The screen changes into fight mode and you can choose to attack, use an item or PE powers to heal or do massive damage, if you get a high enough in level to obtain these powers.

Equipment in the game is found and upgradeable. The downfall of this could be that if you start to upgrade an awesome piece of armor in the beginning you may not want to exchange it later. However, when upgrading you can take stats you have built up on one piece and exchange them to another, which disappears afterward so make sure it's the right one.
You can only exchange one set of stats for armor or weapons, either protection and attack, or the other being skills. For instance, if you have built up power on a gun but you like it because of its rapid fire, you're only going to be able to move the attack power or that ability for rapid fire, this is the same for armor. Armor also has skills, such as auto-potion, or extra carrying capacity. But to move skills to another piece of equipment, the equipment you're moving it to needs free slots to hold these skills. Whereas stats can just accumulate.

In a way this could be easy to figure out. On the same note, knowing what's available and how to make that perfect piece of armor or weapon might take some time, which you can bring with you in your next playthrough, should you chose to do so.

I really found no issues with controls, being a hardcore RE fan in the beginning and playing lots of FF games, so moving on to these controls were fine. There is a bug your first time in central park, but if you look it up you should find an answer to it.

With the storyline and atmosphere I think this makes for really good gameplay.

A little bit about my ratings:

Gameplay:
I would have to say that this game is a lot more like a thriller than a horror RPG. I think the original movie was even a thriller as well, or classified as one, but I have never seen it, I don't think many have. I give gameplay A+; its unique style and atmosphere allow you to enjoy what you're doing. As far as controls are concerned, I have never had a problem. The status screen and other options in this game could confuse you in the beginning if you where new to these types of games, but enjoying the game will make this much easier to learn.

Graphics:
For the time this game came out there's still no excuse for the graphics; it could've been done better. Graphics during gameplay could be considered worse than Resident Evil, which is an older game, however, the movies in this game are awesome. At the time of its release, I used to have a favorite videogame store, the place was huge and had everything, and i mean everything, and I had not seen much that could compare. The movies were just beautiful and these movies where added throughout the game. That's why I have to give this game an A- for graphics. If you don't think the movies make up for the graphics, then you've been spoiled with today's games. Back then they were not that bad, and I have played worse a lot worse.

Learning curve:
The different ways to approach this game. First: Try not to care about weapons or armor, just kill lots, gain levels, beat the bad guys. If, on the other hand, you decide to get into upgrading, this could be a bit hard to do, unless you've been through the game a few times. With the added secrets and such, it all depends on how much you want to put into the game. The learning curve for players who just want to see the end credits, then let the game sit on a shelf for 3 years won't find it very hard. Those who like to know every aspect of a game they play will find it a little more difficult all around. I will have to give this a B rating: not too hard, but could be.

Replay Value:
This is definitely an A+ with the bonuses for finishing the game and the new area obtained after completion. It makes it something that you could definitely play again right after finishing.

Sound:
Also an A+. The soundtrack for this game is great, despite not having voiceovers, and the background music kind of just blends in. While playing, your odd bleep or whatnot from using your inventory or such is not very attractive, but other than those sounds I'd say it's not bad. I play my games in 5.1 with tower speakers though, so my sound may differ from most other players.