This is the classic Rufio album. 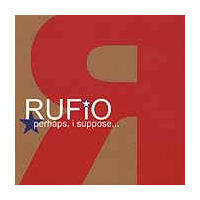 At the time Perhaps, I Suppose was released, Mp3.com was THE website to hear new music from unsigned bands. A young group from California topped the charts frequently with their 5-song demo. Their name was Rufio, named after the character in the 1991 film, Hook. Around the same time, a small booking agency called The Militia Group, run by a guy named Rory Felton and his buddy Chad, decided to start a label of the same name. They took a chance, signed Rufio, and put out their debut album, Perhaps, I Suppose. Little did they know it would go on to sell over 50,000 copies and therefore pave the way to make their label a top contender in the emo/punk music scene.

Perhaps, I Suppose kicks you right in the face from the start. "Above Me" basically sets the mood of the album, and it starts with a bang. Blazing fast harmonized guitar riffage and speedy double time punk beat drums blast throughout the tune. Any pop-punker who had never heard a speed metal band thought guitarists Clark Domae and Scott Sellers were amazing. The fast paced, so-Cal punk style songs were not necessarily new to the genre. Bands like Strung Out, Slick Shoes, and even bassist Jon Berry's old band, Sick of Change, had been doing it since 1999. What really caught the fans, was vocalist Scott Sellers pop punk vocals. Catchy harmonies, great hooks, and a clean voice were what made Rufio a hit even with the ladies.

While tracks like "Dipsh*t", "Selfishness", and "Save the World" soar, there are some softer tracks to win over the hearts of the skaters' girlfriends. "One Slowdance" takes a hint from The Ataris' "I Won't Spend Another Night Alone" or MxPx's "GSF" with the slow dance feel, where "Tears" and "Face the Truth" feature slower, more mature sounding tempos. The band even cranks up the shredding on tracks like "The Wrath" and "Stop Whining".

It's not the slow songs that Rufio is known for however. It's the speed pop numbers like "Still", "In My Eyes", or "Just a Memory" that they are known for. There's enough variety here to keep a non-punk listener entertained as well as enough speedy punk to keep a punk enthusiast happy.

Perhaps, I Suppose is the classic Rufio album, including the hits "Above Me", "Save the World", "Road to Recovery", "Still" and "In My Eyes". No other release by them even comes close. This album actually did so well that in August 2005, The Militia Group re-released it, remixed and remastered with the original 5-song demo that got them signed. Since then, Rufio has tried to slow the tempos and go for a more Yellowcard sound, but it's the Perhaps, I Suppose sound that makes Rufio, Rufio.
Review Page Hits: 0 today (141 total)
mediahook