This is one of the best Game Boy Advance games. It's the Crystal/Yellow version of the Ruby and Sapphire Pokemon games, meaning it has more options and more creatures, including both legendaries. For a GBA game, it does not disappoint. 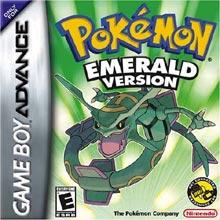 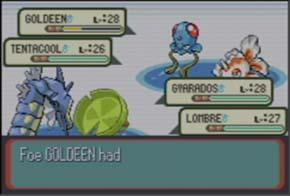 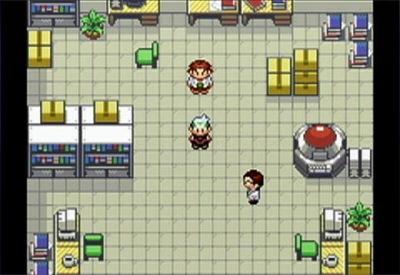 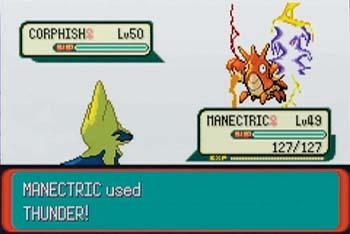 This is my personal favorite game for the Gameboy Advance. It's fun and long, but not boring. The graphics are slightly better than on Sapphire and Ruby. The small animations of rival Pokemon are less pixelated and more fluid-loving than on Crystal, but this is to be expected, as it is a new generation. The battle frontier is a nice addition. It's basically a remix of the battle tower. It definitely adds a kick to the game.

As far as basic gameplay goes, the game follows the Pokemon tradition, which is that you're a trainer, you get a pokedex and are tasked with filling it up with information about Pokemon, so you choose a starter to go through the land and battle to improve your skills so you can become the master of Pokemon. The technicalities of the game are that of a turn based role-player/adventure game. As is with almost every new version of Pokemon (save for Yellow, Crystal, and this one) there are new Pokemon to find, battle and catch. What I mean by save for this one, is that Yellow follows Red and Blue, in the Kanto Region, so the 150 (plus Mew) Pokemon are the same with just a few differences. The same goes for Crystal and Emerald. The differences usually involve a slightly different story or the choice of multiple paths, or maybe some new twists or modifications in the gameplay, sounds, or graphics. But in Emerald, the main twist is a chance to get both Sapphire and Ruby legends, and a choice of two other legends. Also, you can catch Rayquaza (the green snake-like dragon on the box art) at an earlier time also, but you have to FIND him to progress in the story. You then can catch him later on.

Overall on this game I'm gonna break it down for you

graphics: 4/5
Taking the Gameboy Advance NEARLY to the limit, but leaves room to improve. I like the little animations. This is the second game they're in, Crystal was the other. They make it seem as if the game has better graphics, but leaves me to think: If they could do this in this version, why not all of them?

Sound: 3/5
Still that polyphonic sound and with the simulated cry of Pokemon, but in my opinion, I don't think the players will be focusing on the music. The game is very fun, and when a game is fun, this means that the players focus on the gameplay more than anything.

Fun Factor: 5/5
Yes. What we need in an RPG. It's a good, long game with things to do instead of waiting around and trying to figure out what to do next. Very nice. The new Pokemon also give you an extra choice of tactics in battle, whereas the new Abilities can help you in wild Pokemon battles and maybe even out on the field. The contests are a nice add-on, though not needed, spice up the game. But it is fun for some (and me) just as every part of the game.

Length. 4/5
Like all Pokemon games, you beat it and there's not much to do, but this one has some add-ons. Like I said, the battle tower will drive you to get better Pokemon to win it all, and because of the "equal level" rule, you'll wanna raise your Pokemon equally so you won't want to have 1 level 59 Pokemon in a level 50 limit room, Making every other Pokemon in that room 59 and your others level 30'ish. It pushes the gamer. Nice!

Replay value: Moderate 3/5
Like I said, the game is a good, long RPG with lots of things to do, and in the Pokemon games, the main quest is to complete the pokedex by catching every Pokemon in the games, so that alone will take months, even years (this assuming no cheat device is used) because Nintendo splits up the games into versions to make players have to trade to get every Pokemon, and this game is no different. But with all the battles, and the new Battle Frontier, I think the real effort will be applied to the leveling up and battling part.

Whether you're a Pokemon fan or not, if you're looking for a good RPG, here it is.
Review Page Hits: 2 today (182 total)
mediahook