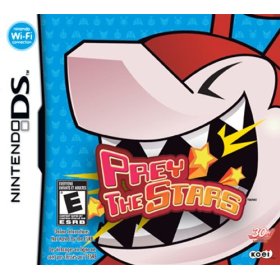 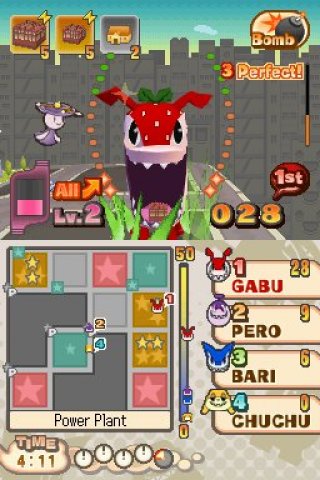 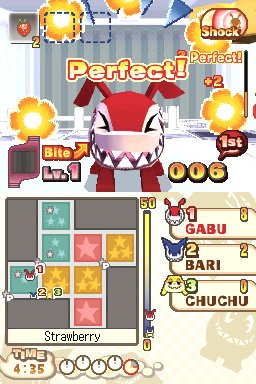 Prey the Stars is a fantastic handheld title that seemingly fell through the visible cracks of most gamers (myself included) when it was released in 2008. I can't recall what type of advertisement campaign followed this title to shelves, but to be honest, the actual title and the packaging are far from enticing to the casual on-looker and definitely dissuaded more than a handful of potential buyers to drop their bucks on something else. But I am here today to let the world know - do not let the marketing department at KOEI mislead you though - this game was not developed as a joke of a children's title as the cover may seem to display. Prey the Stars was crafted from the bowels of the arcade generation, for gamers with a taste for classic gaming sensibilities and high score frustrations.

A true arcade title at heart, this high score marathon has players eating, licking and sucking down their gullets anything from strawberries to submarines to entire planets as one of four over-the-top, Domo-wannabes with insatiable appetites. The bigger the object, the higher the point value; suck down some randomly appearing bonus point sprites at the same time and that score lands a sweet little bonus. Eat three items of the same element and a very Mario-Kart-esque roulette power-up is the player's gift, which may result in a power-up for personal consumption or enemy destruction or a transformation item that turns your character into an insane, chomping monster who can eat all items and players it comes into contact with (not unlike Pac-Man's power pellets).

What makes the game great unfortunately is also what makes the game a bit of a letdown if it were to be purchased for the full asking price of $30. There are 11 levels, each with a different theme, different environmental wrinkle, different set of goals and different set of edibles, yet none of those create any real sense of distinction between the majority of them because they share far too much in common. The AI is solid more than its loose, but the frustration can mount when the computer characters either ramp up their intelligence too high on the fly or float around like imbeciles while you truce them as if they weren't even there. The stat-boosting armor that randomly doesn't drop often enough following each round, known as skins, are made to seem important by in-game prompts, but honestly, choosing the right character is far more integral to winning than any of the boosts gained from the skins.

The end result is a calculated, slower paced Mario Kart with a hint of random item looting with little to offer outside of the in-game action that may be just too inaccessible for the younger crowd it was seemingly advertising to but is a great small burst time waster for the older fingers crowd. Especially if multi-player games are a big deal as rounds start out quiet and methodical before bursting into total chaos as the end draws near. Prey the Stars is exactly what one should look for in a quality bargain bin game - high quality, over abundance of copies and a low price tag.
Review Page Hits: 0 today (83 total)
mediahook