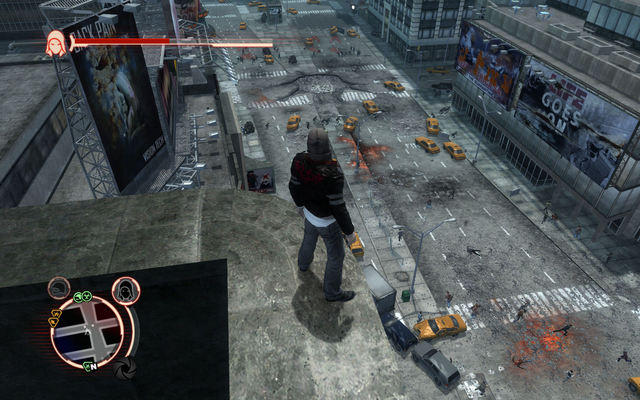 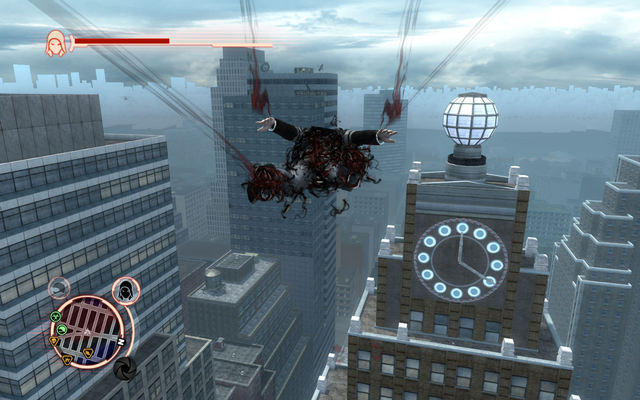 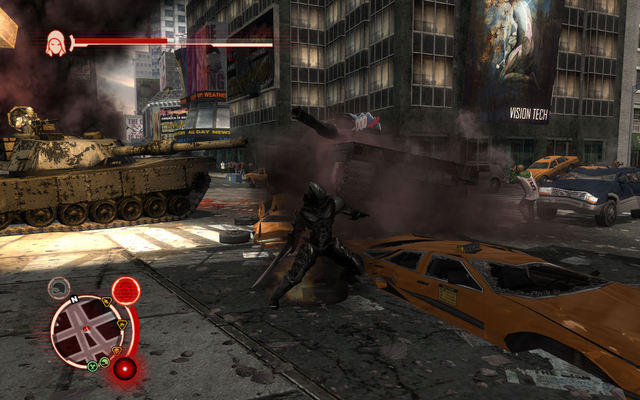 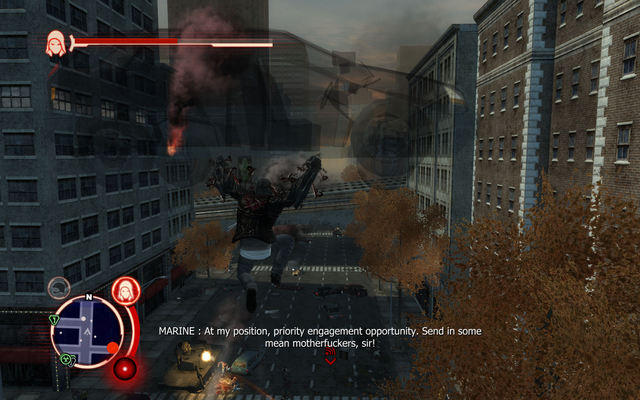 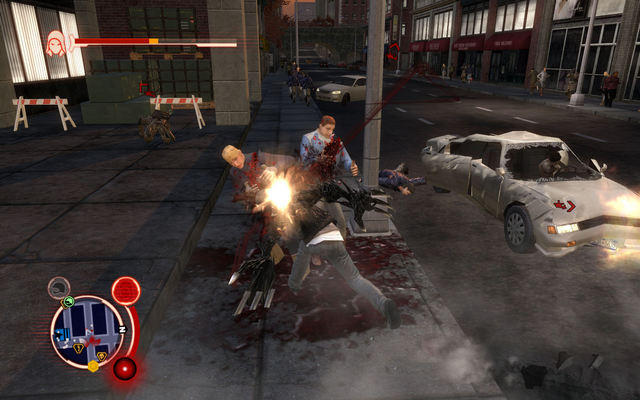 Prototype is clearly marketed to angry, testosterone-filled adolescents who would like to be all-powerful. As such, it lacks any significant depth to its plot or character development. The story is rather generic, but has a few 'twists'. A viral outbreak on Manhattan Island triggers a military lockdown and the main character wakes up on an autopsy table having been mistakenly presumed dead. He can't remember who he is or how he got there and spends the rest of the game trying to figure it out and 'punish' the people responsible. There aren't many plot points in the game. Most of them are told in an abstract, stylized way that leaves the player guessing at their meaning, and there are a lot of unanswered questions.

General: At its core, Prototype is a button mashing brawler played out in a massive free-roaming city. The player can run up walls, glide over short distances and perform amazing acrobatics like running head on into traffic and effortlessly vaulting over cars without missing a stride. All that makes the gameplay very impressive initially, but that good first impression is quickly overwhelmed with repetitive gameplay, environments, enemies and a lack of a meaningful plot line.

Player abilities: You start with a few abilities/attacks then gradually buy more with points earned from defeating enemies. Unfortunately, the massive number of new moves available are mostly useless. They aren't significantly more powerful or more suited to some situations. They just look different- as in 'stomp enemy from above', 'body slam enemy' etc. so you're likely to actually only use a few of them. The player can kill an NPC then assume their shape, but there are only about 10 different NPC models in the game with no real difference between them, so the ability is nearly pointless. You can hijack combat helicopters and tanks later in the game which adds a nice twist, but the vehicles are so fragile (2 to 3 hits usually destroys them) that they are useless in most fights.

Combat: Combat is fast paced and chaotic, especially in the last half of the game. Enemies spawn endlessly, making it impossible to clear an area, and they tend to attack you from all sides with inhumanly accurate explosive rounds, or by throwing things at you that send you flying. That makes it very hard to fight intelligently, and you can't really win against the endless enemies, so you'll mostly be using hit and run tactics.

Controls: All the moves are triggered by the same 5 buttons pressed in various combos. The result is that you'll frequently be performing an undesired action- especially in the heat of battle. For example: the left mouse button is a basic punch, but if the player is off the ground even a tiny bit (ie walks off a curb, or hit by a blast) L-mouse sends you flying across the screen in a jump kick toward a random nearby target. Another example: if you try to trigger a 'super-move' to kill all nearby enemies (Hold E key then press R-Mouse), your character usually just turns and grabs some nearby piece of debris (press E key) instead of performing the super-move. Actually, trying to enact a super-move made me die far more often than it saved me. The temperamental controls are why I gave a low score on learning curve. It takes a lot of trial and error to learn how to successfully utilize many of the attacks while avoiding their quirks.

Missions: The main game is fairly short, taking about 6 hours to complete, and missions include things like 'kill enemies before they escape', 'protect vehicle from attackers' and 'sneak into military area'. All in all, there is not much variety. There are a lot of 'side challenges' to earn extra points. Most of them are timed and consist of things like 'defeat all enemies within the time limit' or 'run through the course within the time limit'. They tend to be very repetitive and quickly lose their appeal.

Violence and profanity: I'm not adverse to violence or gore in a game; it can make a game poignant when it fits the plot's situation. But in Prototype, the violence is just repetitive and without meaning beyond raw, psychotic-like brutality. There are masses of pedestrians on the streets and soldiers trying to save the city from the progressing viral outbreak; even if you try to avoid it, you'll end up decapitating, disemboweling, or otherwise turning into goo literally thousands of innocent people throughout the course of the game. The battle system auto-targets innocents just as much as enemies, and they cower brainlessly in the middle of battlegrounds, making it impossible to avoid them. In addition, you are required to violently kill them (as they beg for mercy) to regain health through the game. Everyone in the game spouts masses of profanity in a very forced unnatural way- 'The F-in target is on the F-in move. Send F-in reinforcements F-in now!'

There is no music in the game except during a few special scenes, and even then it is mediocre and uninspiring. There are decent sound effects consisting of the normal city bustle and battle sounds. It's enough to make it feel real but nothing that stands out as spectacular. There is decent, but over-macho, voice acting.

Overall, the graphics are good. The player's animations look powerful and impressive. Enemies and vehicles are modeled quite well, but the city buildings and pedestrians are mediocre and repetitive. Buildings are mostly just blandly colored boxes with symmetrical windows. There are a few trees, but they all look alike. It should be noted that there are no loading screens while traveling around the huge island, and there is a tremendous amount of activity around the player at all times. I don't remember any other game that accomplishes so much onscreen activity without any lagging or hiccups. Medium detail on buildings and pedestrians seems like a small price to pay for good performance even during massive amounts of activity. The physics are off and objects seem too light, so they tend to bounce around and 'float' much more than they would in reality.

After the end of the main game, you get to continue playing. There is no more plot development or main quests, but you can complete any side 'challenges' you missed along the way. It's easy to earn enough points to buy all the special moves during the regular game, so I can't picture much motivation to continue playing. There are no unlocked bonus materials, plot variations, or multiple endings that would encourage a second playthrough.

Prototype has original and impressive player moves and an equally impressive bustling and seamless play area, but once the initial novelty wears off, there's not much left to keep it interesting. Killing wave after wave of repetitive enemies with no motivation can only carry you so far. The plot has some good building blocks, but characters are not well developed and behave inconsistently so it's hard to really care what happens to them. I don't think I would recommend Prototype to anyone. Most people would get bored quickly, and there are certainly better games out there for the buck.
Review Page Hits: 1 today (286 total)
mediahook