Psychonaut's large cast of characters, wacky humor and unique level design make it a valid entry in the platform genre, one that should please all gamers. 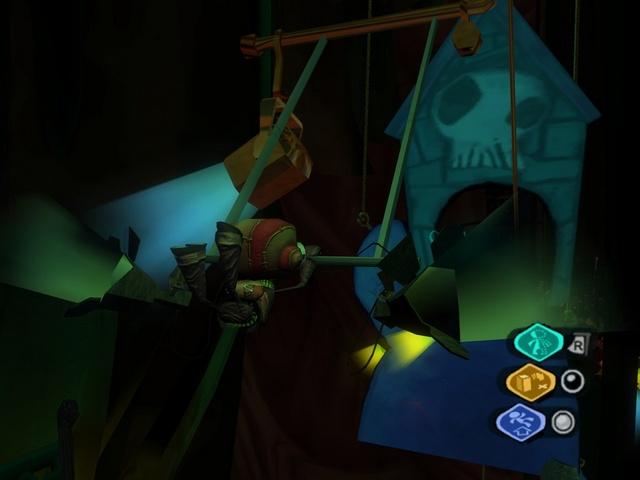 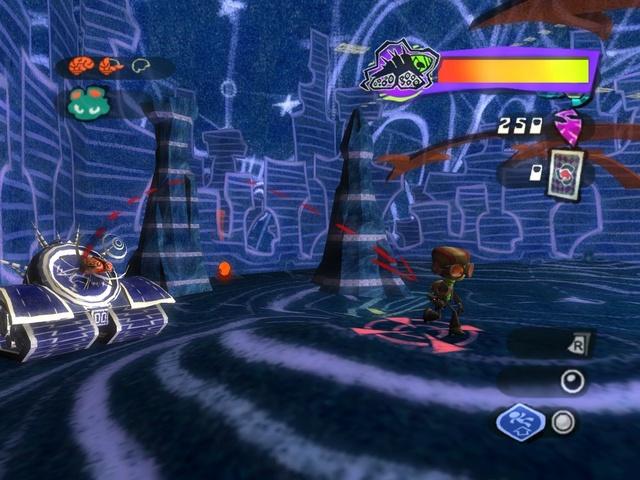 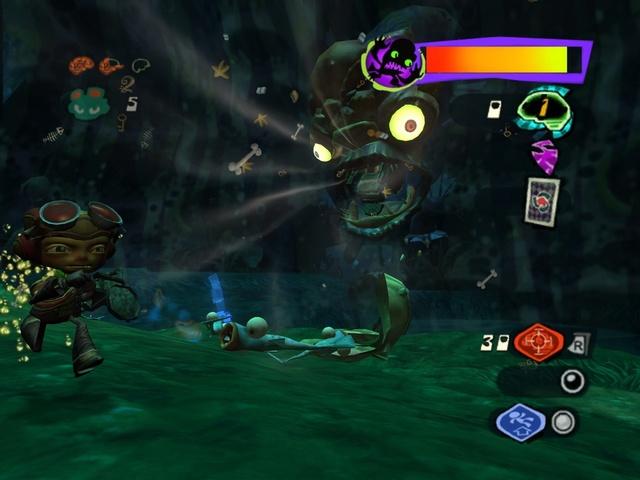 It's a shame a game as good as Psychonauts has been pushed under the radar by gamers. Since its release back in the Spring of 2005, it has received nothing but critical praise from reviewers, and yet it still goes on unnoticed, which probably makes Mr. Tim Schafer cry considering he is one of the most talented and respected gaming developers in the business. Hopefully this review will help some of you slackers actually go out and pick up the game.

Part of why Psychonauts sold so poorly may be due to its wacky style. For instance, the game looks like a cartoon, but that doesn't necessarily mean it plays like one. All of the locales, characters, moves, etc have that unmistakable cartoon feel, and it stays true throughout the entire game. The game is absolutely gorgeous, and some of the level designs (Milkman Conspiracy and Black Velvetopia especially) are some of the best ever witnessed in any game. These environments are lush with vivid detail, and not once did the framerate drop, even with many things going on almost seemingly at the same time. The character models are great too.

But still the game sold bad. Ok, let's try to make this game sound better. The gameplay is definitely the highlight of the game. The story begins with kids attending a camp for would-be Psychonauts, a group whose job is to enter the minds of people and attempt to destroy inner monsters or demons one has. Sounds like a cool gig. The story soon focuses on a lone young hero, Razputin, who ran away from home in order to train to become a Psychonaut. Things start going awry as the campers' brains start to end up missing, and the only person who can stop it is Raz. With the help of an old Psychonaut, Ford Crueller, Raz will enter the various minds of memorable people, showcasing his Psychonaut skills.

The game picks up almost immediately, although it may take some over an hour to complete the initial training process. But after that, the game ushers in a unique blend of fun and charismatic flurry. This game's humor is untouchable, clearly one of the most creative and funniest games ever to grace a gaming console. The humor is the driving point of the story, and the story is what makes you want to play more. What makes the story so damn funny is the large cast of characters you meet, as well as those who you actually get to enter their minds. A few of these people include a paranoid security guard, whose mind creates a '50s style suburban neighborhood complete with CIA guys in trench coats, as well as a mental patient who believes he is Napoleon Bonaparte whose mind is laid out like a Risk board. The cast never ceases to amaze, and there are more than 50 in the game, who undoubtedly you will remember long after you play due to the intense humor and wacky dialogue.

But the main point of the game is using your Psychic powers to stop the person responsible for stealing the campers' brains. There are 10 moves to learn throughout the game, where you can three of them at any given time. Once you earn the necessary requirements, you will end up learning one. Some moves require completion of a mission, while some need you to simply gain a rank. At the start of the game, players are awarded with a Psi Cadet Rank of 0. Hurray! By collecting numerous items, that rank will steadily increase, resulting in a new Psi Move or an upgrade. Such items which can be collected are Figments, which are multicolored pictures depicting images of the person's thoughts. There are many in each world, and the more you collect, the more ranks you will obtain. Cobwebs (for those emotional thoughts you keep hidden), luggage (for that emotional baggage) and other funny items are scattered throughout the worlds as well, and can be used to up your overall rank. There is also the essential currency, which in this game are arrowheads which are also scattered throughout the many worlds. The arrowheads basic purpose is to purchase items to help in quests, such as dream fluffs, which act as Revive, and Dowsing Rods, which help to find hidden arrowheads.

As stated before, the levels in Psychonauts are some of the most creative ever witnessed in a video game. From entering the mind of a war-torn counselor who was once in the Army, to a black velvet laid area with a raging bull and dogs who sell magical paintings, each world offers its own unique crazy blend of fun and intrigue. While some of them are somewhat disappointing, (The roller ball inside Gloria's mind), some of them are incredibly fun to partake in. But in hindsight, the levels are definitely what you will remember most out of Psychonauts, and it may even inspire some developers to be as creative as this game is.

The game is also somewhat on the easy side, which may be a turn-off for older gamers. Mixed with the cartoonish style and the wacky humor, the poor sales may be contributed to the overall subject matter. However, given the feelings witnessed through playing Psychonauts, it can be clearly said now that all gamers, old or young, will love this game.