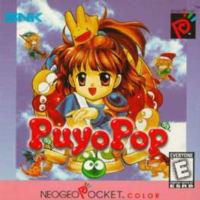 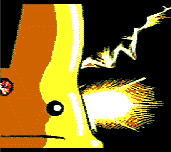 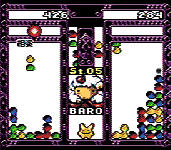 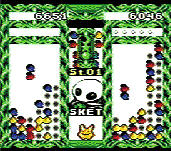 Sega's classic puzzle game franchise returns in form on the Neo Geo Pocket Color. Puyo Pop is a mix between Super Puzzle Fighter and Columns to put it best where you must connect four puyos together to have them disappear and to create combos. Once some puyos pop and disappear from your side, black puyos fall on your opponent without warning to trip them up.


Gameplay & Control
Along with customizing your game, there are three modes of play in Puyo Pop: 1P vs COM, 1P vs 2P, and Self Dev. 1P vs COM is where you advance through various amounts of levels playing against a set number of computer controlled opponents. 1P vs 2P allows you to link two NGPCs together and play against a friend. Self Dev acts as half tutorial, half challenge mode that's broken up into two parts: 1P and Exam. In 1P you select a level and test your self to see how many puyos you can make pop, the biggest chain you can make, how long it takes you and how many levels you can go through. Exam is challenges that have predetermined obstacles you must overcome to move on like already having three rows of black puyos to make pop.

Two puyos, liked together, fall at a time. you can rotate them buy using either the A or B button, depending on direction, to have them fall how you want using the analog stick. Simple in concept yes, but difficult to master. Creating one or two combos is easy enough, but to perform maximum damage on your opponent having four or five combos is best. Overall the control is tight and intuative.


Graphics & Sound
Portable puzzle games are not normally known for their looks so Puyo Pop has a refreshing look so to speak. The graphics are sharp and colorful, and the puyos as well as the characters are nicely detailed. The colors have a darker hue to them, making them resemble console versions of the game more than looking like a portable game, but the white background can seem bland at times. The sound is also nice, and the music doesn't get annoying. Also, the characters shout out during play, but they never get repetative or annoying either.


Replay Value & Closing
Two player modes are always fun in portable games especially puzzle games, so this mode will have you coming back. The main drawn is the Self Dev mode that is nicely engaging and pretty long lasting. Either way the game is fun and fast to play, making it nice to pick up to kill some time. This game is a great puzzle game and portable game all around.