Someone got some Puyo Puyo in my Tetris! 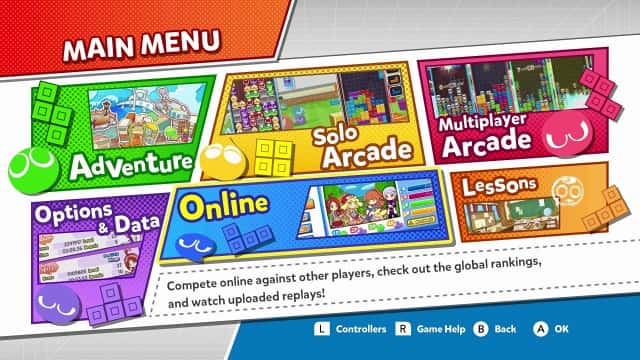 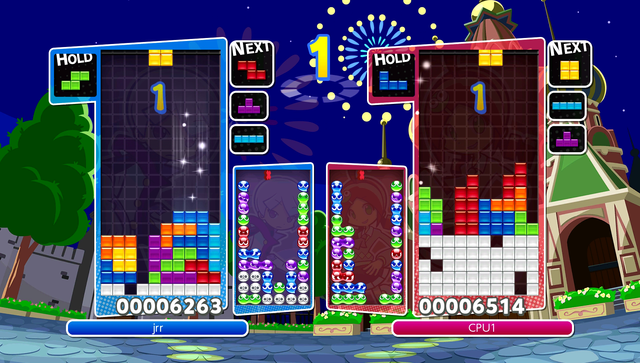 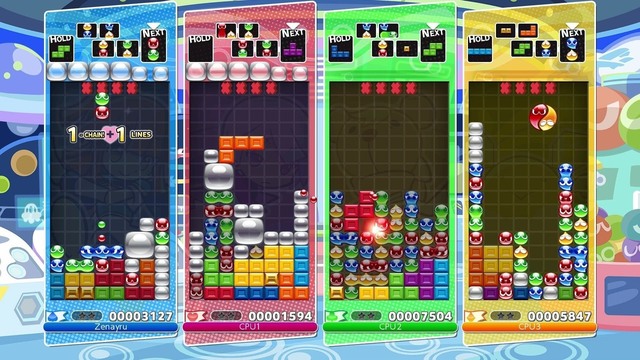 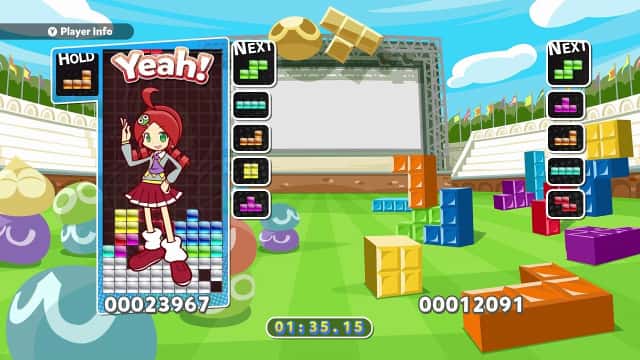 And it's dee-licious! Like interesting combinations and inventions over man's time on this great green earth, there have been fantastic ones like peanut butter and chocolate, Oreos and ice cream, and so forth. Likewise, there are also less enticing ones (a popular pick in the current culinary climate is pineapples and pizza). In any case, Puyo Puyo Tetris fits in the former category, a tremendous combination of two puzzle game titans (well, Puyo Puyo less so, of course) that brings a lot of fun and content to both the Nintendo Switch and PlayStation 4.

Addictive is an apt adjective to describe the gameplay of both Puyo Puyo and Tetris. With Puyo Puyo, you have colored blobs (the Puyo) that fall from the top of the screen to the bottom in pairs. To score points, you need to have four of the same colored, adjacent Puyo match to clear them from the board. This is the simplest form of Puyo Puyo, however, as the strategy, complexity, and depth of the game changes, you will need to create chains, where popped Puyo clear the way for already laid Puyo to fall down like a waterfall, scoring more points once they fall onto resting matching Puyo.

Meanwhile, Tetris is more well known as a puzzle series, where the goal is to take the falling Tetriminos (again, falling from the top of the screen to the bottom), move them around, and place them at the bottom of the screen. You score points by clearing lines -- having one or more horizontal lines completely full of Tetrimino blocks. High points come from clearing more lines at once (achieving that awesome Tetris of four lines at once) and scoring combos.

Puyo Puyo Tetris will certainly put your skills of both game modes to the test, and if you are a complete beginner (which I pretty much was), there are many beneficial in-game lessons and beginner modes to get a taste of both Puyo Puyo and Tetris. The myriad modes show a game seriously loaded with content, whether it's alone, with friends locally, or against players worldwide. Between the half-dozen unique Challenge modes, quick-to-play / tough-to-master Arcade modes, and Adventure Mode, you will be getting a massive amount of value with your gaming dollars.

For any puzzle party game worth its weight in falling garbage blocks, a competent Versus mode is a must, and thankfully, Puyo Puyo Tetris has it, and in spades. When playing casually or competitively with friends, family and the computer, a player can choose whatever puzzle mode they prefer, whether Puyo Puyo or Tetris. Thus, two players can be engaged in totally different puzzle modes while competing against one another. For Puyo Puyo players, a simple two-chain combo will send a slew of garbage blocks that get in the way of their progress. Meanwhile, Tetris players need to organize a multi-line clear or set of combos to drop garbage on their opponent. As you can probably guess, one is definitely easier to do than the other, and much quicker. And I'm not feeling any sympathy for the Puyo Puyo player, if that helps you guess.

The Adventure mode in Puyo Puyo Tetris was my go-to mode for single player action. The story revolves around the universes of Puyo Puyo, featuring a wacky cast of high school anime characters, and Tetris, made up of a starship crew that is on the more serious side (though about as serious as a game with a cute sense of humor allows). Puyo Puyo blobs and Tetriminos are appearing in both universes with no apparent cause, so the two groups form a union to get to the root of the problem. A whole slew of colorful characters appear in the Adventure mode of the game, 24 in all (which all become playable in every mode), and through the mode's ten chapters (two of which were DLC in the original Japanese release), the story is presented through full body character stills in all their cartoony glory, with fully voiced English dialogue.

Each of the Adventure mode's chapters consists of ten levels, and they vary things up nicely so you're not doing the same types of modes or going for the same goals over and over again. It's true that you'll be doing a ton of Versus matches, yes, but sometimes you and your opponent are playing Puyo Puyo, or one is playing Tetris while the other plays Puyo Puyo. Outside of Versus content in Adventure mode, there are trials like trying to reach a certain number of points or reach a line clear threshold before time runs out. In addition to just completing the levels, you can earn up to three stars on each, with goals ranging from beating your opponent in a number of minutes to reaching a specific number of points.

One thing I especially liked about Adventure is if you find yourself reaching a dead end -- that is, a level that you just can't seem to complete no matter how many times you try -- there is an option to skip that level and move on to the next. As someone whose puzzle game skills leave a lot to be desired, this optional choice was a gift from the puzzle game gods. Or Sega, whichever you prefer. Of course, it was totally a last resort and used sparingly. Totally.

Regarding other modes, I feel Swap is one that works well. It has two different boards, each with one puzzle style on it, that opponents play. After time ticks down enough, the boards switch, so if you were playing on a Puyo Puyo board, now you're playing on a Tetris one. The strategy here is when to time clearing lines or chains to drop garbage blocks on your opponent. Not just when it's most opportune like an ordinary Versus match, but deciding which board of your opponent's you want to drop them on.

Meanwhile, Fusion is true to its name, but a mixed bag. It certainly is a mode that has the highest learning curve to me, and for that reason, it might not be everyone's cup of Puyo Puyo tea. Here, falling pieces alternate from Puyos to Tetriminos and back again, Tetrimino pieces that no more than touch anything stay in place, and it makes for a tough time when a board is stacked high with little room to work with. Though garbage blocks are crushed underneath the weight of any falling Tetrimino, crushed Puyo Puyo fall from the top of the screen. If you have the rules of Tetris and Puyo Puyo hardwired in your brain, you're going to need to do some reconnecting to get a grasp on Fusion mode.

Puyo Puyo Tetris is a robust, mode-rich puzzle game perfect for quick burst plays or extended sessions in the single player modes, specifically the wacky, endearing, and delightful Adventure mode. Whether you're a Puyo Puyo fan, Tetris lover, beginner, or veteran, Puyo Puyo Tetris has something for everyone. Puyo Puyo and Tetris are a winning combination.
Review Page Hits: 0 today (297 total)
mediahook