Although the subject matter is similar, there are other movies that do it much better. 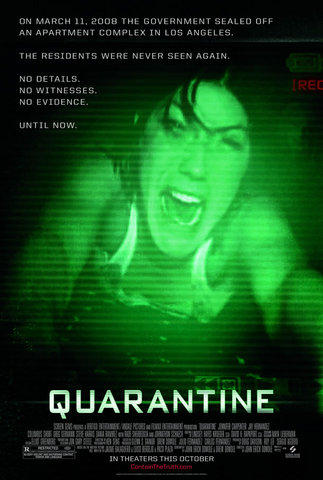 This is a movie about a news team that goes along with the local fire department on an average night, only to get stuck in an apartment building which has been quarantined due to an outbreak of a strange disease. It is shot in a similar style to Cloverfield or The Blair Witch Project. The film is very drawn-out and repetitive. I would not recommend this to anyone that is not a fan of Cloverfield, as there is not much more to like about it, other than the similar film style. Very disappointing.

Apparently, Quarantine is a remake of the "cult hit" Rec. So, now, Hollywood has run out of books to make movies out of, and has been reduced to make movies out of movies. Meh.
So, let's talk about the movie. For starters, Oscar worthy this attempt is not. The acting is shoddy at best, with the lead role so aggravating and whiny you find yourself asking multiple times why this chick doesn't just jump out the window. That would fix the entire situation.

There's not a whole lot of action here until about 20 minutes before the end of the movie. The characters start dropping like flies once they figure out what the disease is. Not giving any spoilers, but when you find out what is causing the "disease", you will be pissed. It's something that could not happen in the US. We'll just leave it at that.

So, what's good about this movie? Well, gore porn addicts will love the grotesque view on human behavior. Let's see. Someone gets beaten to death with the camera through which POV you are watching. (It's interesting to see the teeth & face pieces being wiped off the camera afterward, which is the only time you see the person behind the camera.) Someone else gets attacked by rabid dogs (oops, did I say too much?), a dog gets sledgehammered "Dead Rising" style, and an infected tenant falls down 4 flights of stairs like a ragdoll, banging off the rafters. So, yea, gratuitous violence, check.

The love interest between the main character, Angela Vidal (played by newcomer and soon to be no-name Jennifer Carpenter) and Firefighter Jake (Jay Hernandez) is minimally believable, and the theme that plays throughout the film of "Governement not having control" (A police officer cries over shooting an infected civilian that is attacking him) is childish and jokingly abysmal. Apparently, the R-rated movies appeal to the 14 year old demographic now.

In any case, a serious fan of this genre will like this film at the very least as a precursor to Cloverfield 2, or until the next Rec remake is made. Everyone else should stay away. Stay far, far away.
Review Page Hits: 0 today (37 total)
mediahook