One small step for monsters, one giant leap for monster-kind... Unfortunately for all involved, that leap was backwards. 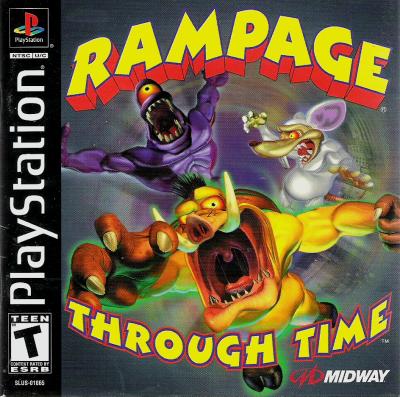 In my never ending quest to play crappy games, I sought out the red-headed stepchild of Rampage games - Rampage Through Time. On paper, this Playstation-exclusive Rampage title has a lot going for it: It supports up to 3 players, there's 20 different time periods to go through and destroy (including such varied locales as the Old West, Ancient China, Atlantis, and even "Dickens," which until now I've always heard referred to as the Victorian era), and there's a bunch of mini-games thrown in to help break up some of the monotony that usually sets in with Rampage games after a few levels.

In execution, however, there are a lot of design decisions where I couldn't help but wonder what the developer/publisher were thinking when they approved them for the final game.

Rampage Through Time is the fourth game in the Rampage series, being preceded by the original 1986 Rampage, Rampage: World Tour (more of the same, but with fancy new graphics and a few new moves), and Rampage 2: Universal Tour (even more of the same, but with some new monsters). All three of the previous games were fun for a short while in single player and fun for a much longer while if you add a friend (due to the play style being a mixture of both cooperative and competitive).

A lot of the things that made the previous games fun (even if only for a short while) were inexplicably thrown out the window for Rampage Through Time.

The biggest and most glaring problem with the game is single-player Adventure mode. It isn't even really a single-player mode, as you are always accompanied by two other AI controlled monsters. This was annoying in Mario Party, and it's annoying here. For whatever reason, the developer opted not to let you play through Adventure mode in multiplayer. So it's always just you and two other AI monsters versus each other and the world.

Another immediately apparent design flaw is that all the monsters must stay on the screen at the same time - even in the "single-player" mode. This means when you want to move to the left or the right of the screen to start tearing down a new building, you'll sometimes find the AI monsters want to sit and twiddle their thumbs or thumb-like appendages at the opposite end of the screen so you can't get where you want to go. This is where having a live partner would be far more useful than an AI partner. Even the stupidest player understands the concept of needing to scroll the screen to get to the next few buildings. And of course, if you try to go over to their side in the hopes that they'll scroll the screen that way, you'll end up with the two AI monsters beating up on you and still have maybe of 50/50 chance of the game letting you scroll to the next set of buildings.

Another problem with the game is the buildings are all incredibly small. The original Rampage and even the sequels had you scaling some relatively impressive buildings, but in this one, I've rarely seen anything that is more than three or four stories high, which really defeats a lot of the fun in the game.

Sadly, there's also quite a lot of loading throughout, which doesn't make much sense given the limited (and often recycled from city to city within each time period) graphic detail used in the game. Perhaps they could have improved that as well, had they not required 3 "players" all the time.

Rampage Through Time has two multiplayer modes in it, but the cooperation aspect found in the previous games has been completely eradicated. The Tournament mode will have you playing rounds of 3 cities each followed by a minigame. Whoever wins the minigame wins the round. Yes, it lets players go wild and destroy the cities the way they always wanted to, but any potential for cooperation disappears due to the way the game is set up. In every city, the players are graded in three areas: destruction of buildings, destruction of vehicles/people, and damage inflicted on the other monsters. Players earn a star for each of the categories they ranked highest in at the end of each city. These stars affect the minigames - the more stars a player has, the easier it will be for them to win the minigame (and thus, the round).

The other multiplayer mode is Challenge mode, which does away with all the traditional Rampage portion of the game entirely, and instead contains nothing but the minigames.

The minigames are, for the most part, quite unspectacular. Most of them are very limited Rampage-themed version of older games such as Combat, Arkanoid, Snake, etc. There's even a take on the classic arcade game Warlords. Usually, though, by the time the minigame ends, you'll be more than ready to go back to the regularly scheduled destruction of cities.

Or, more likely, you'll be ready to turn it off and go back to playing good games again.